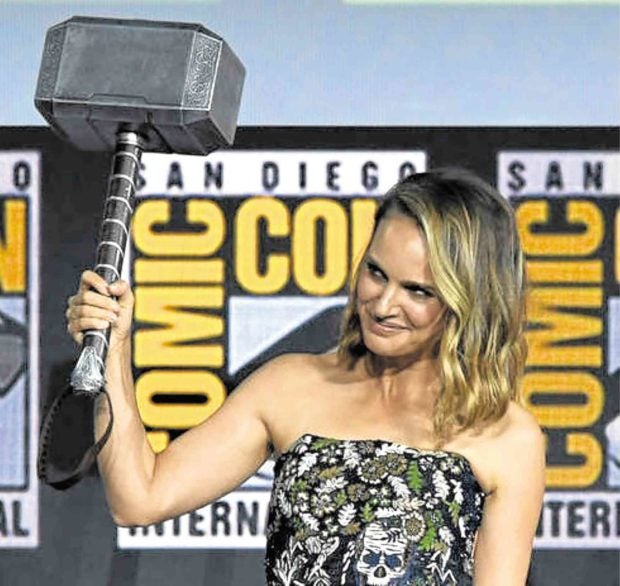 After the blockbuster success of Wonder Woman and Captain Marvel’s solo movies, the floodgates are open for more powerful superheroines leading their own films.

Natalie Portman, who starred as astrophysicist Jane Foster in the first two “Thor” films, skipped the third one, but will be back to reprise her role with an extra identity—the new Thor, goddess of thunder.

While the actress was unsure of her future in the Marvel Cinematic Universe in 2016, when she told an interviewer, “Hopefully, one day, I’ll figure it out,” it was announced at the San Diego Comic-Con last week that Portman would reprise Jane Foster, who will be worthy to wield the mighty hammer Mjolnir and become the mythic being.

At the event, she was introduced onstage by “Thor: Ragnarok” director, Taika Waititi, who will be back for the fourth film, “Thor: Love and Thunder.” Joining Chris Hemsworth and Tessa Thompson, Portman was handed a replica of the hammer prop by Waititi.

On Instagram, the actress posted pictures of the announcement and wrote, “So thrilled to share the news with you today at [SDCC 2019] that I’ll be returning to the [MCU] as female Thor with legends [Taika, Tessa] and [Chris]. (Remember this as the ‘before’ picture for when I get jacked).”

In the comics, the cancer-stricken Jane Foster was deemed worthy to wield the power of the Asgardian hero, vanquishing evildoers by herself and as a member of the Avengers. —OLIVER PULUMBARIT