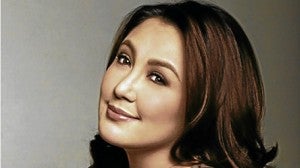 SHARON CUNETA: They never let up on hurting my family

Although singer-actress Sharon Cuneta would rather not dwell on it, her rift with aunt Helen Gamboa has made the rounds in media and cyberspace and has become difficult to ignore.

In an exclusive interview with the Inquirer, Sharon described the tension, ongoing for years now, as “painful.”

She would rather not go into details, she said, since she is not inclined to discuss family problems in public—something she learned from her parents and, in fact, her Tita Helen (younger sister of her mom, Elaine).

But she did go as far as to say that it is disheartening, the way politics has driven a wedge between them.

For years, the two senators have been at loggerheads over so many issues—starting with the 2004 presidential elections and culminating in Tito’s failure to support Kiko’s 2010 bid for the Senate presidency.

Two years ago, Sharon and Helen stopped talking to each other, after yet another controversy involving their husbands. In televised and published reports, Tito had harsh words for Kiko, Sharon recounted.

“The reason we stopped talking was that they never let up on hurting my family,” Sharon said. “How can they say they love me, and yet not give my husband a chance? Tita Helen said that my Uncle Tito’s vote (in the Senate) did not matter. But that one vote would have meant the world to us.”

The incident surfaced again in a print interview that Helen gave last week, where she responded to Sharon saying in another interview: “Yes, politics does divide families, like when my uncle says something bad about Kiko…”

If she expressed dissatisfaction, Sharon said, she was just calling a spade a spade.

“It is not like it did not happen,” she said. “It was reported on television and in newspapers.” She found the situation “sad.”

Sharon lamented: “She is my aunt. She is among the people who taught me… not to wash dirty linen in public. This feud is old news. Now, I have to talk about it again because it has been turned into a spectacle. I am shocked and confused.”

She is also stunned that Helen said she had become “unreachable,” that she had changed because of “wealth and fame.”

Sharon quipped, laughing, “My weight may fluctuate, but I have not changed. What has changed has nothing to do with money. I have been doing well for so long in that department, long before this problem. I just… grew up.”

But she pointed out that she campaigned for Tito in 2010. “I am not asking for anything in return,” she said. “That is what family is about. Sometimes I feel that I am regarded as family only when it is convenient.”

Perhaps, she said, her aunt still saw her as the teenager who would invariably make the first move every time they had a misunderstanding, no matter who was in the right.

“I am no longer 12 years old. I am 46. I have my own life now. I have bigger problems to contend with,” Sharon said. Her priority is her mom, Elaine, her husband and her children, Sharon said. This makes Sharon not just a niece, but also a daughter, wife and mother.

“My heart broke when I saw my daughter Frankie cry over this problem [two years ago],” she said. “I cannot forget [that].”

Yet she considers this as another opportunity to learn and grow. “My eyes are wide open now,” she said. “As you grow older, you become bolder. I cannot just swallow my feelings every time something goes wrong.”