Duterte pokes fun at Chavit for viral video with Catriona 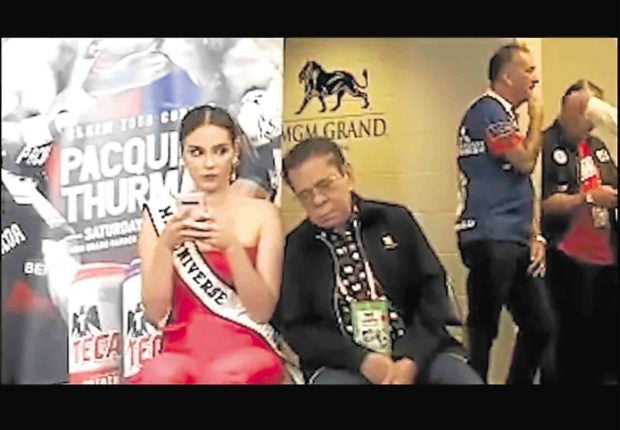 “May the next mission be accomplished.”

President Duterte on Thursday afternoon could not resist poking fun at Narvacan, Ilocos Sur Mayor Luis “Chavit” Singson for what he did to Miss Universe 2018 Catriona Gray as seen in what has become a viral video.

The 10-second video showed Gray using her phone while Singson appeared to be taking a nap beside her in a waiting room during Sen. Manny Pacquiao’s fight in Las Vegas over the weekend.

The former Ilocos Sur governor was seen leaning toward Gray’s shoulder, but woke up when the beauty queen took notice.

In a speech in Candon City on Thursday afternoon, the President jested that Sen. Bong Go, his longtime aide, showed him the “gimmick” video which netizens dubbed “Galawang Chavit.”

“He said, ‘Look at this Chavit.’ I said, ‘Don’t do that, because it may not be true.’ He may be sleepy, but…” said Mr. Duterte, eliciting chuckles from the audience.

He went on: “We do not have that kind of opportunity to be … So we can only say good luck and may the next mission be accomplished.”