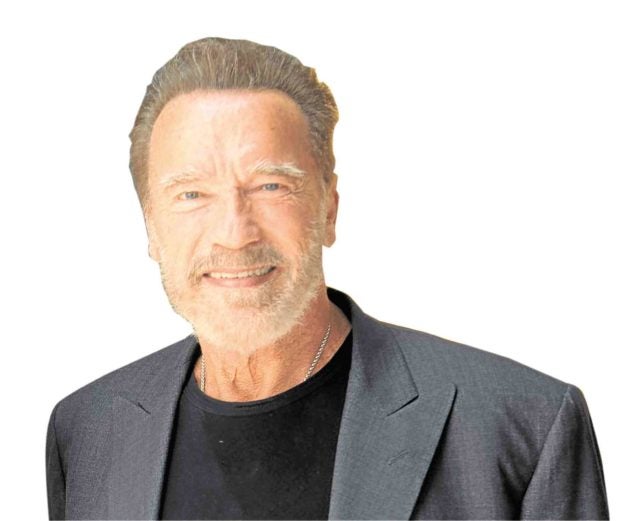 LOS ANGELES—No pressure, Chris Pratt. Your Terminator father-in-law is teasing you to “get going” and make him a grandpa.

Turning 72 this July 30, the former Mr. Universe and seven-time winner of the Mr. Olympia contest was candid about feeling the effects of age.

“I tell you that it definitely sucks when you get older,” admitted the “Governator,” as he was called when he became California’s governor.

Still, Arnold is “baaaack” in Tim Miller’s “Terminator: Dark Fate,” the sixth installment and the first since “Terminator 2: Judgment Day” to have creator James Cameron involved.

Linda Hamilton is also back as Sarah Connor after 28 years of sitting out the four sequels.

Do you look forward to having grandchildren? Are you trying to inspire Chris Pratt to get going with the action (laughs)? That’s funny. I will tell him; I will see him tonight. I’ll say, “Foreign Press says you should get going (laughs). No more waiting around.”

That is a very interesting question because there is something wonderful about getting older, smarter and wiser. And the most amazing thing is that, the smarter you get, the dumber you feel, because the more you realize, wait a minute, I didn’t know anything.

For instance, when I ran for governor and my heart was in it, I thought, I’m going to improve the state and I’m going to do X, Y and Z. But after it was all done, I said to myself, oh my God, how much I learned.

Sitting in Sacramento at the capital was like a university, where everyone comes in there and you learn about different subjects—health care, assisted living, food and education, after-school programs, military and how to prevent disasters.

It was amazing the kind of things you learned. So every year, as you go on in life, you start looking at the world differently.

Also, you become, in a way, kinder and not as egotistical.

But personally, would you like to be a grandfather? Yeah, absolutely. When it happens, it happens. I’m looking forward to it. I think any parent looks forward to becoming a grandparent. Katherine will most likely be the first one (to make me a grandfather) because she just got married. I don’t know about the other ones. But definitely Katherine—
she’s programmed for that, for creating a family.

These science fiction characters don’t usually age. But in this movie, the Terminator has aged. Can you talk about that and how important is that element to the story? The aging process already became clear in the last “Terminator.” We addressed that. Because the idea is underneath, the Terminator always has the same strength, power and all of the abilities that he has, but above is human flesh. And human flesh, that does age. So that’s what we see in the movie and there is basically reality.

But the key thing is, like I said, the abilities, action, stunts, all of that stays exactly the same.

I’m still the Cyberdyne Systems Model 101 T-800 and I’m still the perfect machine until more sophisticated machines come around like in “Terminator 2,” the T-1000.

In this movie, for instance, the Rev-9 has more abilities and is more sophisticated. 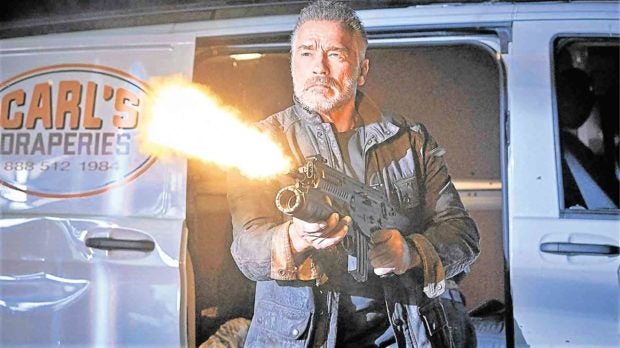 Linda Hamilton said her favorite scene was when your characters met for the first time. How was it for you to meet Linda again? To me, in the first movie—I remember it was in 1984—Linda said that what she remembered most was me appearing naked in the movie, that she liked that scene the best.

It was wonderful to see Linda come back. It says a lot about the franchise because you see all of those people coming back. Everyone wants to make this franchise successful and to make this particular movie very successful. I think that’s why Jim Cameron came back and was involved in creating the storyline and with the cowriting.

That’s also why Linda came back because Jim was back again, so it was great to have her back.

What’s amazing is it’s been more than 25 years ago since “Terminator 2,” and here she is, she’s still the toughest broad on the screen, and she’s totally believable.

Her physicality, when you talk about the stunts that she had done, she was willing to jump right in there. I’ve seen her do crazy stuff in this movie. She’s very tough.

Physical strength aside, what do you regard is your greatest strength? Physical strength does not come to my mind when I think about myself. It’s a side product of having been a weight lifter, power lifting, bodybuilding and strongman stuff.

But everything that I have accomplished is because of the power of my will and my visualization that I can see goals very clearly, then I go after that goal relentlessly.

Not everybody has this ability. Because I was never naturally the best in anything.

The same in acting—I was not born an actor. I got into it because of my physical development and one of my heroes Reg Park was an actor. He was in the “Hercules” movies, so I wanted to do the same thing. That’s how I got into acting.

Linda also talked about how she feels [like] a better version of herself at 62. Is that also how you feel? I’m happy that Linda feels better at 62 than she did at 32 because I’m not. I tell you that it definitely sucks when you get older.

I’m going to be 72 this year, on July 30th in case someone wants to send birthday gifts (laughs).
But I get affected by that even more so because I knew where I once was at the pinnacle and now, I’m not. So you kind of train every day to hold on to as much as you can.

My vulnerability has always been the heart, so I have to watch that carefully. I work out every day. I have great joy bicycling down at Gold’s Gym every morning and working out.

Then when you have a movie like this… all of a sudden, the pressure is on, right? Now, you have to perform.

So now, you train extra hard for that. You work with the stunt guys and you do cardiovascular and weapons training.

Is not being able to run for US President one of your biggest regrets? Let me just say that I’m never going to complain about the one thing I can’t do. Because remember that every single thing that I talked about that I was able to do—my bodybuilding career, the money that I made, my show business career, politics, my family—everything that I have accomplished is because of America.

Therefore, the only thing that I can’t do is run for president because I wasn’t born here, so I would never complain about that.

What are your thoughts on President Trump telling several congresswomen of color, three of whom were born in the US, to “go back” to their “countries whose governments are a complete catastrophe”? It was just a stupid thing to say. I cannot even put it in the category of prejudice … It’s just a lack of leadership and a lack of understanding of policy.

He still doesn’t get it that he’s president of the United States, and he’s not anymore the shyster real estate guy in New York.