Brad Pitt on Leonardo DiCaprio, rumors that he’s quitting acting and getting older 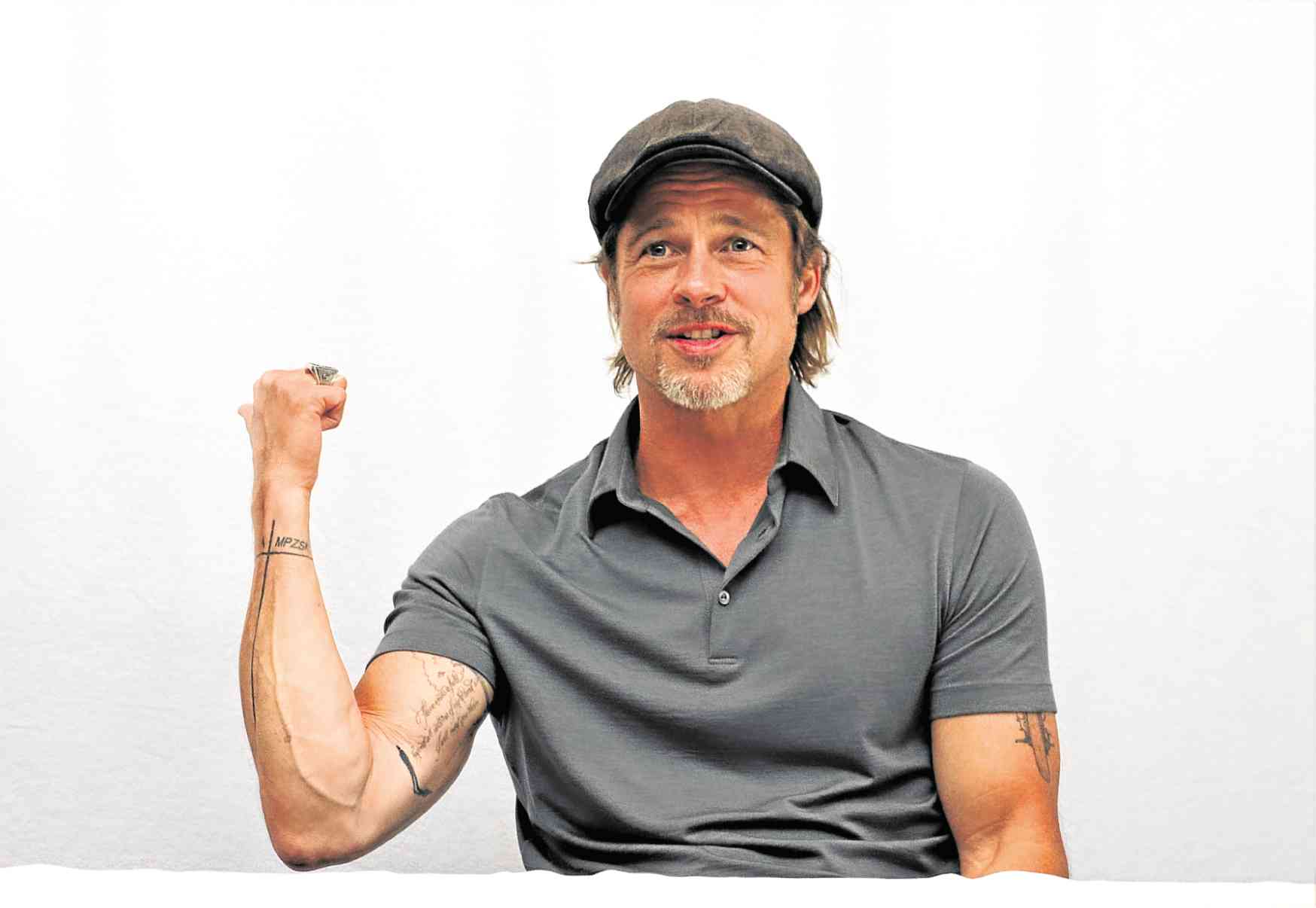 LOS ANGELES—“All right, let’s do this!” exclaimed a beaming Brad Pitt, carrying a glass with ice cubes and a Coke bottle, when he walked in at Four Seasons Hotel’s Il Posto restaurant.

“Hey, how ya doin’?” he asked as he sat down and poured the soda into the glass. Wearing a newsboy cap, polo shirt and dark slacks, Brad was clearly in a good, humorous mood today. At 55, the actor never looked better. With his tanned face and longish hair, Hollywood golden boy comes to mind. He and Leonardo DiCaprio, his “Once Upon a Time in Hollywood” costar, are probably among the few actors today who exude real Tinseltown glamour.

“I was making the point that I see it—it’s a big commitment to go and leave your family. A movie can be anywhere from three to six months. Fourteen-hour days are not uncommon. I was just trying to say it’s a younger person’s game.

“And as we get older, the roles are equally important, but they’re fewer and farther between. I would be less interested to commit that kind of time to it. But I’m still gonna do it as long as they let me do it. I just see it as not having the verve of a younger man.”

He stressed again that his fire for acting is still burning. “Oh, I still enjoy it. Absolutely. And the people I get to work with. But it’s important to me, like, if you’re going to spend the time, who are you spending that time with? And on what?”

In “Once Upon a Time in Hollywood,” director Quentin Tarantino’s glorious ode to La La Land, Brad got to spend time with Leo. It’s 1969, set against the backdrop of the Charles Manson murders.

Brad plays Cliff Booth, the stunt double of Leo’s Rick Dalton, a fading star. It’s engrossing to watch both who are excellent actors, but their good looks make some underappreciate their talent.

Asked if he became pals with Leonardo, whom he worked with for the first time, Brad quipped with a laugh, “Not really. He’s overrated (laughs). No, he’s a great egg. I got a lot of respect for him coming into this. I mean, the mark he’s left on cinema. His contribution is already pretty extraordinary.

“When it’s all on your back, there’s pressure that comes with that—and responsibility. But when you have someone of Leo’s caliber, he’s going to be holding up the other end of the table, and that’s a relief. We both popped about the same time. We both have grown up in the same ecosystem of filmmaking. We had to negotiate our way through it to survive it.

“When I say ‘survive it,’ [I mean] it’s an industry that can chew you up and spit you out pretty quickly. I respect Leo’s choices and what he’s done. But because of that, we have this instant reference point. We have lost that privacy in a way.

“And us doing this film, understanding this camaraderie, about an industry that we love, hate and ultimately adore. It was really comfy from day one. And I think it shows. You can’t fake that.”

Brad also gets to be chummy with Brandy, a pit bull owned by his stuntman character. We said that the four-legged actress was good. “And that two-legged handsome fella next to her,” Brad chuckled.

Brad, who was officially divorced from Angelina Jolie in April 2019, said that in real life, two canines kept him company these days. “I have two dogs at this very moment who I am known to have a cuddle with. And swim with. I think it’s in the movie—was the pit bull licking my neck?”

After hearing us say “Yes,” Brad said with the most winning smile, “All right. Tom Cruise has nothing on me (laughs).”

People magazine’s “Sexiest Man Alive” in 1995 goes topless on a roof in a scene. “I’m playing a stuntman, so I gotta be on the better end of shape,” he said with a grin. “So, I tried to eat right during the film. Got some exercise. And, that’s that. And then when it’s off, it’s Shake Shack and pizzas (laughs).”

“Once Upon…” magnifies the lives of stuntmen who live in the shadows of the stars they perform dangerous stunts for. Brad said the film made him appreciate more that cinema is the collaborative work of people in front and behind the cameras.

“There’s Leo, Margot and me, an entire cast around and then from 100 to 300 people behind us, on set, to make the film,” he pointed out. “What Quentin portrayed really nicely, especially with the Cliff character is that when the job ends, you’re hustling for another job.

“But beautiful things happen with streaming now. Because more than ever, more people—talented writers, directors, actors, are getting opportunities that weren’t available before. Because of that, we’re seeing this explosion of talent. 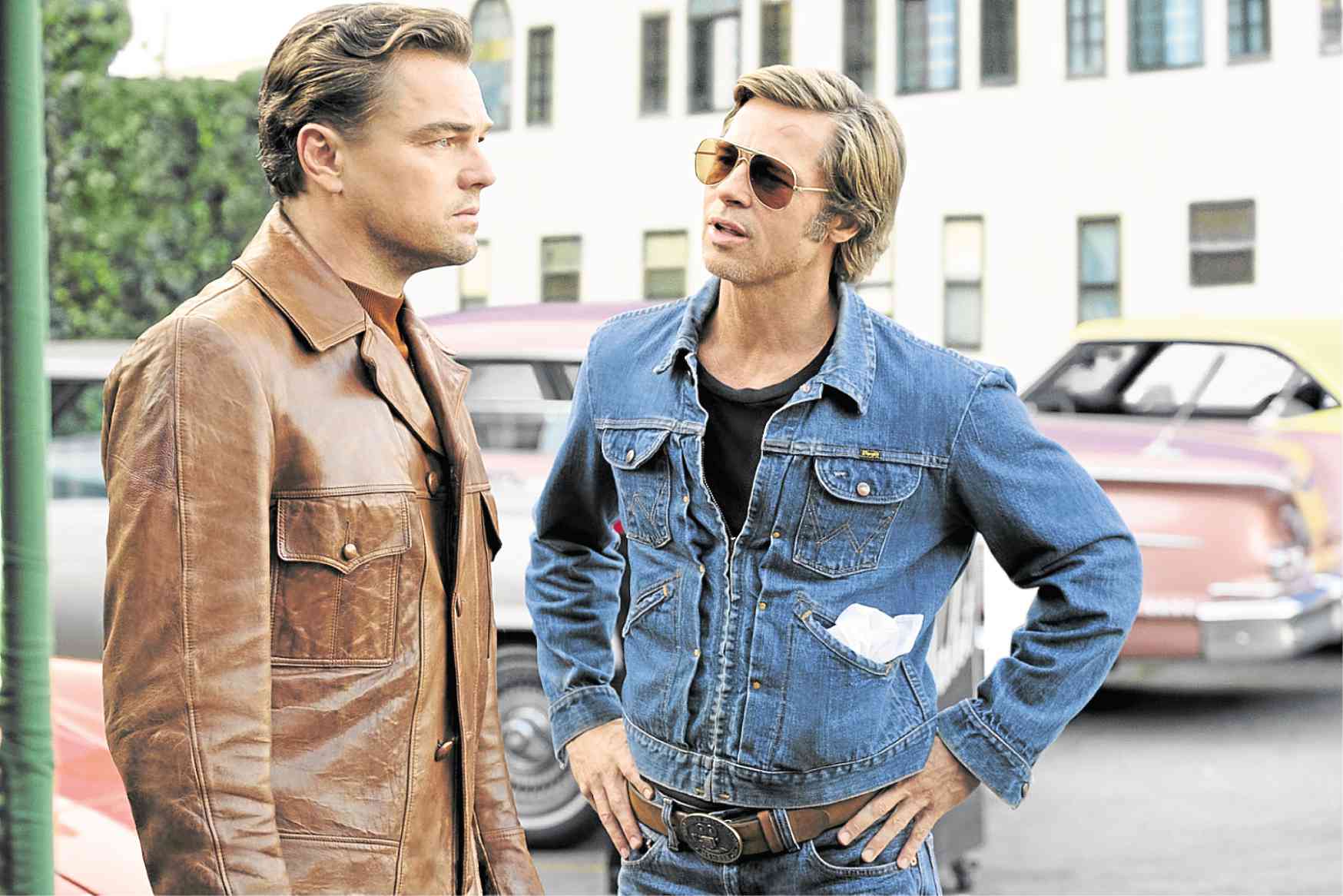 On making it in Hollywood and the proverbial casting couch, Brad answered, “When I first started out, I certainly met a couple of predatory people. When you’re vulnerable or haven’t worked, people are most susceptible. Especially moving out here from the Ozarks and not knowing what’s what. And someone says this is the way. I certainly ran into a couple of those people.”

Born in Shawnee, Oklahoma, Brad grew up in Missouri. The young man who loved films left Missouri, two weeks shy of finishing requirements for a college degree, and headed to Los Angeles.

He shared how he handled the casting couch matter as he took acting lessons and worked odd jobs. “I’m not comparing myself to any of the experiences that has been illustrated in the last couple of years, by any means,” he began. “I’m just saying that the vibe was there. At the same time, I just gravitated toward really good people and people who were smarter than me. It made the difference.

“I think it’s an important recalibration that’s been happening here in the last two years,” he said of the #MeToo movement sparked by sexual harassment charges. “That’s needed.”

Speaking about stuntmen like Cliff—Hollywood is teeming with men and women who do those physical routines, many harboring dreams of becoming stars, as well—Brad said, “I have great respect for stuntmen. I love stuntmen because they’re doing the hard stuff and I’m in my trailer (laughs). I’m the opposite of my friend, Tom [Cruise, who likes to do most of his stunts]. But, it’s just different these days.

“Back then, Steve McQueen and Bud Ekins (stuntman) were a historical combination. They were partners for an entire career. Bud Ekins comes up with the jump for ‘The Great Escape.’ The directors relied on him more.

“We rely on stunt coordinators who have their own team. It’s probably because things are more litigious these days, as well.”

Looking at guys seated back in the room, Brad added, “I got a couple of them sitting in the back right there that I’ve had for 30 years who fill in the downtimes and make them, not just survivable, but pleasurable. Those tight friends you don’t have to say anything to sometimes. And that was pretty much the Rick and Cliff camaraderie that Leo and I understand.”

Asked who are his close friends, or the Rick Daltons and Cliff Booths in his life, Brad replied, “I’m not going to name names. I have friends (he looks again in the back of the room) that I was very fortunate to meet when I was just beginning. It’s a group of friends. It’s not a single friend. It’s been the most valuable. It’s real love and a reciprocated kind of exchange.”

Reminded that his career began to rise in the late ’80s, Brad quipped with a hearty laugh, “We were like 1980s’ super models.”

“What the story’s really about is, where’s your worth?” Brad said about the fickle nature of fame, as Leo’s Rick is experiencing in “Once Upon…”

“From Margot to Leo, from Sharon, Rick, to Cliff, there is a complete human there,” he continued. “She represents hope and looking at the future. Rick is dealing with self-doubt and self-worth. He’s putting all his worth on what ends up there versus what he’s experiencing. And Cliff is more at a place of acceptance. He’s going to make the best of whatever he’s got and knows that he’ll figure it out.

“Maybe this is just me being older, but to me, that seems to be the game. Being human. Finding our worth. And too often we get caught up, and especially in our industry, it’s very misleading that way.

“Trying to define our worth by where things land, or what they represent. Which is an empty, shallow quest. That’s my take on it.”

In one scene, Mike Moh commands the screen in his cameo as Bruce Lee. Then, Mike’s Bruce and Brad’s Cliff start sparring. The martial arts legend and actor was shown vanquished by Cliff. There were some Twitter rants that it’s yet another “white male power fantasy.”

Brad expressed his admiration for the late Bruce. “I love Bruce Lee. He’s an icon from that time. I’ll tell you something about Mike Moh. It’s the quintessential Hollywood story. Mike was a struggling actor here (in Los Angeles), started a family, decided he couldn’t follow this thing anymore.

“He has to provide for his family, so he moved back to Wisconsin. Then he heard about this part. He submitted himself from across the States. And he got it, came back (to Los Angeles) and was able to do the part.” We’d say Mike’s cameo made us want to see him in more films.

As he continues his Hollywood journey in his mid-50s, Brad reflected, “My idea of fearless is going to climb Everest or bungee jumping. I’m not so much interested in that anymore. I see fearlessness as sometimes, speaking up or speaking out.”

In the meantime, the man from Missouri who made good appreciates that he gets to live under the iconic Hollywood sign. “I live in Hollywood so that’s gonna be my favorite place. I live near the (Hollywood) sign. I can see the sign. To me, Hollywood is this place where stories are told and sides of us are revealed. Stories that make us laugh. It’s a microscope into human nature. Then, there’s the old flashy side of things, but I’ve never been drawn to that.”