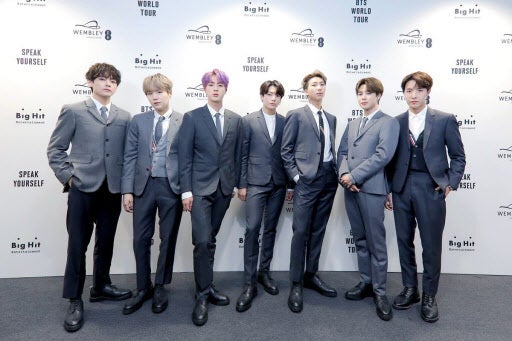 BTS. PHOTO from Yonhap via The Korea Herald/Asia News Network

SEOUL — K-pop superstars BTS has made it on Time magazine’s list of the 25 Most Influential People on the Internet for the third year in a row.

The K-pop septet was among the 25 people the US magazine unveiled Tuesday (US time) for this year, which included US President Donald Trump, American musicians Ariana Grande and Cardi B, and the British royal family, Prince Harry and his wife, Meghan Markle.

BTS was the only Korean on the list, on which the band marked its third annual presence since 2017, according to the band’s management agency Big Hit Entertainment.

“South Korean supergroup BTS are well on their way to becoming a household name — if they aren’t already — thanks to their millions-strong fanbase of digital natives, called “ARMY,” who avidly consume and promote their content online,” the magazine said.

“In 2019, having helped BTS top Billboard’s Social Artist chart for over two years, the ARMY propelled the group’s members — RM, J-Hope, Suga, Jung Kook, Jimin, Jin and V — to even greater success,” the magazine said, referring to BTS’ three Billboard No. 1 albums in a single year and other feats.

It is the fifth year the magazine has compiled the 25 Most Influential People on the Internet list, which is evaluated by looking at contenders’ global impact on social media and their overall ability to drive news. Yonhap