Funeral held for Beth Chapman of ‘Dog the Bounty Hunter’ 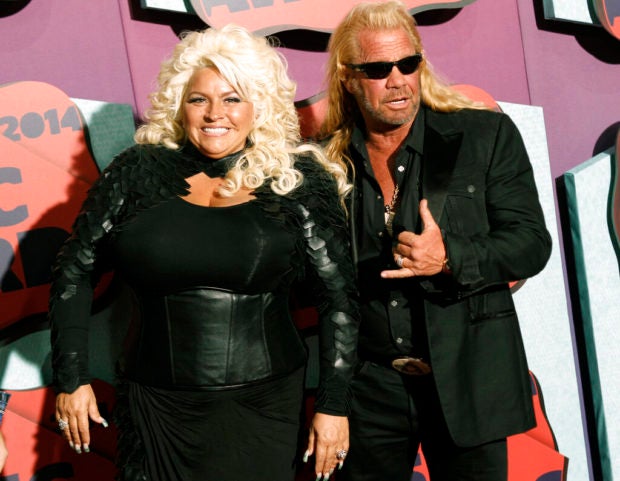 Funeral services for Beth Chapman, who starred with her husband Duane in the reality TV series “Dog the Bounty Hunter” will be livestreamed Saturday, July 13, 2019, from Colorado, her home state. Image: Wade Payne/Invision/AP, File)

AURORA, Colorado — Friends and family of the late “Dog the Bounty Hunter” reality TV show co-star Beth Chapman gathered in Colorado on Saturday where they remembered her as tough and irreverent, yet full of love even for some of the fugitives she helped apprehend.

Funeral services were held in Chapman’s home state after she died last month at the age of 51 in Hawaii, where she lived with her family. She had been battling cancer for about two years.

Chapman and her husband Duane “Dog” Chapman starred in the A&E show until it was canceled in 2012. The show followed the couple as they apprehended people who avoided arrest warrants.

They later starred in Country Music Television’s “Dog & Beth: On the Hunt.”

During Saturday’s services at the Heritage Christian Center, Duane Chapman recalled how he met his future wife when he posted her bond after she’d shoplifted a lemon.

The couple married in 2006. By then, Duane Chapman — the self-proclaimed world’s best bounty hunter — already had gained fame for nabbing serial rapist and Max Factor heir Andrew Luster in Mexico in 2003.

“I never admitted she was going to die,” he said Saturday. “She said ‘How are you going to make it without me?’ And I said, “I don’t know … She will never be dead to me.”

Duane Chapman recalled how his wife was prone to “chew people out real good. And I’m one of them. Because she always wanted people to know what happened if they go on her dark side.”

“She didn’t let anybody see that, and that’s simply because of the profession she was in,” Pollack said. NVG

Read Next
Advised by fans to rest, Kris Aquino still wants to work in MMFF horror movie despite being ‘underdog’
EDITORS' PICK
Acer starts the year off strong with the Aspire Vero National Geographic Edition
Critical scenario: 3 Comelec vacancies just 3 months before elections
PH logs 37,070 more COVID-19 cases; over 33K others recover
Over 3 Million worth of prizes to be won at Smart Padala’s SENDali Manalo Promo!
The best of bayside and city living at SMDC’s Sail Residences
‘Not yet the end’: Lawyer says Marcos Jr’s DQ cases to take lengthy process
MOST READ
Morissette Amon recovering after confinement for diverticulitis, tests positive for COVID-19
‘Not yet the end’: Lawyer says Marcos Jr’s DQ cases to traverse lengthy process
NBI foils escape attempt of Kerwin Espinosa, two others
Duterte asks: ‘Is COVID-19 airborne?’ Duque blames spread on ‘token compliance’ with rules
Don't miss out on the latest news and information.