What Daniel told Alden about Kathryn when he visited the set of ‘Hello, Love, Goodbye’ 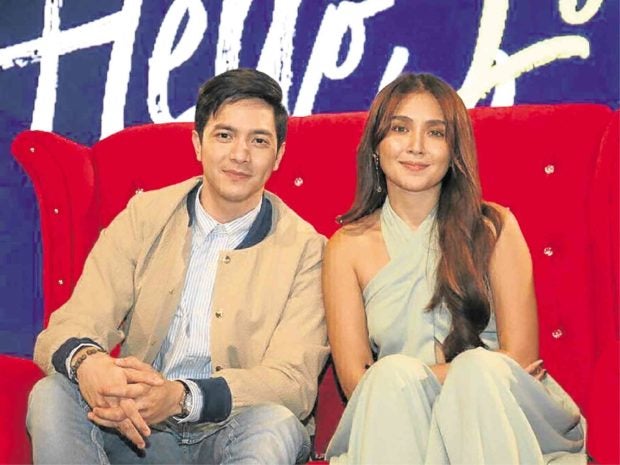 Do you know that Daniel Padilla went to see Alden Richards once during the filming of “Hello, Love, Goodbye,” which features the Kapuso star and Kapamilya’s Kathryn Bernardo in their first team-up?

“DJ (Daniel’s nickname) went to see me in my tent on our set here in Manila,” Alden disclosed.

“He congratulated me for the movie and thanked me for taking care of Kathryn,” he shared with reporters during the media gathering on Tuesday.

Alden observed that Daniel had been very supportive of the KathDen (Kathryn-Alden) tandem. In the film, which premieres in cinemas on July 30, Alden plays Ethan.

The GMA actor said he was also pleased to have discovered that he and Kathryn share the same passion toward acting. He recalled working with her in a particular scene for 10 straight hours.

“We were all feeling tired, but Kath had wanted to shoot more. I said, ‘Wow, that’s passion! That’s an actor wanting to give more!’”

The Kapuso star said Kath had inspired him to work harder. “I like it that we’re both in love with acting,” Alden pointed out.

Kathryn also gave credit to her boyfriend, Daniel, for his support for the project. “I also got a push from DJ. He told me, ‘Kaya mo ito,’” she said. The entire production spent a month in Hong Kong to shoot.

To motivate Kathryn, director Cathy Garcia-Molina barred other members of the cast and production team from talking to her. There were also days when she wasn’t allowed to use her cell phone, especially to communicate with Daniel in Manila.

“She cannot be happy, especially on days when we were supposed to shoot heavy drama scenes,” Cathy added.

Kathryn said the first week in Hong Kong was awfully difficult for her. “I would cry every night. There was even a point when I asked my mom to book me a flight back home because I felt too sad and lonely,” she recalled.

At night, Kathryn said she would talk to Daniel. “That helped me a lot; but he was also having a hard time sleeping because he was worried about me. We both agreed that I should carry on and just update him when I could.”

Days later, Cathy instructed Kathryn’s mom to confiscate her phone. “I wasn’t able to update DJ anymore. I really felt deprived and was so angry. It felt like torture,” Kathryn said.

Asked what made her soldier on despite the difficulties, Kathryn said it was the heart-to-heart talk she had with her director. “She told me, ‘This won’t work if you’re not willing to do it.’ Since then, I embraced the new challenge.”

She added: “It wasn’t easy. It wasn’t the method that I would’ve chosen had I been given the option, but I admit that I was able to give more of myself to the character because of it.”

Kathryn admitted that her character Joy is so different from her real-life personality.

“Kath has a fairly good life. ‘Di siya naghirap. She has been an actress since she was little. Her definition of pain and suffering is far from Joy’s experiences,” Cathy pointed out.

“You have to know the pain and suffering of an OFW (overseas Filipino worker). Until then, you cannot be Joy,” said Cathy, recalling what she told Kathryn.

Asked to confirm whether or not Kathryn and Alden would have kissing scenes in the movie, Cathy said: “It’s not the selling point of the film. The movie will stand on it’s own [even without the kissing scene].”

As for Alden, he claimed to have been a fan of Cathy’s work since he watched her romantic drama “One More Chance” released in 2007.

“I’ve seen a lot of her films. I’ve dreamed of acting in front of her camera,” Alden recalled, adding that he was 14 when he first stepped into the ABS-CBN grounds. “It was to audition for a reality show. Now that I’m doing a project with Star Cinema, I feel overwhelmed. I’m thankful to GMA 7 for the opportunity.”