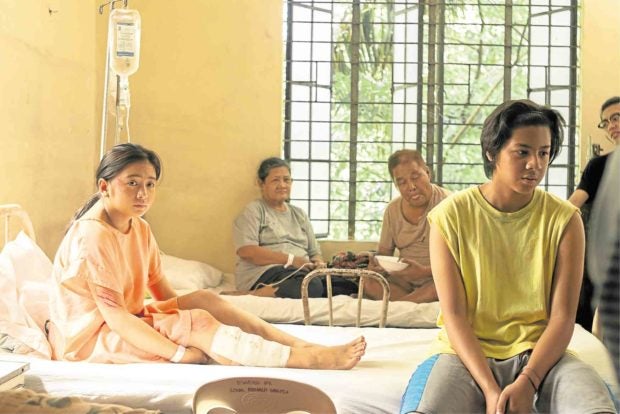 As a form of immersion, “Edward” lead actor Louise Abuel had to spend time with teenagers who are taking care of their ailing loved ones in public hospitals.

“We went to different hospitals. Louise surprised me because he asked a lot of questions to the other kids. He was really engaged,” director Thop Nazareno recalled. “We also went to different slum areas to observe. We even joined a drinking session of a group of teenagers to try to learn how they react to each other.”

“My impression of Louise was that he is sheltered and is really a good boy, but for his character, he needed to be someone who is maloko, pilyo and palaban. That’s why, at 15, I think this is really a coming-of-age experience for him,” Thop said.

Louise started acting at 7 in the family-oriented series “100 Days to Heaven.” He has been part of several Kapamilya TV series since then, the last of which was “Playhouse,” starring Zanjoe Marudo and Angelica Panganiban.

“We went through a lot of audition sessions before we found our Edward. This was because we were searching for a specific look—someone pitiful but still lovable no matter what he does. We wanted someone who is brave and reacts with no hesitations, especially since a teenager is expected to be angsty and pasaway,” said the director, who co-wrote the script with John Paul Bedia. Denise O’Hara also helped write the screenplay.

“More than talent, I was focused on chemistry. I got people I could work well with, not just the cast but the production’s entire team. When I saw Louise during the auditions, I knew that we would get along even after the project,” Thop added. “Now, he is like my kid brother. He calls me kuya. I forget that I’m his director, sometimes. I would even personally give him water to drink when I see that he’s already too tired.”

The development of “Edward” started in 2017, shortly after the release of Thop’s critically acclaimed “Kiko Boksingero,” which won three awards at the Cinemalaya fest, including best actor for lead star Noel Comia Jr.

Like “Kiko,” Thop said, “Edward” is another father-and-son story. “I don’t know why I enjoy making them. I have no father issues. I’m just fascinated with the relationship between the two,” he explained.

But unlike “Kiko,” Thop hoped that “Edward” would be able to make him “reach out to more people and show them the harsh realities of life, that there is injustice specifically in the public health care system in this country.”

“Edward,” which also features Ella Cruz, Dido dela Paz, Elijah Canlas and Manuel Chua, is an entry in the 2019 Cinemalaya Philippine Independent Film Festival that will run from Aug. 2 to 11 at the Cultural Center of the Philippines and in select cinemas nationwide.