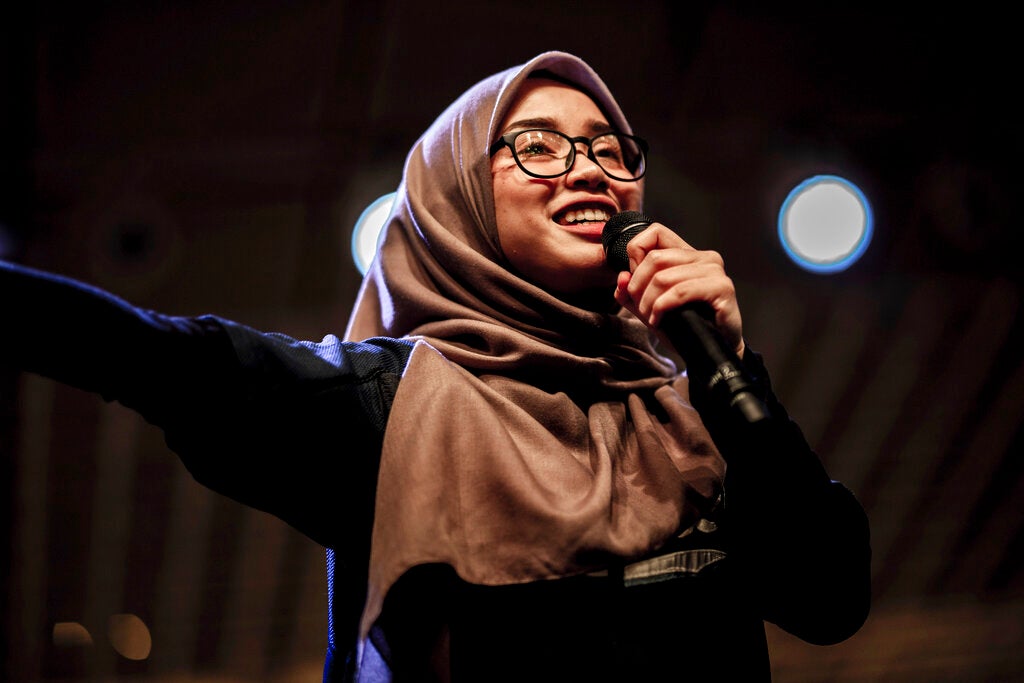 Bunga, whose real name is Noor Ayu Fatini Mohd Bakhari, is one of the only known rappers who wears a hijab and baju kurung, a traditional Malay dress, at her performances. Image: AP Photo/Wani Hamid

One of the few Malaysian female rappers, Bunga says she at first didn’t consider a career in music.

“My initial dream was to be a politician or a lawyer,” the 19-year old rapper told The Associated Press before her first performance in Singapore for the Malay arts festival “Pesta Raya” last weekend.

Her success has her changing her tune.

Bunga, whose real name is Noor Ayu Fatini Mohd Bakhari, is one of the only known rappers who wears a hijab and baju kurung, a traditional Malay dress, at her performances. Selfies on her Instagram account show her wearing various shades of hijab, but she didn’t start that way.

From Perak, the fourth-largest state in Malaysia, she became popular after a video of her performing in baju kurung in a local rap competition went viral in November. “When I reached the venue, I was wearing regular clothes,” Bunga said.

But even though she was the only female at the event, she did not stand out. “At the very last minute, I bought myself a baju kurung at the venue itself.”

Her popularity soared earlier this year when she was invited to rap at a cypher show “16 Baris” that takes place in a barbershop. The show features up-and-coming talents from around Southeast Asia.

Bunga raps about her own personal life, her experiences of being bullied, facing love, and working at a gadget shop. She also gives advice to girls through her rap. She steers clear of obscenity and racism. “(Being a female rapper) doesn’t mean I have to act like boys or talk about gangsters,” Bunga said.

But rapping in traditional garments comes with its own challenges. “We can’t jump around so much wearing baju kurung,” said Bunga. Another challenge is facing criticism. Bunga said she has been criticized for “bringing down the image of women” by rapping in a hijab.

Bunga said she is not deterred and she is “living proof” that women can make it in a male-dominated rap. “I’ve realized that there are more hijabis who want to rap. I think that’s a good thing because you shouldn’t worry about what others say.”