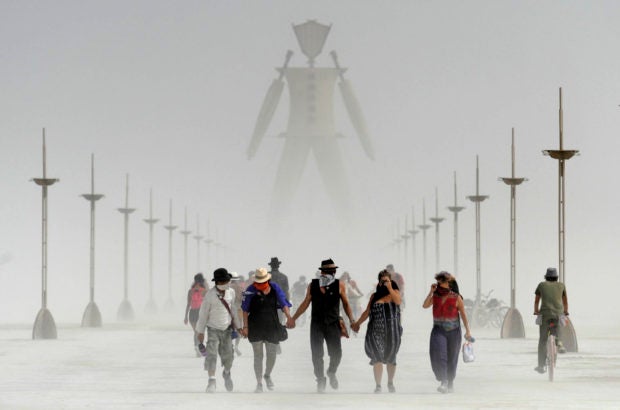 In this Aug. 29, 2014, file photo, Burning Man participants walk through dust at the annual Burning Man event on the Black Rock Desert of Gerlach, Nev. Burning Man organizers say they won’t challenge the U.S. Bureau of Land Management’s plans to cap their attendance at current levels under a new 10-year permit but they will fight any move toward federally-sanctioned screenings for weapons and drugs at the counterculture celebration. BLM proposed earlier this month that private security firm be hired to screen all vehicles and participants. Burning Man says it would subject “a peaceable gathering of people to searches without probable cause.” Image: The Reno Gazette-Journal/Andy Barron via AP.

Burning Man organizers say they won’t challenge the U.S. Bureau of Land Management’s plans to cap their attendance at current levels under a new 10-year permit but they will fight any move toward federally-sanctioned screenings for weapons and drugs at the counterculture celebration.

BLM proposed in a final environmental impact statement June 14 that a private security firm eventually be hired to screen all vehicles, participants, vendors, contractors, staff and volunteers upon entry to the temporary Black Rock City in the northern Nevada desert 100 miles (161 kilometers) north of Reno.

Burning Man organizers say that would subject “a peaceable gathering of people to searches without probable cause other than a desire to attend Burning Man.”

“This is one requirement we are prepared to push back on,” the group said on its website, adding that it would be a “massive shift from Burning Man’s 30-year history running our own operations.”

Group leaders assured fellow Burners in the post last week that screenings would not begin in 2019, and BLM officials said they did not foresee any major changes to its law enforcement routine this year.

“These procedures will be carried out in a manner similar to previous Burning Man events,” BLM spokesman Rudy Evenson told the Reno Gazette Journal. “At this time, BLM has no new announcements on changes to law enforcement and security policy or procedures related to Burning Man 2019.”

The EIS issued June 14 is subject to 30 days of public review before BLM can issue a formal record of decision.

Further information about the contracted security firm and the nature of the “screenings” is not currently available, Evenson said.

BLM officials have been careful to call the security measures screenings, which they insist are different from searches.

“Screening includes a broader range of methods. When you get on an airplane, everyone is screened, but only a few people have bags opened after the belt,” Evenson said.

The final environmental impact statement, which details the conditions of the event moving forward for the next decade, would cap annual attendance at the current 80,000.

Burning Man organizers, who had proposed a boost to 100,000, said in their recent post they didn’t have any immediate plans to grow when they proposed to expand the cap but had wanted to better understand the potential impacts of a bigger event.

“A possible population bump in the future is still on the table, but for 2019 we are satisfied to remain steady,” they said.

Burning Man organizers said they’d received assurances trash dumpsters won’t be required at the 2019 event, something they say undermines their pack-in-pack-out philosophy and fear would result in garbage piling up around the dumpsters.

“BLM has now indicated they will impose this mitigation in the future ONLY IF it is needed to address unresolved issues,” the group said. “But we must all do better… We’re simply not doing a good enough job disposing of our trash after we leave Black Rock City.” CC

How will these new changes affect Burning Man?