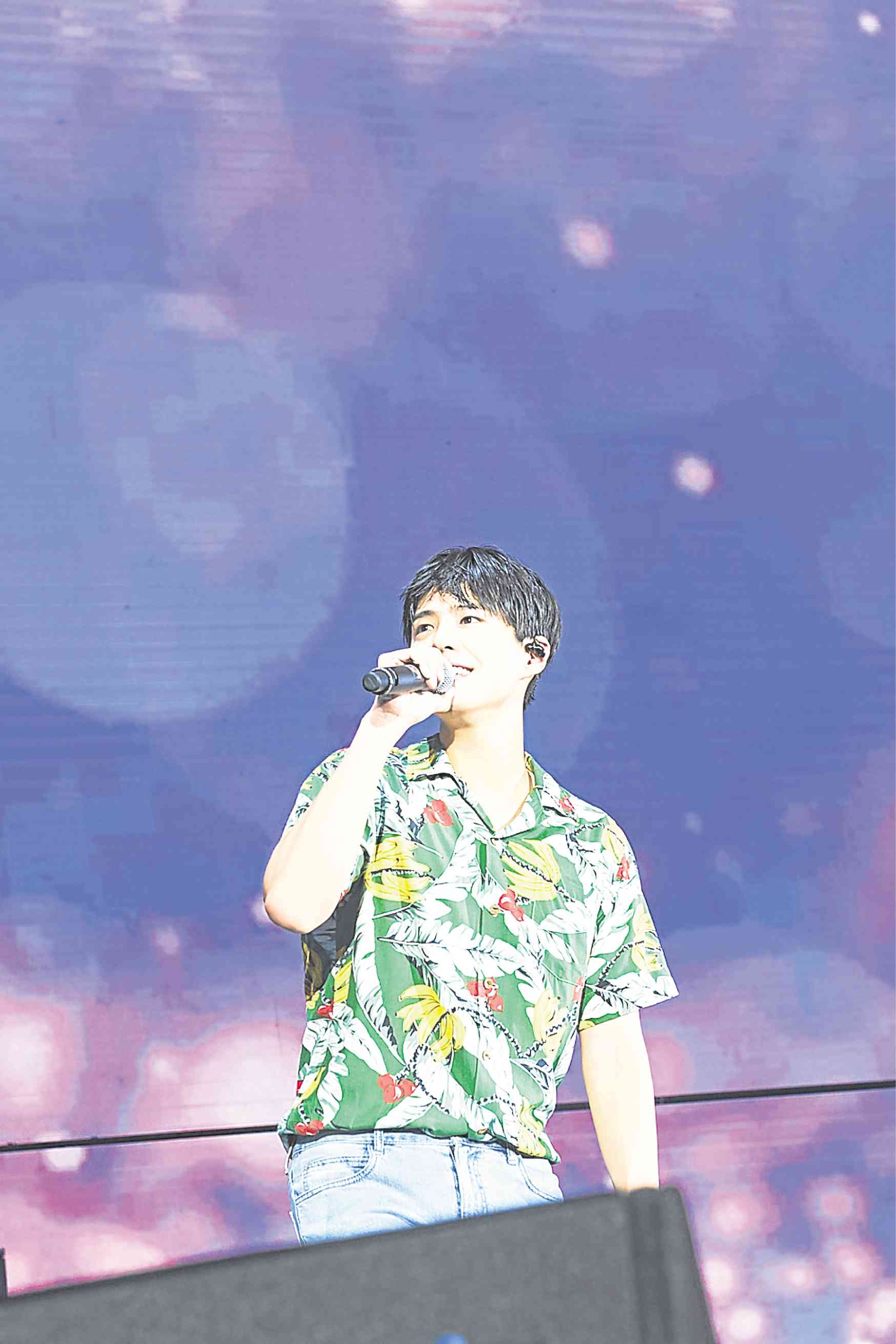 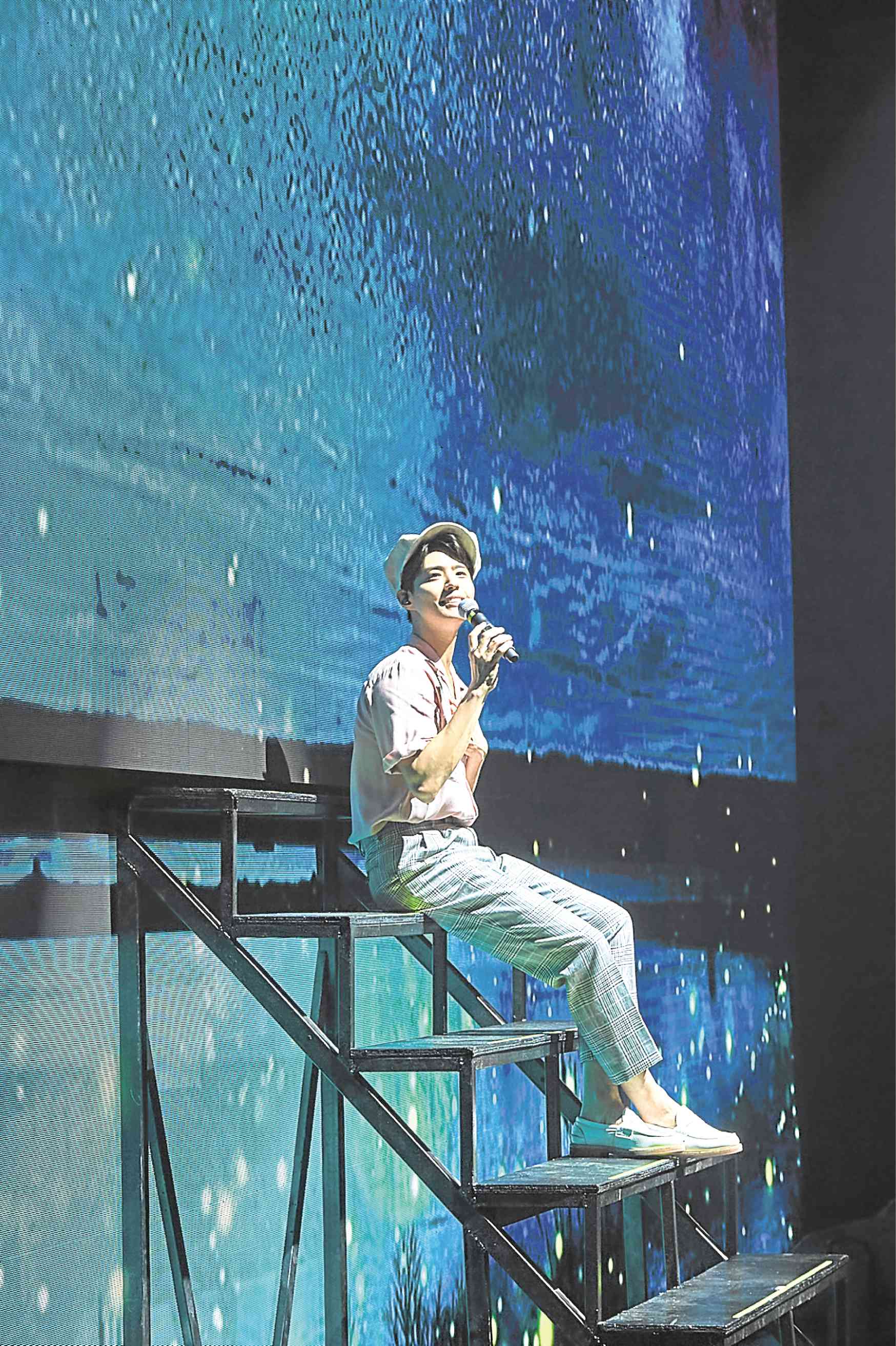 One drizzly Saturday, I found myself inside the SM Mall of Asia Arena, attending the so-called “fanmeet” of a wildly popular Korean actor whom I knew only through press releases and random Twitter clips; and whose drama series I had bookmarked on Netflix once upon a time, but never gotten around to watching.

It was the last stop of Park Bo-gum’s Asian tour titled “May Your Every Day Be a Good Day.” I wasn’t sure if I would indeed have a good one, but I was quite confident that, at the very least, it would be an interesting one. I have interviewed Korean celebrities—mostly K-pop stars—and attended a couple of concerts, but never a fanmeet.

And so, I went ahead. With me was a friend who had been bugging me to take her along in exchange of her services as an official guide: She vowed to provide me with live and on-demand backgrounders, trivia and everything. Park Bo-gum. Alright, then—deal.

While the majority of the fans were Filipinos, I did spot a number of foreigners—some of whom seemingly trooped to the venue straight from the airport. As I fell in line before my designated window to claim my tickets, not a few jet-setting fans rolled their bulky luggage past me to get theirs.

They were from Korea, China, Indonesia, the United States, etc. And I knew this for a fact, because my nosy self was—as my job requires, to my defense—eavesdropping as usual and managed to take a peek at their passports as they flashed them to the counter for verification purposes.

My friend told me that there are diehards who make it a point to follow Bo-gum and attend as many fanmeets as they could, even if it meant flying to other countries. Talk about dedication—and enviably deep pockets.

The queue going in wasn’t as bad as I had expected; we were in the arena in less than five minutes, and were promptly greeted by staff members giving away complimentary posters. So far, so good.

Upon arriving in our section, we saw that members of Bo-gum’s fan club had ever so neatly laid fanmeet essentials on each seat: a banner bearing the event’s title and a small electronic plastic candle, which came with a leaflet containing detailed instructions on when and which part of a specific song I should turn it on. Even better.

I was wolfing down a cheeseburger when the lights went out. For a fleeting moment, I was unsure whether to put my food down or chomp the remaining half in one go. The LED backdrop was hoisted up to reveal the man himself, Bo-gum, standing smack center, his back turned to the crowd.

He turned around, looking dashing in his blue suit and, at the same time, approachable with his 1990s boyband hair. And when he finally opened his mouth to sing Just Day6’s “I Like You,” bedlam erupted—screaming, flailing, jumping and still a lot more screaming. 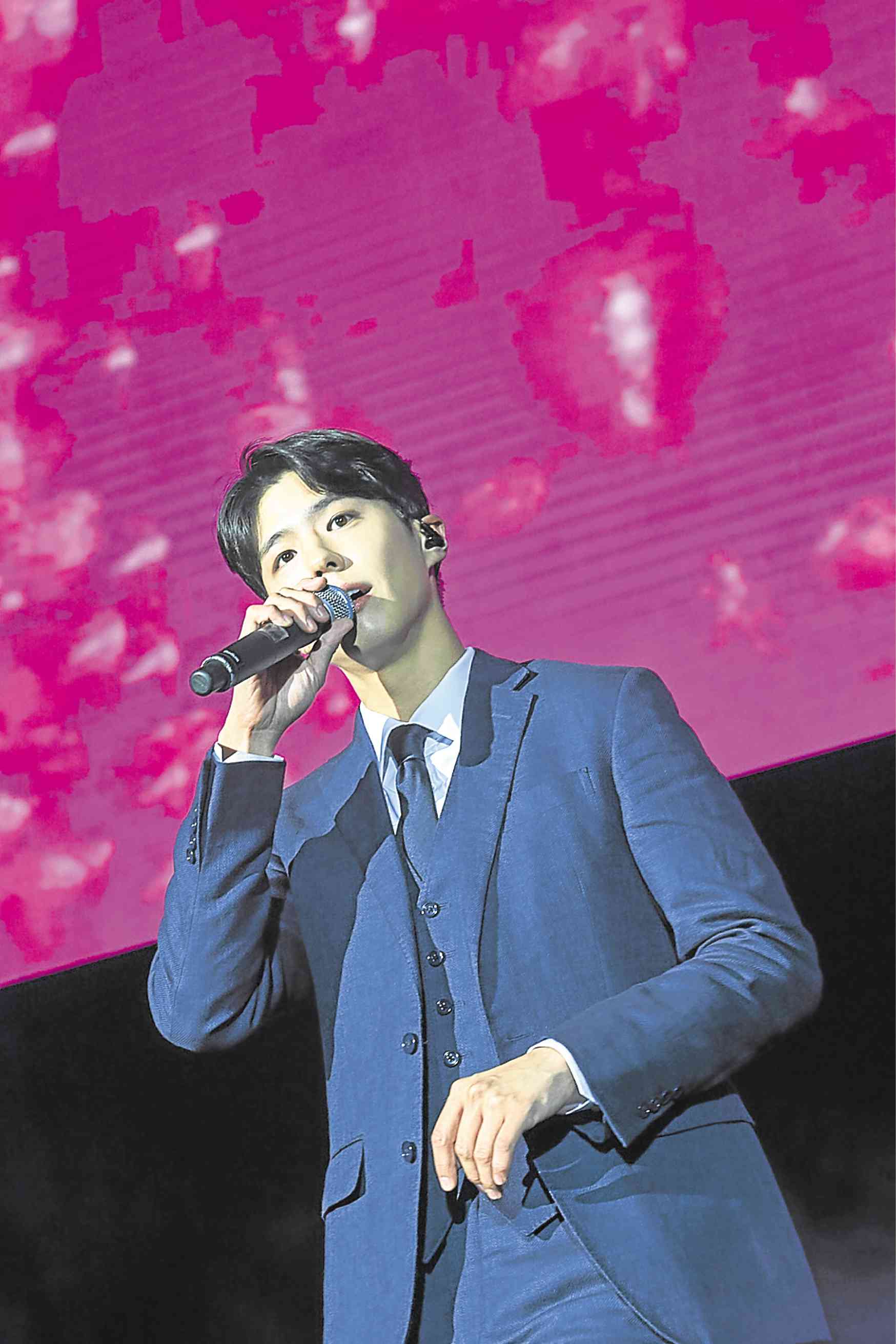 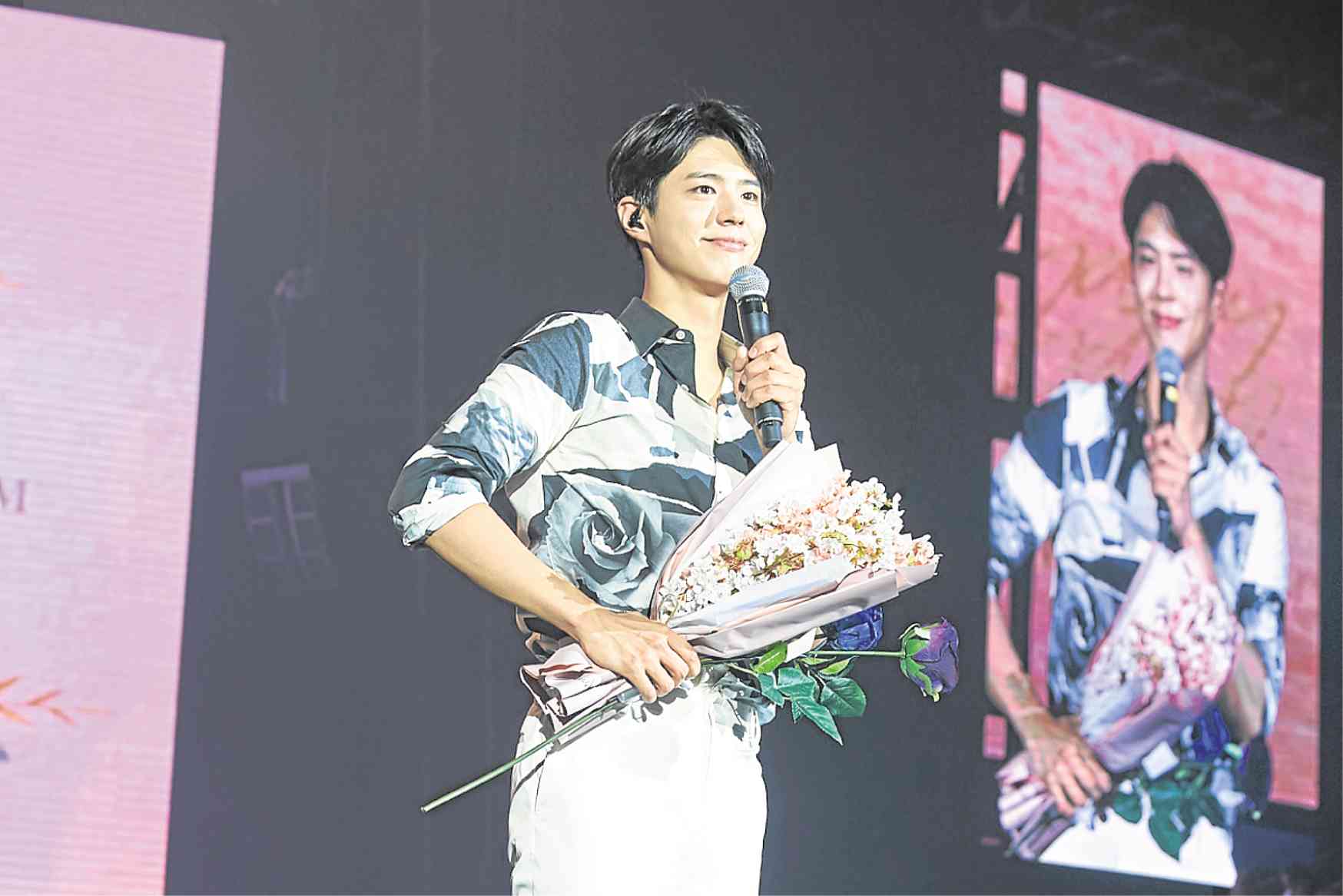 I knew Bo-gum has starred in such hit drama series as “Love in the Moonlight” and “Encounter,” but I had no idea he could sing. Not just can-hold-a-tune sing, mind you. He could actually play with his vocals—a little vibrato here, some nicely sustained notes there.

“Bo-gum took up musical theater,” my friend-guide, performing her sworn duty, swiftly pointed out. I browsed Bo-gum’s Wikipedia profile to check and, sure enough, learned that the 26-year-old star has even directed a one-act play in Myongji University, his alma mater.

The event’s host, Anne Curtis, who’s apparently a big fan of Bo-gum and K-dramas in general, joined the actor onstage. She asked him if there was anything he would love to do here in Manila. “Actually, I’m already doing it, having a good day with you, guys,” Bo-gum, who speaks decent English, said to deafening cheers. “This guy knows what he’s doing,” I thought.

And when he revealed that he wanted to get married and have kids before he turns 40, girls from different parts of the arena volunteered—or demanded, more like it—that he does it with them. “Marry me! Marry me!” Who could blame them, though? He did tell them earlier that he was their “boyfriend.”

From the brief chat, we learned that he wanted to study abroad and do an international movie; that he has been trying to compose songs and will star in an upcoming science-fiction movie called “Seo Bok,” where he will play a “human clone” alongside Gong Yoo, another Korean star. He doesn’t drink alcohol. And he does have bad habits he wanted to break, but he’s keeping that to himself.

As he fielded more questions and reacted to select scenes from “Encounter,” I started to get a better grasp of his popularity among fans. He has delicate, almost feminine, facial features—“pretty” may be the more accurate word than “handsome” to describe his looks. He also doesn’t have pores, which had me crying injustice on the inside.

He was polite and mild-mannered, with charming quirks that make you think you’re watching a 7-year-old child trapped in an adult man’s body—like the way he gently clapped using only his fingers, his little fist shakes when he got excited, and how he scurried around with arms outstretched, as if pretending to be an airplane.

Even his most mundane actions and slightest blunders elicited giddy reactions: A girl nearby couldn’t stop giggling after he dropped a banana charm he was trying to put on the “Manila”-inspired scent diffuser he was assembling onstage. He seemed like the type of guy that lolas love to love, if that makes sense.

Speaking of lolas, an adorable Korean ahjumma, or aunt, was one of the lucky crowd members who got drawn to reenact select K-drama scenes with Bo-gum onstage, proving that he appeals to people of any age.

Another lucky lady, meanwhile, got her photo taken with Bo-gum doing “V” signs behind her. And when he leaned his head closer to hers, the girl’s soul—for a split second—seemingly left her.

And that girl was everyone else, later on, when Bo-gum, who had changed into a newsboy ensemble, unexpectedly roamed the arena—including the lower boxes—to ensure that more fans could get a closer look at him while he sang “Let’s Go See the Stars.”

Aside from having lungs of steel, a fan, it turned out, must also have impeccable hand-eye coordination and cat-like reflexes, on the off chance he or she finds him or herself in close proximity with one of the 200 autographed balls being tossed to the crowd every which way.

Take it from the middle-aged woman before me, who dove onto the ground, tackled three other contenders and frantically fumbled under the seats, before emerging—triumphant and cackling uncontrollably—with her trophy of war.

After raffling off various trinkets and souvenirs—shirts he had sweated on, light sticks, posters, Polaroids, a boatload of calendars and other nice stuff I was deprived of—Bo-gum turned the event into a full-blown concert. He did ballads and upbeat ditties, all the while pulling off dorky poses and dance moves; he rapped and even sang a funky tune, which had him growling at
the end.

And then, he decided to really show off: Bo-gum performed “I Will Be Here,” popularized by Gary Valenciano, while playing the piano. (I got to finally use the candle here, by the way.) He also learned some Tagalog for an a cappella snippet of “Nasa ’Yo Na ang Lahat” by Daniel Padilla.

My friend had been surprisingly calm for the most part. But her composure went straight out the window when Bo-gum returned for his encore and danced all cutesy to Twice’s “What Is Love?” He likewise did Seventeen’s “Pretty U” and BTS’ “Boy with Luv”—the steps to which he learned from the band’s V (Tae-hyung) while they were in Busan. “But I’m not good at dancing yet.”

Bo-gum put on a show for three hours. That’s twice as long as most fanmeets, said my friend, who also attended that of [redacted] last year, which was more expensive, but felt tepid in comparison to this one. We were still not done, though, she added. There was still the “hi-touch” event. “Everyone gets a high five from Bo-gum,” she explained.

I couldn’t quite wrap my head around how a big star like him could willingly subject himself to physical contact with thousands of strangers. But Bo-gum did it, quite admirably, for another hour or so.

The lines snaked through narrow corridors leading to the exits. The air was filled with nervous chatter and laughter, fans rehearsing the Korean phrases they would tell him. We had no way of knowing if we were getting close to where he was stationed, besides the shrieking’s gradual increase in decibels.

Too bad cameras weren’t allowed or I could have recorded my friend trying to score more precious seconds of skin-to-skin contact with Bo-gum. I wiped the sweat off my palm before giving him a high-five. (Or was it Bo-gum who gave me a high five?) It was over in a blur, faster than I could say, “Annyeong.” Next thing we knew, we were being handed a signed envelope with a letter on our way.

So, did I have a good day? Let’s just say that I may finally get around to hitting that play button on “Love in the Moonlight.”

Read Next
John on Derek’s hesitation to take the plunge
EDITORS' PICK
Get exciting deals and discounts when you download the new McDonald’s App
Batangas execs, Taal evacuees thank House; hopeful on rehab efforts
SM continues to send relief assistance to remote towns in Batangas
PAL: Passengers with flights to parts of China may request for refund, rebooking
5 years after Mamasapano, son of fallen SAF 44 trooper remembers his ‘idol’
‘A greener, cleaner tomorrow’: A how-to guide for Filipinos who want to help with today’s energy crisis
MOST READ
Taal’s sulfur dioxide emission increases
No time for revelry; Tagaytay instead plans for alert level 5
Seized food items from China tested positive for ASF–BOC
Dina Bonnevie on Coney Reyes: We have forgiven each other
Don't miss out on the latest news and information.