‘Toy Story 4’ opens big but below expectations with $118M

The “Toy Story 4” opening, according to studio estimates Sunday, ranks as the fourth highest animated film opening ever, not accounting for inflation. 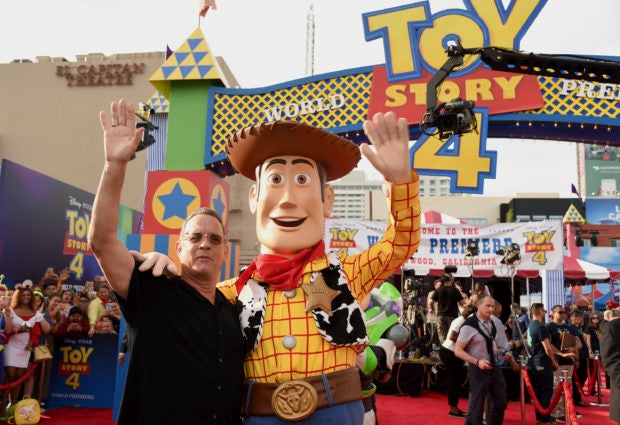 Tom Hanks, left, poses with his character Woody as he arrives at the world premiere of “Toy Story 4” on Tuesday, June 11, 2019, at the El Capitan in Los Angeles. (Photo by Chris Pizzello/Invision/AP)

But heading into the weekend, a $140-150 million opening had seemed assured for “Toy Story 4,” which played in 4,575 North American theaters.

The opening for “Toy Story 4” followed a string of disappointing sequels including “Dark Phoenix,” ”Godzilla: King of the Monsters” and “Men in Black: International.” But “Toy Story 4” had something those films didn’t: great reviews. It rates 98% fresh on Rotten Tomatoes. Audiences gave it an A CinemaScore.

The sequel, which introduces the child-made plaything Forky (voiced by Tony Hale) to the voice cast including Tom Hanks and Tim Allen, also grossed $120 million internationally, including a modest $13.4 million in China, the world’s second largest film market.

It was trounced there by the rerelease of Hayao Miyazaki’s 2001 animated classic “Spirited Away” from Studio Ghibli, the Japan animation studio that has often served as an inspiration to Pixar.

Cathleen Taff, distribution chief for Disney, said the company was thrilled with the opening and praised Pixar’s high standards.

“The Pixar team has always been disciplined about making sure they have a compelling story to tell, and that is especially true when it comes to sequels if you look at their past,” said Taff.

“Their process of sort of going through the rigor of making sure that this is a story people want told, the end result speaks for itself.”

Luc Besson’s assassin thriller “Anna” missed out on the top 10 entirely, opening with a mere $3.5 million in 2,114 theaters.

In a summer season that’s running 6.5% off the pace of last year, according to Comscore, many had positioned “Toy Story 4” as a surefire savior, due in part to the enviable track record of Disney and Pixar. (Disney’s “Aladdin” remake this weekend passed $800 million worldwide.)

Instead, the weekend was down 27.2% from the same frame last year. Overwhelming the industry’s market leader, Disney was thought immune to any sequel downturn.

But most other studios would love to have a film underperform to $118 million, with an expectation of long-term playability. Outside Sony’s upcoming “Spider-Man: Far From Home,” ”Toy Story 4″ has no family-friendly competition until Disney’s own “Lion King” remake opens July 19.

“The numbers being bandied about out there pre-weekend were certainly much higher than the number that it came in with,” said Paul Dergarabedian, senior media analyst for Comscore. “But if we bring it down to earth and put some perspective on this, it was still a franchise-high debut. It was a global opening of $238 million.”

But with underwhelming returns for even critically acclaimed comedies like “Booksmart” and seemingly surefire bets like “The Secret Life of Pets 2,” little has gone according to plan in Hollywood’s primetime season.

“The summer has been a real head-scratcher,” said Dergarabedian.