Stars put on tribute for late Karl Lagerfeld in Paris 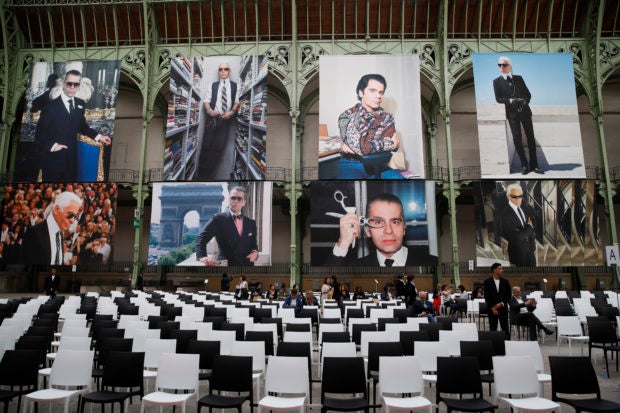 Portraits of Karl Lagerfeld, who died in February, lined the walls of Paris’ Grand Palais as VIP friends of the Chanel designer staged a final tribute to his iconic life Thursday.

Claudia Schiffer, who referred to Lagerfeld as her “mentor,” joined model Gigi Hadid, former French First Lady Carla Bruni and over 1,000 other mourners at the 90-minute memorial.

The German-born couturier may have spent much of his life in the public eye — his trademark white ponytail, high starched collar and dark glasses are instantly recognizable — but he remained a largely elusive figure.

So the tribute that featured intimate filmed moments with Lagerfeld, as well as personal interviews with the designer’s inner circle taped since his Feb. 19 death by Canadian opera director Robert Carsen, were all the more poignant.

Featuring live theatrical performances from Tilda Swinton and Helen Mirren as well as dance and classical music, the tribute was only slightly marred at the end after a song performed by Pharrell Williams suffered from audio glitches.

The presence of French First Lady Brigitte Macron, one of the last to be seated and dressed in black, was testament to the cultural status of the Chanel and Fendi designer who was not even French, yet dominated the Paris fashion industry for decades.

Lagerfeld was famed as much from his sharp and witty tongue, as for his designs.

“My greatest luxury is not to have to justify myself to anyone,” Mirren quoted Lagerfeld as saying, during a theatrical reading on stage with a violinist.

“With me there’s nothing below the surface. It’s quite a surface,” she added, again quoting the designer, prompting chuckles from crowds.

Interviews included Anna Wintour, the powerful US Vogue Editor, who opened the homages calling him “the original multitasker, a man who did everything at once.”

Lagerfeld was one of the most hardworking figures in the fashion world, joining luxury Italian fashion house Fendi in 1965 and later becoming its longtime womenswear design chief in 1977, as well as leading designs at Paris’ family-owned power-house Chanel since 1983. Lagerfeld was, until his death, simultaneously the creative head of two major global fashion brands and his eponymous brand, as well as an acclaimed photographer, stylist and filmmaker.

Revealed in the recorded material was also a rare interview with his successor, Virginie Viard, which hinted that the future direction for the multibillion-dollar fashion powerhouse might be closely aligned to Lagerfeld’s vision.

“Together we worked to create most beautiful possible collections, and today I’m trying to continue so that everything is perfect for him,” said Viard. CC

‘What a talent’: Celebrities react to death of Karl Lagerfeld

‘Unconventional biography’ of Karl Lagerfeld to be released by HarperCollins