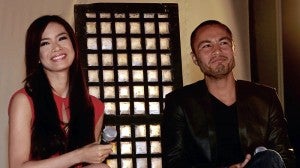 Actor Derek Ramsay, who is reportedly being wooed to transfer to TV5, said he was “open to career changes,” now that his contract with ABS-CBN has expired.

But the actor said he was still waiting for a renewal offer from his home network before making a decision. He said he met recently with Kapamilya executives Gabby Lopez, Charo Santos-Concio, Cory Vidanes and Malou Santos. “They told me to make a wish list, but I’m not the type to make demands. I’d rather the offer came from them. I want to know what their plans are. They’re like family to me,” Derek told the Inquirer during the press conference for his latest movie, “Corazon: Ang Unang Aswang.”

Derek added: “It was nice of them to ask to meet my dad. The first thing laid on the table was that, this wasn’t about money. I guess I have proven that with the number of years I have been with ABS-CBN.”

He cited an offer from another network that he turned down two years ago. “I didn’t even ask ABS-CBN to make a counteroffer. I love this network. Although there has been a few disappointments, the network has done a lot for me. That’s what my family is taking into consideration in figuring out what is best for me, because I am not getting any younger.”

Is moving to another channel an option? “I have always been open to career changes,” Derek replied. “But there is no firm proposal from TV5.”

Derek explained that the rumored transfer could be the result of his being vocal about wanting to get involved with the reality program, “Amazing Race,” which TV5 is airing soon. “I wanted to be in it,” he said, “not as host, but as a contestant.”

He denied talk that his parents recently met with TV5 chair Manny Pangilinan in Hong Kong. That was pure assumption, he stressed. “My dad does a lot of work for Channel 5, Smart and PLDT—in security and electronics.”

Neither did TV5 ask his dad to coproduce all of the actor’s programs, should he transfer. “That rumor offended my family,” said Derek. “My father built his business honestly. He’s too proud to engage in such ex-deals.”

Derek said a multinational company offered to buy his father’s business, but that the elder Ramsay declined. “We had a big family meeting over it. I said, ‘Dad, do what you want. Your responsibility as my parent is finished. Enjoy your life.’ I’d really love for my dad to just play golf every day and for my mom to tend her garden. But they choose to drive every day from Tagaytay, where they live, to look after their 300 employees.”

Derek said his father initially tried to convince him to run the business, but that the discussion ended up in a big fight. “I definitely don’t see myself doing that. When I graduated college, he made me help, but it didn’t work. That’s the reason I ran away from home,” he recounted. “But things have changed. My dad just showed his support for what I do by meeting with my bosses.”

One thing he had mixed feelings about, Derek admitted, was settling down at this point with longtime girlfriend, actress Angelica Panganiban. He elaborated: “Angel is ready, but she’s at the peak of her career. I guess we’ll know in a year or two. She has a lot of projects lined up this year. I’m ready, too—I don’t think there’s a ‘right’ age for it—we’ll just have to wait and see.”

He denied that Angel and his “Corazon” costar Erich Gonzalez had a rift last year, while filming was ongoing. Angel reportedly got jealous when Derek introduced Erich to his mom, Remedios. “My mom asked if she could meet Erich—mom’s a fan—so I set it up,” Derek said. “I would have known if Angel and Erich had fought because Angel and I talk about everything. She even visited us on the set twice.”