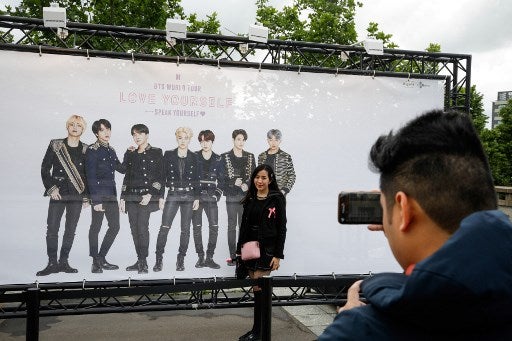 A fan poses for a photograph outside the Stade-de-France stadium in Saint-Denis, on the outskirts of Paris, on June 7, 2019, prior to a concert of the South Korean K-pop boy band BTS. AFP

PARIS, France — Paris’s Stade de France stadium is packed. The crowd is a sea of screaming teenagers in sporty hoodies, colorful rabbit ears and — as it starts to rain — plastic ponchos.

In a puff of smoke, BTS bursts onto the stage from behind two giant inflatable leopards. Dressed in white suits, they jump around to pumping hit “Dionysus”, to the delight of fans clutching smartphones and flashing globe balls.

It’s a suitably dramatic entrance for the seven-piece South Korean boy band, whose world tour, “Love Yourself: Speak Yourself” came to Paris for two nights late last week, after a string of sold-out shows in Los Angeles, Chicago and London’s iconic Wembley Stadium.

While the music industry has seen its fair share of boy bands over the years, from The Jackson 5 to One Direction, BTS — short for Bangtan Sonyeondan, which translates as Bulletproof Boy Scouts — is the first K-pop group to top charts in the US and Britain.

“BTS has captivated pop fans in the West in a way that no other Asian band has ever done before,” Ben Beaumont-Thomas, music editor of Britain’s The Guardian newspaper, told AFP.

“Access (to international music) is so instantaneous and the squeamishness around non-English lyrics is starting to erode.”

The band’s success has been credited with a boom in South Korean consumer exports, such as clothes, cosmetics and foodstuffs, as well as a hike in visitor numbers to the country.

The group’s close relationship with fans, flooding social media with selfies, videos and tweets in Korean and English, has helped to spawn a global following of millions of fans the songsters call their “army”.

The band sings predominantly in Korean, but that doesn’t stop fans singing along — songs are peppered with phrases in English and their YouTube videos have translations.

“Their music brings joy to our daily lives. I like the messages they communicate in their songs — they sing about everything from depression to family and bullying,” said Philae, a French 22-year-old car industry worker at one of the Paris shows who declined to give her full name.

In Paris, the Korean septet sang and danced their way through 22 tracks, showing off their meticulous choreography in pop anthems like “Not Today”, before one of the members, J-Hope, took the spotlight with his aggressive rapping in Korean to “Trivia: Just Dance”.

Another of the band’s members, Jimin, one of the youngest, serenaded the crowd with R&B ballad, “Serendipity”, with the faintest smile or flick of his hair eliciting squeals of delight from adoring fans.

Their hit single “Boy With Luv” broke the YouTube record for the most views in 24 hours, with 74.6 million hits when it was released in April.

Beaumont-Thomas linked the group’s appeal in the West to streaming apps like Spotify and Deezer, which allow music fans to discover performers from around the globe.

“Young people today, especially through social media and streaming, feel like they’re part of a global culture,” he said.

“BTS already have a massive fan base in Asia, so fans (in the West) feel like they’re part of something. There’s a real sense of identity.”

South Korean performers like Blackpink and Psy, whose hit “Gangnam Style” in 2012 became the first video to top a billion views on YouTube, have already broken into Western markets in recent years.

BTS’ popularity does not seem to have been affected by recent sex scandals involving some of the South Korean K-pop industry’s other stars.

High-profile cases have included singer Seungri from popular boy band BIGBANG, who is accused of arranging sex services for potential investors and rich clients at a nightclub he co-owns. He denies the allegations.

And singer-songwriter Jung Joon-young has admitted to filming himself having sex and sharing the footage without his partners’ consent.

While their onstage personas seem almost cartoonlike at times — during one set in Paris they wandered around an inflatable obstacle course holding glittery pink microphones — their songs about self-acceptance have struck a chord with teens.

In September, the band’s lead singer RM made a speech to the United Nations in New York about how music allowed him to overcome worries about “what other people thought of me”, and start to “love myself, little by little.”

The floppy-haired musicians, whose ages range from 21 to 26 and who often sport earrings and lipstick, appeal to a generation that feels comfortable with the idea of fluid gender identity, said Samantha Lifson, writer at Seoul-based pop culture magazine, K-Soul.

“In some of their earlier work, they had a sexier image, but they went from that portrayal of strong masculinity to a softer look,” she told AFP, adding: “I definitely think younger music listeners are looking for that kind of comfort.”

Baran Masifi, 24, who travelled from Germany to see the band perform in Paris, said she found their music “really catchy, but it has a lot of meaning, too. They talk about real life — things like mental health and school.”

Lucie, 13, from Nancy in northeast France, who attended one of the Paris concerts with her father, said: “They encourage people to love themselves.” /ee