ALJUR open to a cougar’s bite.

Handsome Hunk is a notorious playboy. Many thought he had straightened up since shacking up with Gorgeous Starlet. But he tried to cheat on clueless GS during an out-of-town gig.

Turning on the charm machine, HH asked a giddy fan out on a date. He was unsuccessful, though. The poor barrio lass was shocked and backed out in a huff. Maybe the fan was scared of GS, who’s as famous for her fiery temper as for her delicate beauty.

Beautiful Starlet has a huge problem. Apart from getting entangled in a career-shattering scandal, BS has to contend with another headache-inducing intrigue.

According to scattered reports, a multinational company has decided to drop BS as endorser. Plus, the firm may be about to file a case against BS for violating her contract’s morality clause.

Perhaps Senior Host is just trying to emulate Meryl Streep in “The Devil Wears Prada”—except this celeb’s taste leans toward tacky. SH, according to a mole, is a boss from hell.

Underlings are not permitted to smoke near her. They are not even allowed to move around on the set because SH gets distracted easily. Whenever she fumbles lines on-cam, the nicotine-deprived subordinates shake in fear.

Seems possession of a potty mouth runs in the family. 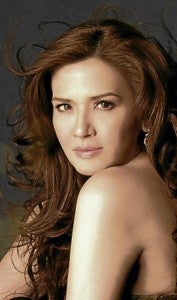 Hunky Actor looks gentlemanly and soft-spoken onscreen; turns out, he has a nasty temper, too. He sent an expletive-laden text message to a known enemy of his family.

HA’s bosses were stunned when they read the incendiary SMS. They swiftly admonished HA and warned him against doing it again.

Handsome Hunk has a secret. He was forced to own up to a supposed relationship with Troubled Actress, to conceal his true gender preference.

However, HH really prefers the company of men. Former Girlfriend says so. HH plunged into an affair with TA to dispel the idle chatter.

Young Hunk likes to jest that he has a budding bromance with fellow Teen Star. He often hugs and kisses TS in public, jokingly.

Unknown to both, a malicious paparazzo had taken a snapshot of them fooling around.

The incriminating cell phone pictures were immediately posted on a gay website.

Top of the the Talk Shows

GERALD Anderson: “I wish it were true.”

Gerald Anderson, asked if he and Sarah Geronimo are in a relationship: “As much as gusto kong sabihin na yes, we’re taking things slow. Pero naniniwala ako na slowly, but surely.” (Slow and steady could win the race.)

Piolo Pascual, asked what he would sacrifice for love: “Siguro pagdating ng panahon kaya kong i-give up lahat para sa pag-ibig.” (Can’t have it all, huh?)

KYLIE Padilla: No time for Aljur?

Zsa Zsa on defending herself against Twitter bashers wanting her out of ASAP: “Masakit, eh! Tao lang kami. Nakakaramdam kami ng sakit.” (Ah, the anonymity that Twitter guarantees … Everyone’s a critic. Or an a-hole.)

Grace Lee on meeting Kris Aquino: “We were introduced over dinner. Mabait siya and very interesting. She’s such a wonderful person. She’s so fun to talk to. Parang ’di  kami naubusan ng kwento… I didn’t expect her to be so candid with me.” (Honey, she’s candid with the entire country.)

LJ Reyes, asked if she’ll show her Playboy cover to her one-year-old son when he grows up: “Actually nakita niya na! Sabi niya, “Mommy!” (His friends will say the exact same thing 15 years from now.)

Charice on people criticizing her new look: “I don’t care. This is me, this is what I want, and I love it.” (Bravo! Nagpapakatotoo ka lang naman! ’Di tulad ng iba diyan…)

Rhian Ramos on when she feels the happiest: “Kapag nagtatrabaho ako. Feeling ko ’yun ang element ko.” (Stay away from men for a while, girl.)