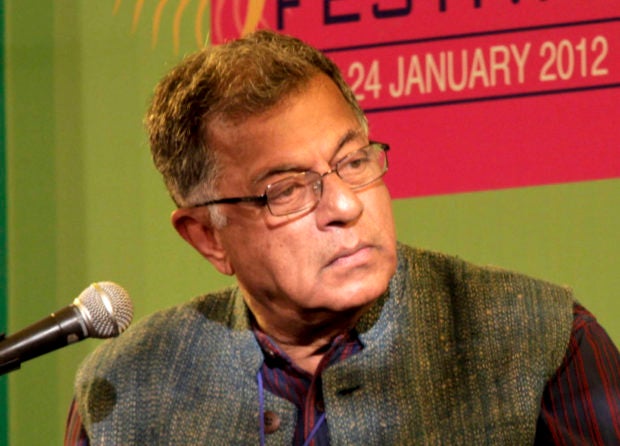 A Jan. 20, 2012 file photo of Indian actor and playwright Girish Karnad, attending the Jaipur Literature Festival in Jaipur, India. Karnad, a top Indian playwright, actor, director and a rights activist, died on Monday after a prolonged illness. He was 81. Image: AP/ Manish Swarup

Girish Karnad, a top Indian playwright, actor and director and a rights activist, died Monday after a prolonged illness. He was 81.

India’s president and the prime minister expressed their condolences over Karnad’s death at his home in Bangalore, the capital of southern Karnataka state. The family did not elaborate on his illness.

A renowned theater personality, Karnad worked predominantly in South Indian cinema and in Bollywood. He was a Rhodes scholar in the 1960s and earned a master of arts degree in philosophy, political science and economics, the Press Trust of India news agency said.

Prime Minister Narendra Modi said Karnad will be remembered for his versatile acting across all mediums.

Karnad received India’s top literary prize, the Jnanpith Award, and two national awards, the Padma Shri in 1974 and Padma Bhushan in 1992, for his body of work. His plays, written in the Kannada language, were translated into English and several Indian languages.

Karnad made his acting as well as screenwriting debut in 1970 in the Kannada film “Samskara”. The movie won the Indian president’s Golden Lotus Award for Kannada cinema.

He was popular on television as well, especially for playing a role in “Malgudi Days”. He also hosted a science magazine, “Turning Point”, on state-run television in the early 1990s.

He made his directorial debut with “Vamsha Vriksha”, a Kannada-language movie that won a National Film Award for best direction along with B.V. Karanth, who co-directed the film. Karnad directed nearly a dozen movies in the Kannada and Hindi languages.

He championed freedom of expression and condemned violent attacks on journalists or critics of religious superstition and extreme Hindu nationalist politics.

Karnad was one of 200 writers who appealed to people to “vote out hate politics” in April-May national elections.

In 1992, he condemned the demolition of the Babri mosque by Hindu radicals in the northern town of Ayodhya that triggered the worst communal rioting in India in decades.

Karnad is survived by his widow, one son and one daughter. CC

‘Big’, ‘A League of Their Own’ director Penny Marshall dies at 75

Read Next
Women underrepresented in top animation jobs — study
EDITORS' PICK
EuroMillions Superdraw: A lottery draw unlike any other is coming to the Philippines
‘Justice will be done,’ Duterte assures as he vowed probe on Jolo incident to bare ‘truth’
Water remains our saving grace right now
Smart releases Hyun Bin’s second TVC
Current dominant strain of COVID-19 more infectious than original—study
DOLE: Return of OFWs’ remains from Saudi to be ‘delayed,’ deadline moved to ‘early next week’
MOST READ
Locsin warns of ‘severest response’ if China’s army drills in SCS ‘spill over’ to PH domain
Duterte tells military: No other president looked at you the way I did
BREAKING: Duterte signs anti-terror bill into law
Go apologizes for 5-on-5 game; PBA summons Japeth, ROS rookie
Don't miss out on the latest news and information.