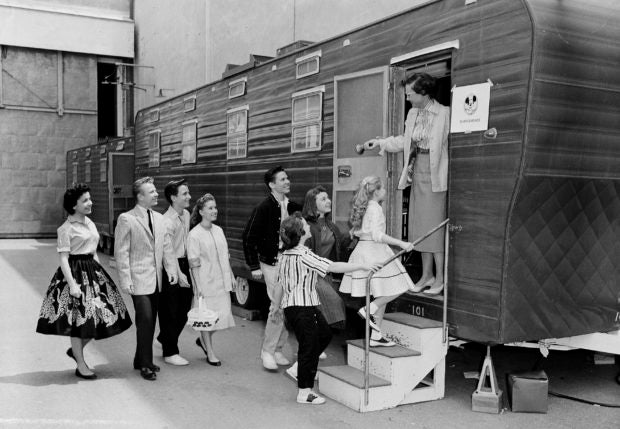 In this Aug 20, 1957, file photo, Walt Disney’s Mouseketeers enter a large trailer that serves as their school on the Disney lot in Hollywood, Calif. Greeting them is their teacher Jean Seaman of the Los Angeles Public School System. Jimmy Dodd, red-haired and fortyish, is master of Mouseketeer ceremonies. Mouseketeer Annette Funicello can be seen at far left. Police have confirmed that a body found in April 2019 at an Oregon home is that of missing man Dennis Day, who was an original member of Disney’s “The Mickey Mouse Club”. Image: AP/Ernest K. Bennett

Police have confirmed that a body found in April at an Oregon home is that of missing man Dennis Day, who was an original member of Disney’s “The Mickey Mouse Club”.

The Oregon State Medical Examiner’s office identified the body, although they were unable to use dental records or DNA because of the condition of the remains, Oregon State Police said Thursday. Police are still investigating Day’s death.

He was reported missing in July by his husband, Ernie Caswell, who suffers from memory loss and was in the hospital when he made the report.

Day’s car on July 26 was found at the Oregon coast. A missing person report said Day had “uncharacteristically” left his dog with a friend on the day he disappeared.

In February, members of Day’s family spoke with television news show “Dateline”, saying the investigation into Day’s disappearance had been poorly handled.

Day’s body was found in his Phoenix, Oregon, home in early April.

Friends and relatives had set up the Help Us Find Dennis Day Facebook page. In a Thursday post, Day’s niece Janel Showers of Clovis, California, thanked the Facebook group for their “love and support” as well as Oregon police investigators for their efforts.

“Our family is truly thankful to the Oregon State Police for helping to bring closure to our family so that we can finally lay Dennis to rest,” Showers said.

Day was born in 1942. After moving to California, he began performing at age 6. When he was 10, he was among the first group of children hired for the Disney show.

Day and Caswell moved to Oregon in the 1980s. CC