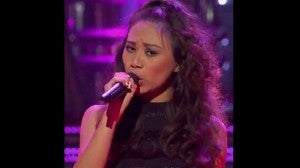 Another Filipina is gunning for the “American Idol” title. Jessica Sanchez’s powerful vocals had Filipino Americans and the judges gushing and raving about the resurrection of Whitney Houston.

“Jessica, you blew us away and made us all speechless for the win,” Aimee Pabilona, a physical therapy aide from Manhattan, posted on Facebook.

When the 16-year-old finalist performed the Houston masterpiece, “I Will Always Love You,” the judges were so moved they gave the Filipino-Mexican teen a standing ovation.

“BTW, her dad is Mexican-American, so both communities are rapidly voting now,” said Ernabel Demillo, a journalism professor.

Millions watched the show, and while contestants shine on their performance with the judges’ approval, it’s the viewers votes that ultimately decide the winner. Former Idol third place finalist Jasmine Trias from Hawaii credited her successful run in the competition from millions of Filipino Americans who texted their votes during season three.

Myrna Bustamante, a health insurance broker from New Jersey campaigned for Jessica “Let us give her our full support by voting for her.”

Jessica started singing at 2. Her profile says that with her ear for music, she basically taught herself to sing. Her influences include Celine Dion, Mariah Carey, Beyonce, Christina Aguilera and Whitney Houston.

Before Jessica, (who lives in San Diego with mom Editha and dad Gilbert) advanced to the Top 13 round, she went through a series of auditions from solo to group performances in Hollywood, Las Vegas and finally in Los Angeles.

For more of Jessica’s “exceptional timing and perfect pitch,” tune in to Idol Wed/Thurs 8/7 Central and vote for Jessica Sanchez at 1 (866) Idols—12.