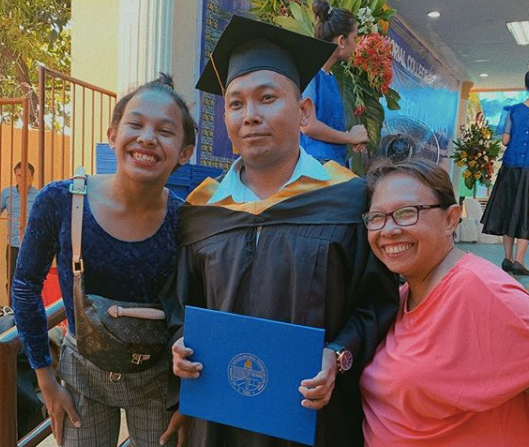 While most parents dream of sending their children to school, it was child actor and “Your Face Sounds Familiar Kids” grand winner Awra Briguela who helped his father Oneal Brian finish college.

Briguela, who is currently in high school, was recently praised by TV host Boy Abunda for his inspirational story on “Tonight with Boy Abunda” on May 30.

(We often hear of stories about parents doing everything they can to send their children to school. Your story is truly inspiring because you played a role in your father’s finishing college. The feeling must be so wonderful.)

Briguela agreed and likened the feeling to the satisfaction of being able to buy things with one’s own hard-earned money.

(Of course. Doesn’t it feel good to buy things that you worked hard for? It feels good, too, to be able to see your father finish college because of you.)

Briguela marked the special occasion of his father last April 12, a moment he shared to his fans on social media. In the photo, his father Oneal can be seen wearing his toga and cap and proudly holding up his diploma, while Briguela stood next to him. As per Briguela, his father finished with a degree in business management.

“Sabi nga nila ‘it’s better than late, than never,’” he wrote then. “Kaming lahat nang anak mo sobrang saludo sayo! Kase pinakita mo samen kung gaano kahalaga ang pag aaral (As people say, ‘It’s better late than never.’ All of your children salute you because you showed us just how important to have an education)!”

Briguela also shared to Abunda that he is currently in a regular school after being homeschooled.

(When I entered Grade 9, I realized I can still go to school despite having many projects, so I tried to go to a regular school. When you’re homeschooled, you’re alone and on your own, but in a regular school, you have classmates.)

Apart from acting and schooling, Briguela is also a member of his school’s volleyball varsity team.  /ra

No right age to come out of closet