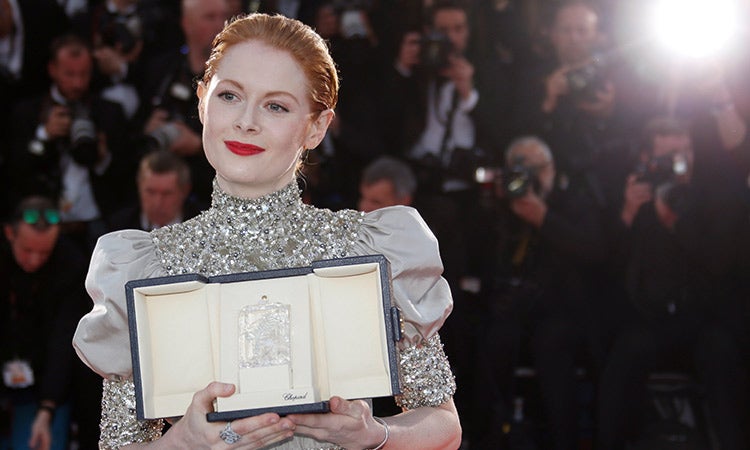 Emily Beecham poses with her trophy after she won the Best Actress Prize for her part in “Little Joe”. Image: AFP/Alberto Pizzoli

Great Britain’s Emily Beecham has been catapulted into the movie big time by winning the best actress award at the Cannes film festival for playing an enigmatic scientist in “Little Joe”.

Beecham, who has spent most of her career in supporting roles, was a surprise choice for the award for her performance as a botanist working on a flower that gives off a scent so ambrosial it makes people euphoric just to sniff it.

Indeed, she admitted that she was so shocked that “I forgot to pack my toothbrush” when she received a call after she had left Cannes, telling her to come back and pick up the prize.

But while Beecham’s rise has hardly been meteoric, the 35-year-old has been marked out as a talent to watch for a decade, winning best actress awards at both the Edinburgh and London Independent film festivals for one of her first films, “The Calling”, in 2009.

Her big break came two years ago playing what Variety called “one of the more unpleasant characters in recent memory,” a misanthropic young woman who witnesses a stabbing in Peter Mackie Burns’ arthouse gem, “Daphne”.

That helped consolidate the reputation the Manchester-born actress had won for a stream of British television roles including in the award-winning series “The Unforgiven”, and the even more acclaimed “The Village”, where she played opposite Maxine Peake and John Simm in the gritty historical rural drama.

Doors really began to open up for her in the United States, her mother’s homeland, after she landed a small part in the Coen brothers 2016 sword and sandals send-up, “Hail, Caesar!”

By then, she landed the role of the Widow in the U.S. martial arts action series, “Into the Badland”.

Although her father is a pilot, she caught the acting bug at her school, the elite Hurtwood House in Surrey, which bills itself as “the most exciting school in England.”

It is also the alma mater of the “Mary Poppins” star Emily Blunt and Princess Sarah Zeid of Jordan.

Beecham told AFP that she jumped at the chance to work with the highly-rated “Little Joe” director Jessica Hausner.

“She is one of the only female directors I’ve worked with so far. She’s extraordinary,” Beecham said of the Austrian, who was vying for Cannes top prize, the Palme d’Or.

“But I am noticing more scripts and things come through with female directors attached. It’s brilliant.”

The actress, who played opposite fellow Briton and “Mary Poppins” star Ben Whishaw and New Zealander Kerry Fox in the movie, said she was “profoundly inspired” by the French microbiologist Emmanuelle Charpentier and the naturalist Jane Goodall as she researched her role.

“One thing they both talked about, Jane Goodall discussed it specifically, is that her relationship with her family interfered with her research. She kind of had to put (her family) on the back burner and put the chimpanzees in the forefront.”

Beecham said that she tried to work the pain of that into her character, a senior researcher in a biotech firm in the United Kingdom of the near future.

Hausner said she wanted to explore how “crazy” becomes a label used to keep women down.

“I was always fascinated by the films about crazy women. I felt that male perspective and I thought ‘Yeah, but what’s so crazy about them?'” she said.

“The ‘craziness’ of women is actually the very interesting point about them because I think it’s also about being sensitive and intelligent.”

Beecham told AFP after she won the prize that she was drawn to Hausner after seeing her previous film “Lourdes”, set in the French town where some Catholics believe the Virgin Mary appeared.

“So I loved her work already. Ben Whishaw was attached and I read the script and it was unquestionably a great project to be involved in and I really wanted to do it,” she said. HM/JB

The big unforgettable moments at Cannes