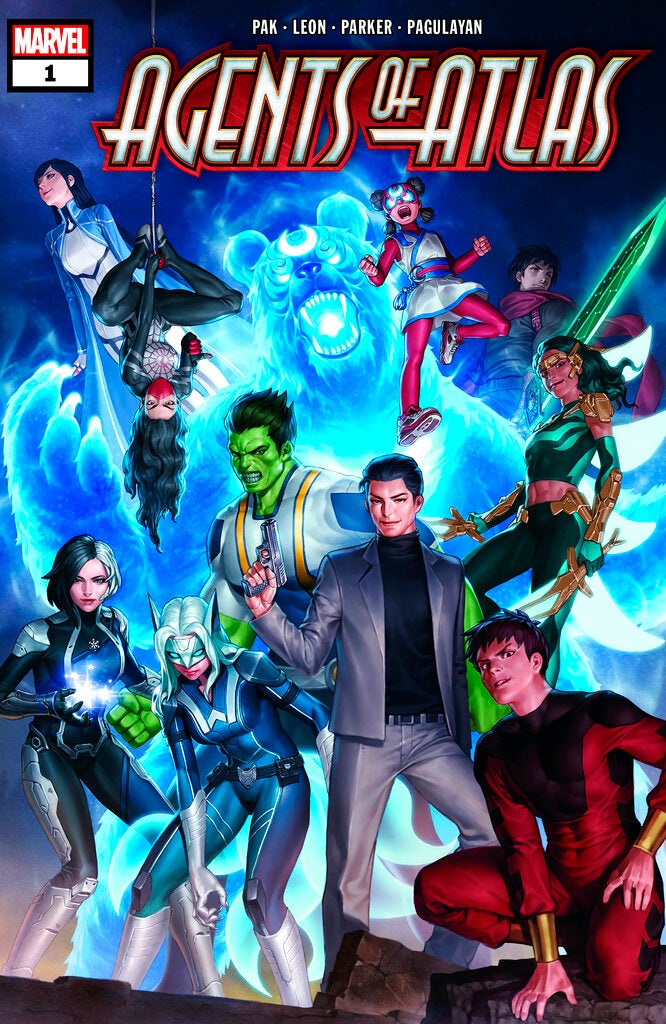 This image provided by Marvel shows the cover of the first issue in “Agents of Atlas,” Marvel Comics’ five-part standalone comic book series set to roll out in August 2019. Marvel Comics is giving ink to an unprecedented team-up of nearly a dozen of its mightiest Asian and Asian American heroes. (Marvel via AP)

Marvel Comics is giving ink to an unprecedented team-up of its mightiest Asian and Asian American heroes, also known as the new Agents of Atlas. Established icons like martial arts master Shang-Chi and newbies like Wave, the newest Filipino superhero, will team up in a stand-alone, five-part comic book series starting this summer, the publishing giant told The Associated Press Thursday.

The roster of 10 super-powered pan-Asian champions made their debut as a team earlier this month in “The War of the Realms: New Agents of Atlas.” That comic book is one piece of an ongoing saga involving several different groups across the Marvel universe, including the Avengers, doing battle with a fire goddess. But the exclusively Asian limited series is set to roll out in August.

The man leading the heroic charge is veteran comic book writer Greg Pak. Pak is credited with ushering in a new era of Asian characters in co-creating Amadeus Cho, a Korean-American genius teen. The character first appeared in 2005. A decade later, he absorbed the Hulk’s powers and started going by Brawn.

“It’s always been my dream to do a team book using a bunch of Asian and Asian American heroes,” said Pak, who thinks there’s more appetite for representation with the success of the movie “Crazy Rich Asians.” ”There’s literally never been a better time in my memory with more opportunities for doing work that specifically includes Asian and Asian American characters.”

The decades-old character of Agent Jimmy Woo (portrayed by Randall Park in last year’s “Ant-Man and the Wasp” movie) leads the pack as head of the revived secret protection society Atlas. Others getting in on the action include Brawn and Cindy Moon, who is the Korean American web-shooter Silk.

Other recruits have only previously been seen in Marvel video games or web comics only available in Asian countries. Among them is Korea-born Luna Snow a.k.a. Seol Hee, a K-pop star who can manipulate frozen elements. There’s also Aero and Sword Master, the products of creatives in China. Besides crime-fighting, the group will spend time doing things like eating dim sum or singing karaoke.

“That kind of diversity within diversity is amazing,” said Pak, who is half-Korean and half-white. “No one character here has to represent all Asian-ness or Asian American-ness. That’s a ridiculous demand for any character.”

The rest of the “Atlas” creative team includes writer Jeff Parker and artists Nico Leon and Carlo Pagulayan. In the series, the do-gooders find that someone has flipped a switch and created a “cross-Asian portal city” called Pan. In Pan, Asian neighborhoods get geographically scrambled and then stitched together into one city. So, the streets of Tokyo could be next to neighborhoods from Honolulu, Manila and some of Marvel’s fictitious Asian countries.

Filipino American Loren Javier, 50, discusses Marvel comics on his “Castles, Capes & Clones” blog and podcast. There were few Asian characters in the lexicon he could look up to as a child, and many were often stereotypical mystics or man-servants.

“I love Marvel but I didn’t necessarily see myself in the comics,” said Javier, who recalls being teased by a classmate who called him “the enemy.”

“Now, finally, I think about kids who are reading this new generation of comics and heroes and getting to see themselves a little bit more,” Javier said. “It’s very powerful.”

Charlie Kirihara, who is half Japanese and half white, was thrilled by “New Agents of Atlas” and tweeted at Pak and Marvel pleading for more content.

Kirihara, 26, said it was a welcome change to see characters that represented Asian and American cultures in “The War of the Realms.”

“I read through the book and realized that was the first time I’ve read a comic book that was all these Asian characters and that wasn’t manga written in Japan,” Kirihara said, referring to a genre of comics or graphic novels. “I want to see it have legs beyond this storyline.”

That’s Pak’s wish as well. But it depends on how Marvel finds the fan response.

“If people buy the heck out of it, I’m happy to keep writing them,” Pak said.

Read Next
Botswana hires Hollywood firm to promote elephant hunting
EDITORS' PICK
Get exciting deals and discounts when you download the new McDonald’s App
Batangas execs, Taal evacuees thank House; hopeful on rehab efforts
SM continues to send relief assistance to remote towns in Batangas
PAL: Passengers with flights to parts of China may request for refund, rebooking
5 years after Mamasapano, son of fallen SAF 44 trooper remembers his ‘idol’
‘A greener, cleaner tomorrow’: A how-to guide for Filipinos who want to help with today’s energy crisis
MOST READ
Taal’s sulfur dioxide emission increases
No time for revelry; Tagaytay instead plans for alert level 5
Seized food items from China tested positive for ASF–BOC
Dina Bonnevie on Coney Reyes: We have forgiven each other
Don't miss out on the latest news and information.