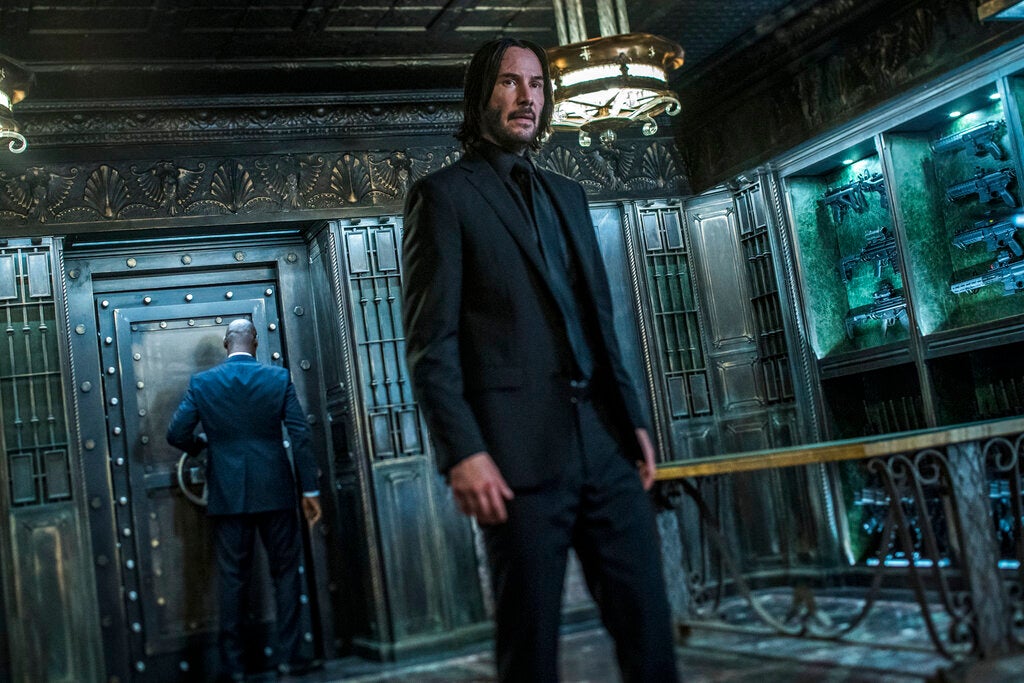 This image released by Lionsgate shows Keanu Reeves in a scene from “John Wick: Chapter 3 – Parabellum.” The third installment of the hyper violent Keanu Reeves franchise has taken the top spot at the North American box office and ending the three-week reign of “Avengers: Endgame.” (Lionsgate via AP)

LOS ANGELES — The box office has a new king and his name is John Wick. The third installment of the hyper violent Keanu Reeves franchise has taken the top spot at the North American box office and ended the three-week reign of “Avengers: Endgame.”

The audience, in other words, is growing exponentially for this series about a talented assassin who never seems to get a break. This time, there’s a $14 million price tag on his head.

Men made up the majority (63 of the “John Wick 3” opening weekend crowd. Overall audiences gave the film a rare A+ CinemaScore, indicating that word-of-mouth will be strong in subsequent weekends. According to Comscore’s PostTrak audience survey, 70% said they would “definitely recommend” to their friends and 21% said they would see it again in theaters.

“This is the best reviewed film of the series so far,” said Joe Drake, chairman of the Lionsgate Motion Picture Group, in a statement. “We believe word-of-mouth will continue to drive strong business for the film all over the world.”

“Avengers: Endgame” slid to second place in its fourth weekend with $29.4 million. Domestically, where the film has grossed $711 million, it’s now second only to “Star Wars: The Force Awakens” ($937 million) and globally, with $2.6 billion, it’s still second to “Avatar” ($2.8 billion).

In its second weekend, “Pokémon Detective Pikachu” also continued to do well, placing third with $24.8 million. But with the high-performing trifecta of John Wick, the Avengers and Pikachu, there weren’t very many moviegoers left over for the less flashy newcomers like “A Dog’s Journey” and “The Sun Is Also a Star.”

“The marketplace was so dominated by ‘John Wick,'” said Paul Dergarabedian, the senior media analyst for Comscore. “It’s tough when one movie over performs by this kind of magnitude.”

Amblin Entertainment and Reliance Entertainment’s “A Dog’s Journey” opened in fourth with an underwhelming $8 million. The Universal-distributed film is a sequel to the 2017 hit “A Dog’s Purpose.” But unlike John Wick, the audience for this sequel was less than half of that for the first, which opened to $18.2 million. But audiences who did turn out gave it an A CinemaScore, which could point toward long-term playability.

Most disappointing, however, is the young adult adaptation “The Sun Is Also a Star” which grossed only $2.6 million from over 2,000 screens and landed in eighth place. Although modestly budgeted at a reported $9 million, and featuring popular television actors such as “Riverdale’s” Charles Melton and “grown-ish’s” Yara Shahidi, the Warner Bros.-released film failed to connect even with the audiences who turned out, 75% of whom were women. It got a poor B- CinemaScore.

“As unpredictable and fickle as young adults are, so are the performances of films that target that audience,” Dergarabedian said.

In limited release, Joanna Hogg’s well-reviewed relationship drama “The Souvenir” did well with $85,851 from four screens.

Even with the success of “John Wick,” the weekend itself was down about 31% and the year to date is still down around 9%, but, Dergarabedian said that this is the calm before the storm. In the next few weekends theaters will see an influx of could-be hits such as “Rocketman,” ”Aladdin” and “Godzilla: King of the Monsters.”

Read Next
Scarlett Johansson and Colin Jost are engaged
EDITORS' PICK
Palace: No house-to-house search for COVID-19 patients
Duterte exults: Oligarchy ended without martial law
How Filipinos are embracing digital technology amid the coronavirus pandemic
Defend Your Health! Shop health essentials from home with Rose Pharmacy’s Online Sale
Water remains our saving grace right now
Like death and taxes, ‘elites we will always have with us’ – national scientist
MOST READ
DPWH Secretary Villar tests positive for COVID-19
Duterte sets off fresh tirades vs ABS-CBN after network lost franchise bid
Palace: No house-to-house search for COVID-19 patients
Military agents shot in the back – DOJ
Don't miss out on the latest news and information.