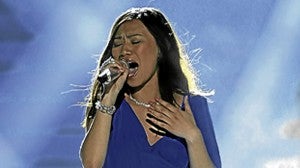 ‘PRIDE OF BATAAN’ The mom of Jessica Sanchez, a hot favorite in “AI,” hails from Orani, Bataan. AP/FOX

Sanchez, a 16-year-old high school student from San Diego, California, with Mexican and Filipino heritage, gave an assured version of “I Will Always Love You” that judge Jennifer Lopez found “just amazing. I don’t even know what to say,” Lopez exclaimed during the show.

“Jessica, you may be the one. You just made 40 million people cry,” Tyler said (adding a dose of hyperbole by roughly doubling the show’s biggest performance night audience for the season so far).

Randy Jackson didn’t hold back either, calling Sanchez “one of the best talents in the whole country.”

Sanchez, an early favorite during the San Diego auditions of “Idol,” was born in Chula Vista, California, to Mexican-American father Gilbert, originally from Texas, and Filipino mother Editha, originally from Bataan. Her grandfather Eddie Bugay is a retired United States Navy sailor from Bataan, while her grandmother Virgie hails from Manila.

In Orani, Bataan, the first thing that catches a visitor’s attention in a house in Apollo Village is a tarpaulin sign that says, “Jessica Bugay Sanchez, The Pride of Bataan, Philippines,” signed by Sanchez’s grandparents.

The neighbors said they eagerly await a visit from Sanchez, who said in an earlier interview that she plans to visit the country soon. The local government of Orani is reportedly preparing a grand homecoming for their “idol.”

The eldest of three children, Sanchez first drew attention as an 11-year-old wild card contestant on the inaugural season of “America’s Got Talent” in 2006. Judge Brandy Norwood then proclaimed, “You’re gonna be huge, I promise.”

Sanchez also performed a moving rendition of Jennifer Hudson’s “Love You I Do” from the movie “Dreamgirls” on the Top 12 Girls night.

The men tackled Stevie Wonder’s catalogue and the women chose from Houston’s hits, a tribute to the singer who died on Feb. 11, on the eve of the Grammy Awards, at age 48.

“I Will Always Love You” was played at the conclusion of Houston’s New Jersey church funeral last month.

The “American Idol” finalists performed as the Fox show marked its 400th episode. In a twist, the male and female singers who ranked lowest in the audience vote were announced on elimination night and the judges decided which of the two was bounced.

Eliminated was Jeremy Rosado, a “wild card” finalist chosen by the judges to join the Top 13 last week. He received mixed feedback from the judges for his rendition of Stevie Wonder’s “Ribbon in the Sky.”

Others who impressed the judges included Joshua Ledet, 19, of Westlake, La., with his version of “I Wish”; Hollie Cavanaugh, 18, of McKinney, Texas, with “All the Man I Need,” Colton Dixon, 20, of Murfreesboro, Tenn., with “Lately,” and Phillip Phillips, 21, of Leesburg, Ga., with “Superstition.”

“You’re a very interesting character, man. You got a lot of ‘fuhgeddaboutit’ in your voice. There are no words for it. You just are. You know what I’m saying,” Tyler said.

Skylar Laine’s version of “Where Do Broken Hearts Go” was another standout.

“You’re a country girl … But what you just proved, you can sing any song,” Jackson told the 18-year-old from Brandon, Miss.

The judges were not uniformly kind.

Elise Testone, 28, of Charleston, S.C., who performed “I’m Your Baby Tonight,” fell short with the panel, which praised her talent but not what Lopez called her “unsure” performance.

Shannon Magrane, 16, of Tampa, Fla., let her nerves get in the way on “I Have Nothing,” Jackson said, and Tyler suggested she might be in trouble in the audience vote. AP, with a report from Greg Refraccion, Inquirer Central Luzon