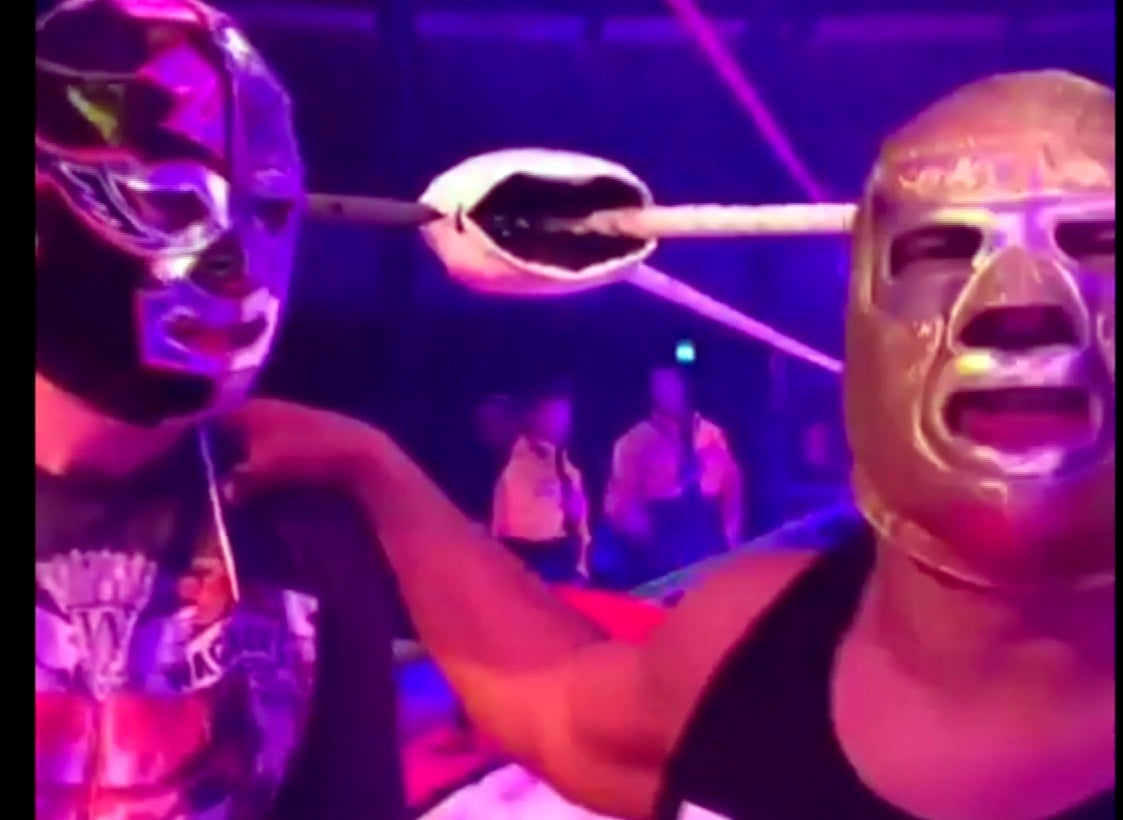 In this image made from video taken on Saturday, May 11, 2019, the Silver King, right, talks to the camera with fan Mark van der Enden at the Roundhouse in London. A fan of a wrestler and actor who died after collapsing on stage mid-performance in London shared the moment he got to meet his idol earlier that afternoon. Cesar Cuauhtemoc Gonzalez Barron, also known by his wrestling title of Silver King, died of a suspected heart attack at the Roundhouse in London’s Camden on Saturday night, promoters said. AP

LONDON, United Kingdom — A well-known Mexican wrestler who co-starred in the film comedy “Nacho Libre” died in London after he collapsed during a match that a witness described as so elaborately staged it wasn’t immediately clear something seriously was wrong.

Cesar Cuauhtemoc Gonzalez Barron, who wrestled with the ring name Silver King, was one of the featured wrestlers of “The Greatest Show of Lucha Libre” on Saturday night. The north London performance venue, the Roundhouse, tweeted just after 12:30 a.m. Sunday that the 51-year-old “sadly lost his life” during the event.

Lucha Libre World, which promoted the Roundhouse event, said in a statement the lucha libre star “suffered what we believe was a cardiac arrest while performing in the show and sadly passed away.”

Gonzalez appeared as a champion wrestler and comic villain in the 2006 movie “Nacho Libre”, which starred Jack Black as a monk who wants to be a masked luchador. Lucha libre is a popular form of wrestling in Mexico that features colorful masks, elaborate costumes and acrobatic techniques.

The description of the show on the Roundhouse’s website said the “awesome and immense Silver King” would take to the ring “portraying his villainous character, the evil rudo Ramses from his role” in the movie.

Gonzalez was struggling to stand up from the first flooring when another blow from Juventud Guerrera sent him sprawling back down front first, the Press Association said. The victorious Young Warrior pinned Silver King and started celebrating his win, the news agency said.

Attendee Roberto Carrera Maldonado told the BBC the wrestler’s condition initially appeared “staged” as part of the fight, before efforts were made to revive him and the audience was cleared from the venue.

“All of us were really shocked. It wasn’t clear what was happening,” Maldonado said. “I had the impression they didn’t know what to do.”

The London Ambulance Service said medics arrived five minutes after they were called to the Roundhouse on Saturday, but the patient was pronounced dead at the scene.

Gonzalez was the son of well-known Mexican wrestler who performed as Dr. Wagner, and one of his brothers is luchador Dr. Wagner Jr. He made his professional debut in the mid-1980s and worked for promoters in Mexico and Japan.

In 1994, he won the Consejo Mundial de Lucha Libre world heavyweight title. Gonzalez competed in World Championship Wrestling between 1997 and 2000, and during 2001-2006 used the ring name Black Tiger III. He went back to being Silver King after he was unmasked during a 2006 match. /cbb