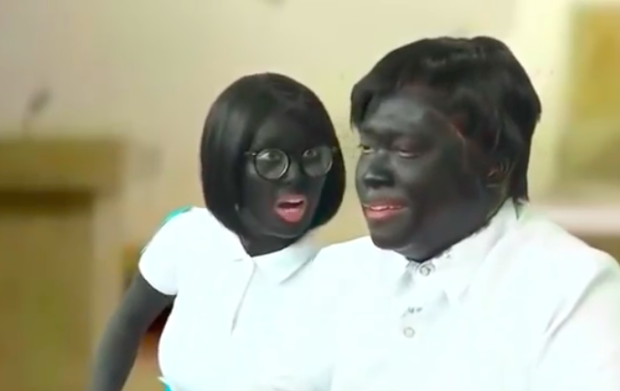 The episode, which has circulated on social media, had the actors wearing black makeup for the scene. Slight changes were made, such as Abby and Junjun’s names to “Ebby” and “Jungjung” and the city of Makati to “Meykati.”

“Ang sabihin mo magnanakaw ka, ninakaw mo yung baon ko ‘nung bata pa tayo (You should say you’re a thief, you stole my money when we were kids),” said Ebby, who was played by Sunshine Garcia.

The episode has since garnered mixed reactions from netizens, with some calling it out for its use of “blackface” to portray the Binays.

A certain Joey Castro Lazaro took to Facebook last May 5 where he shared scenes from the episode.

“A skit was shown in Banana Sundae with the intent of having a spoof of the Binay incident that happened last week,” he said. “The show just used black face to portray the Binay siblings including their father, our former Vice President. Dear ABS-CBN, how could you allow such insensitivity to happen? NOT FUNNY AT ALL. #DisappointedButNotSurprised.”

A skit was shown in Banana Sundae with the intent of having a spoof of the Binay incident that happened last week. The…

The netizen’s post has since garnered over 8,000 reactions and almost 7,000 in shares as of the time of posting. Others also gave their take about the episode in the comments.

However, another echoed the sentiments of Lazaro and said blackface in skits should not even be a thing anymore.

“This skit’s sole intention is to mock people with darker skin tone for a few laughs and giggles,” commented a certain Aeron Sumilong. “I don’t understand how some people could be considered grown *ss adults and still find this funny.”

The “blackface” on the gag show came just a little over a month after a “Maalaala Mo Kaya” episode from the same network saw actress Maymay Entrata don dark makeup to play the role of Aeta beauty queen Judith Manap.

At the time, the episode also garnered mixed reactions with some criticizing the show for darkening the cast’s skin tones, while some others, such as actor Juan Miguel Severo, spoke about the many layers to the issue of using “blackface” in roles.

Blackface is known to have started in the 1830s and is considered to be the first uniquely American form of entertainment in which white men would darken their skin tone to create caricatures of black people.

Blackface performances have been considered racist and offensive since the start and were condemned by civil rights organizations for dehumanizing blacks “by introducing and reinforcing racial stereotypes.” Despite the  controversy behind it, however, blackface became rampant in pop culture and seemed to have been taken as a serious issue only during the rise of multiculturalism in the ’90s.

The scene from the “Banana Sundae” episode may be viewed below.  /ra

Racist history of blackface began in the 1830s

Before multiculturalism, blackface rampant in US pop culture