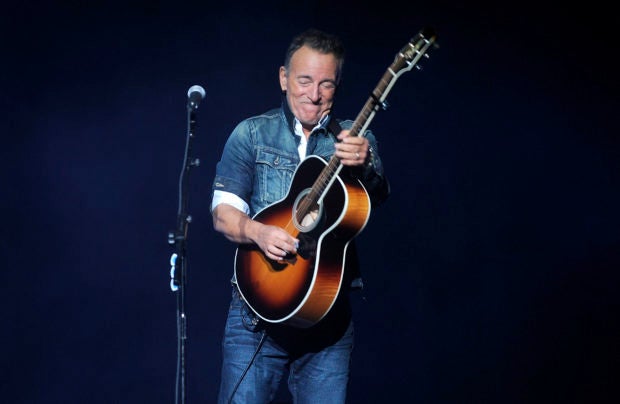 In this Monday, Nov. 5, 2018, file photo, Bruce Springsteen performs at the 12th annual Stand Up For Heroes benefit concert at the Hulu Theater at Madison Square Garden in New York. Springsteen is kicking off the Emmys campaign for his Netflix film “Springsteen on Broadway” with an acoustic performance of “Dancing in the Dark” and a deep and wide-ranging chat with filmmaker Martin Scorsese, the two confirmed Sunday, May 5, 2019. Image: Invision/Brad Barket via AP

With a friendship going back to a fateful meeting at The Roxy in 1975, Bruce Springsteen and Martin Scorsese shared the stage in Los Angeles Sunday night for a wide-ranging conversation about everything from their Catholic upbringings and maturing faith to Flannery O’Connor, concert documentaries and the role of an audience.

The Netflix-hosted event was in support of the Emmys campaign for his one-man show “Springsteen on Broadway” at the streaming service’s FYSEE (a riff on “for your consideration”) space in the heart of Hollywood.

An earnest Springsteen laughed at himself as he prepared to close out the evening and charm the crowd with an acoustic performance of “Dancing in the Dark” that he was “here today begging complete strangers for votes.”

But what better way to do so than with a nostalgic performance and a heartfelt chat about creativity and faith with one of the greatest living filmmakers. And they didn’t waste time getting to the heavy stuff.

“All my work was informed by my years in Catholic school,” Springsteen said to the intimate crowd of Emmy voters and press at the start. “All that redemption, damnation, all the Martin Scorsese films… As I got older I stopped fighting against it. Now I draw on it and enjoy it. There’s no greater well to draw on than myths of Catholicism. Everything is in there.”

He said “Mean Streets” in particular was on point for “An altar boy like myself.”

Scorsese responded that even his upcoming Netflix film, “The Irishman”, deals with the same thing, “Trust, loyalty, betrayal and faith.”

The two said they both find inspiration in the stories of Flannery O’Connor (Scorsese recommended her letters to The Boss) and Springsteen said he’s always found that, “the darkness is more interesting than the light.” He connected it to other artists he finds interesting, from Hank William, to Bob Dylan and Robert De Niro, who he said has a “two-hour face.”

“It’s, ‘what’s bothering that guy? Something is bothering that guy,'” Springsteen said. “Those are the things that keep us watching. That’s why you can watch Bob De Niro’s face for two hours, not 15 minutes. It never gives up its secrets.”

Scorsese added that audiences are often looking for answers, but the art he goes back is the kind that doesn’t provide them, which they both found similar to how they experience faith as they mature.

The two eventually got around to discussing “Springsteen on Broadway”, which was born by accident, after President Barack Obama asked him to play at the White House in the last few weeks of his administration. Springsteen decided to combine performances with storytelling — he’d just written a memoir after all and it was fresh — and that’s what would eventually become the Broadway show and the film.

As with Scorsese’s “The Last Waltz”, ”Springsteen on Broadway” does not cut away to the audience. The director, Thom Zimny, didn’t even want one at first, but Springsteen protested.

They compromised on half of an audience.

“(We) didn’t want to telegraph to the viewer what you’re supposed to feel,” Springsteen said.

The film was taped across two nights, the first night of which Springsteen admitted he botched because he was on stage, “Thinking about what I was doing… When you’re too completely self-conscious you’re not in it.”

And he was striving for De Niro’s “two-hour face,” or, something that would keep the audience interested even though at the heart of it, it’s just, “One old guy and an acoustic guitar.”

He also used monologues and stories to help contextualize the songs that the world knows so well already and “give them renewed meaning.”

“As the songs come out of the monologues it’s as if you’ve never heard them before,” Scorsese said.

Springsteen dedicated his performance of “Dancing in the Dark” to his mother, who just turned 93 and is nine years into Alzheimer’s and doesn’t speak, but she still loves to dance.

“She dances to survive,” Springsteen said. “So lace up your dancing shoes and get going.” CC