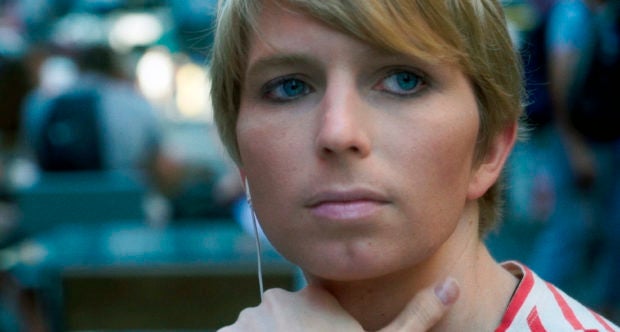 This image released by Showtime shows Chelsea Manning in a scene from “XY Chelsea”, which premiered at the Tribeca Film Festival on Wednesday, May 1, and will air on Showtime on June 7. Image: Showtime via AP

Three years in the making, the Chelsea Manning documentary “XY Chelsea” premiered at the Tribeca Film Festival after being frantically recut to update the film with the latest turn in the saga of the former intelligence analyst.

The filmmakers had envisioned a more celebratory evening.

“A few weeks ago, we were planning for her to be with us on the stage,” director Tim Travers Hawkins said in an interview. “Obviously, things can change fast.”

In May 2017, Manning walked out of the military prison at Fort Leavenworth, Kansas, after President Barack Obama commuted her 35-year sentence for leaking troves of military and diplomatic materials — some 750,000 classified documents — to WikiLeaks. Hawkins, having already connected with Manning through her friend Lisa Rein and Manning’s legal team, was there filming her release.

“The very first time I saw her was through the camera lens,” he said.

“Chelsea XY”, which Showtime will air on June 7 after a limited theatrical run beginning in Los Angeles on May 10, is an intimate look at what followed for Manning, who was known as Pvt. Bradley Manning when she was arrested in 2010 after, while on leave from Iraq, she uploaded the Army reports that came to be known as the Iraq War Logs.

Almost two years after being freed, Manning was jailed again in March after being found in contempt for refusing to answer questions before a grand jury about WikiLeaks and its founder, Julian Assange, who was arrested on April 11 at the Ecuadorian embassy in London . Manning can be held as long as the government believes it still needs her testimony in the case, a process that could take years.

Manning’s lawyers have said the government is abusing the grand jury process and that she disclosed everything she knew in earlier court-martial proceedings. “I don’t have anything to contribute to this, or another grand jury,” Manning said in an earlier statement. “While I miss home, they can continue to hold me in jail, with all the harmful consequences that brings.”

Manning was in solitary confinement for a month but is now jailed with the prison’s general population.

“I’m very concerned about her being there and I’m concerned about what this means for the rest of her life, that this is just another example,” said Nancy Hollander, an attorney for Manning, after the film’s screening Wednesday night. “The government is going to continue to go after her.”

Producer Isabel Davis said “XY Chelsea” was done and locked when Manning was again imprisoned. Changing the ending was, she says, “obviously quite a hard thing to make happen.”

“It’s taken a lot of good will on people’s parts to make it happen,” said Davis.

Hawkins adds, though, that the arc of the film remains the same, that there was always an ominous sense of concern around Manning, “an impending doom” that Manning herself mentions in the film.

The film captures Manning as she gets acquainted to both herself and to civilian life after seven years imprisoned. Manning is seen learning how to put on make-up in the film and playing video games. She discusses her anguished upbringing in small-town Oklahoma and her impromptu enlistment.

“I’m not the person people think I am,” Manning says.

The effect on her of more than 170 days in solitary confinement she spent, beginning in Kuwait, is apparent. Manning several times tried committing suicide in prison.

“I just remember whenever I was in Kuwait that I died. I was alive but I was dead,” Manning says in the film. “And I’ve been dead ever since.”

Hawkins says he hopes “XY Chelsea” will allow people to know Manning “in an emotional way.” For him, Manning’s difficult young life as an outsider to her family and to society led to her empathy for the victims of the Iraq War.

“The media played a part in really distorting the relationship between her identity and the disclosures,” says Hawkins. “Part of what this film is is teasing that apart in order to reframe it.”

That frame is, in part, a coming of age story, albeit one in extraordinary circumstances, and always with a shadow over it.

“Three years ago today, I have a letter from Chelsea when she was still in prison at Leavenworth,” says Hawkins. “And she makes kind of a dark joke: ‘I think I’m going to miss the premiere.'” CC

At Toronto Film Fest, Oscar isn’t the only rage