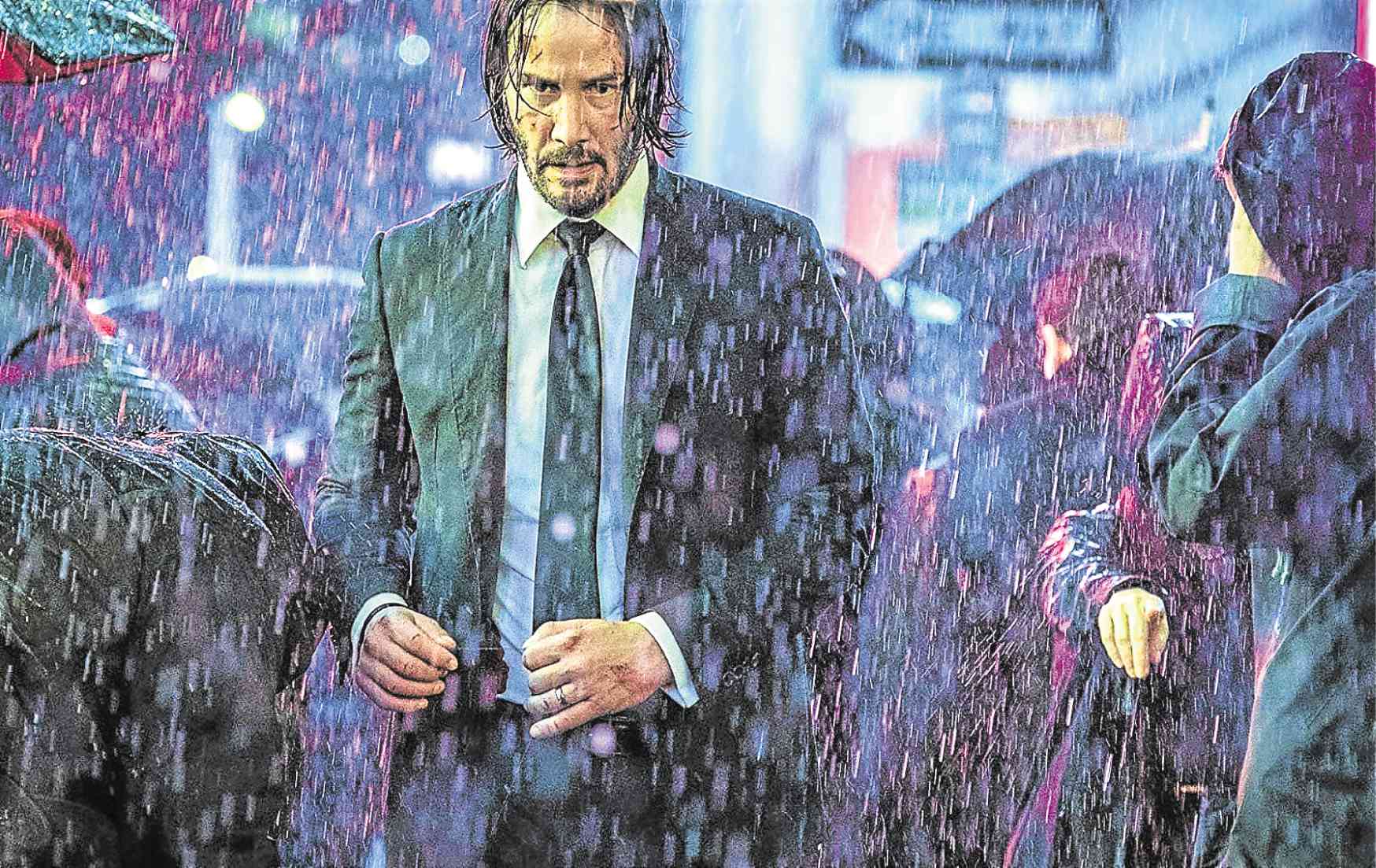 LOS ANGELES—Keanu Reeves was back to being a man of a few words. In our previous interview, the actor was surprisingly, wonderfully almost loquacious.

But in our recent chat at the Four Seasons New York Downtown, Keanu was his usual shy self. Make no doubt about it—he is charming, even funny at times. So imagine the bashful actor being asked who he was wearing. 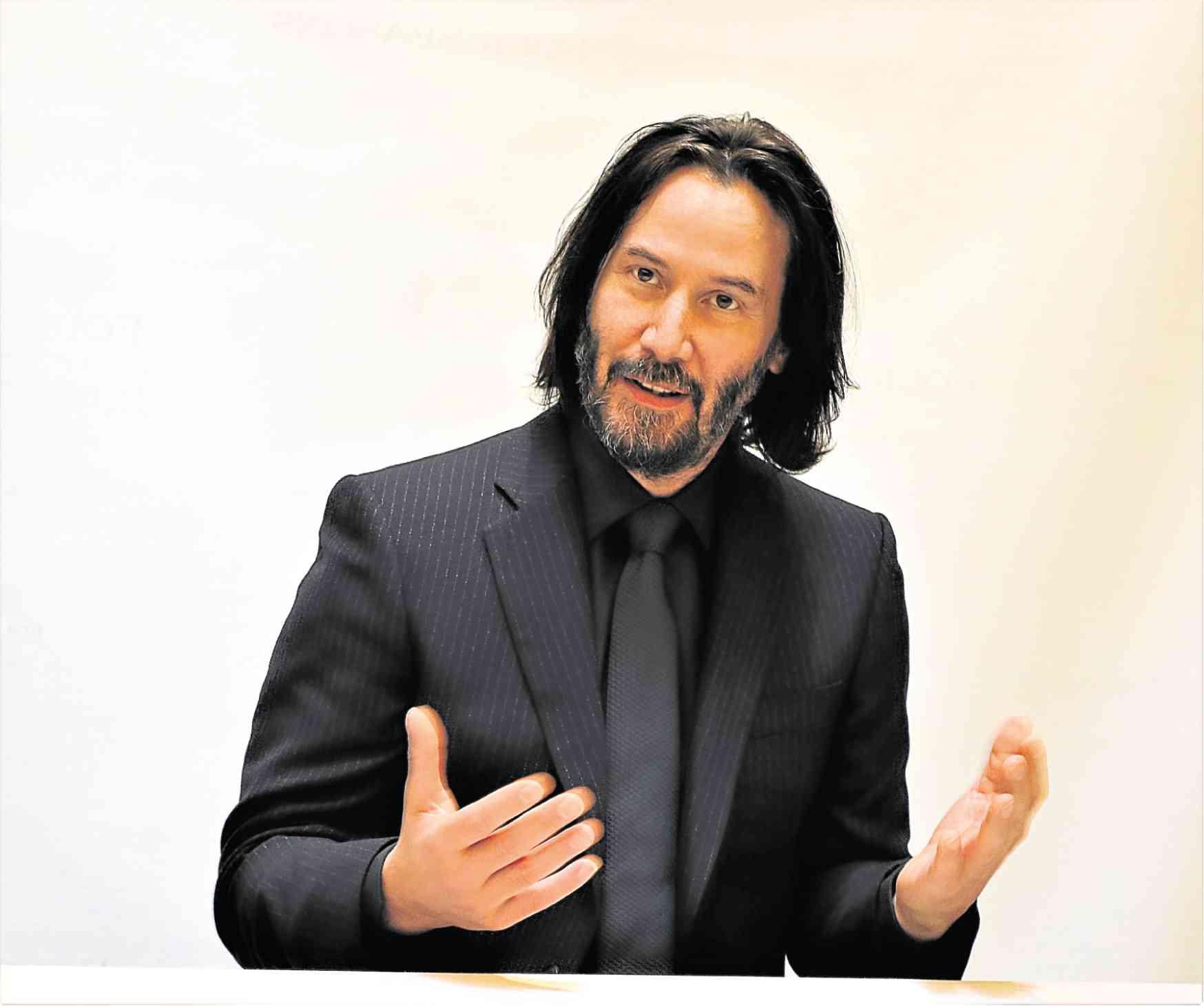 “Really?” he asked aloud with a smile. With his long dark hair and beard matching his all-black outfit, Keanu looked like he jumped straight from a screen showing “John Wick: Chapter 3–Parabellum,” which he was promoting that morning.

“This is from a London suit maker named Chester Barrie,” the 54-year-old obliged. “The shirt is from a shirt maker called Anto. The boots are from a London company called Grenson.” With a surprise playfulness, he laughed as he quipped, “And I will keep the underwear private.”

But “The Matrix” star was effusive when we asked him about Fil-Am actor Mark Dacascos, with whom he has a thrilling climactic fight scene in “John Wick 3.”

Directed by Chad Stahelski, the latest installment of the action series sees Keanu as the titular super assassin who is himself the target of hit men and women, led by Zero (Mark). 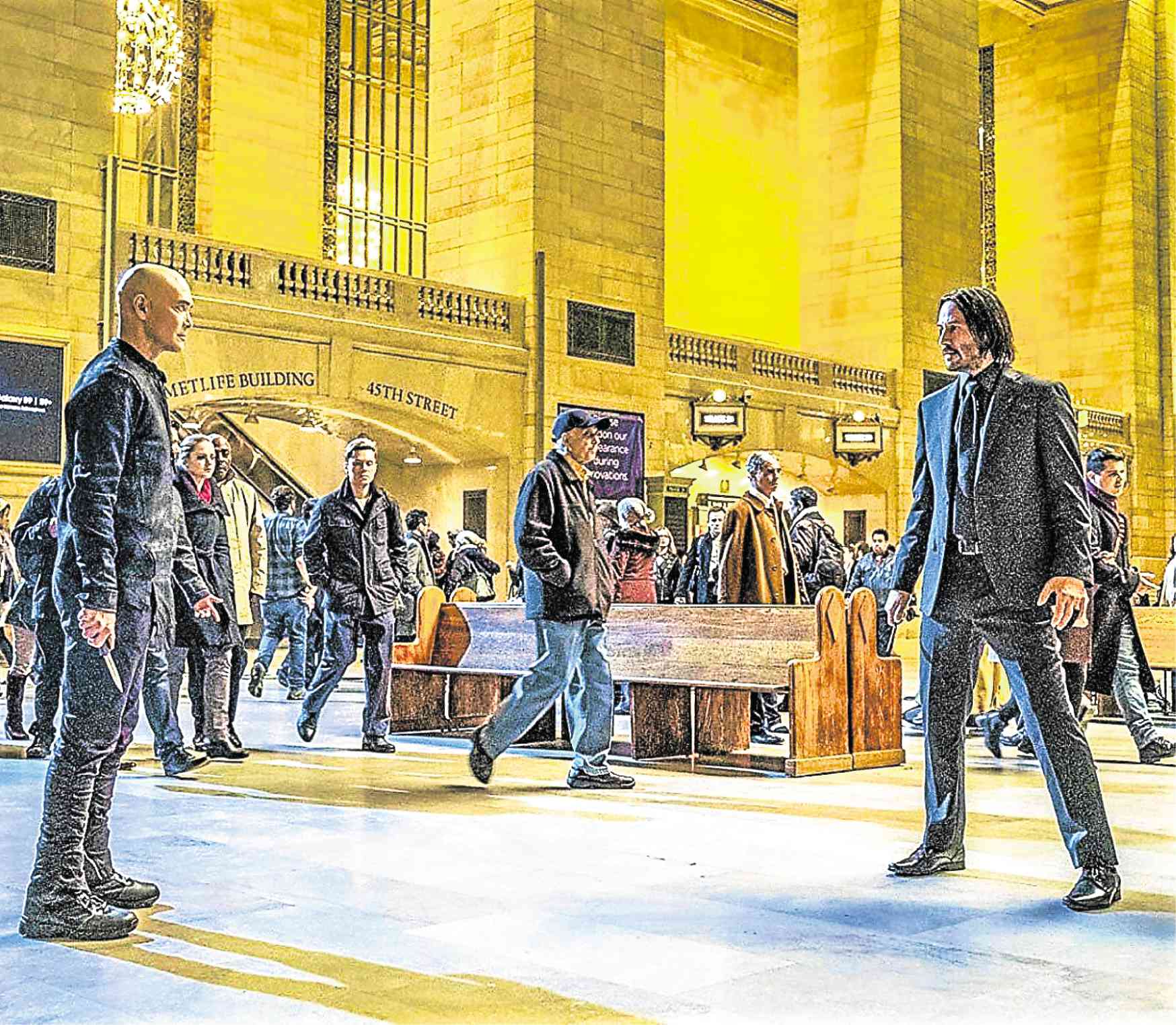 Can you talk about filming that climactic fight scene with Mark Dacascos? He said he was impressed with your judo and jiujitsu skills and how strong you are. That’s kind of Mark to say.  Yeah, he’s so good—his timing, skill, movement. So we had a pretty interesting fight to do. It was a character fight in the sense that there was storytelling.

He’s the master and the ninja who can hide and come from other places. And there’s a story where he is like, “We can be friends (laughs). You are a lot like me.”

Then, through the course of the fight, that story … changes. I start disappearing on him. It was a showdown between the two bastards. I thought there was a nice desperation in the fight, a nice decay that goes from, I am wild and he is controlled and that changes. So yeah, it was a lot of fighting.

Mark has good control and power. We were not really hitting each other, but there were a couple of kicks where I was like, if Mark really wanted to do it, I would be on the ground. So yeah, it was a lot of fun. 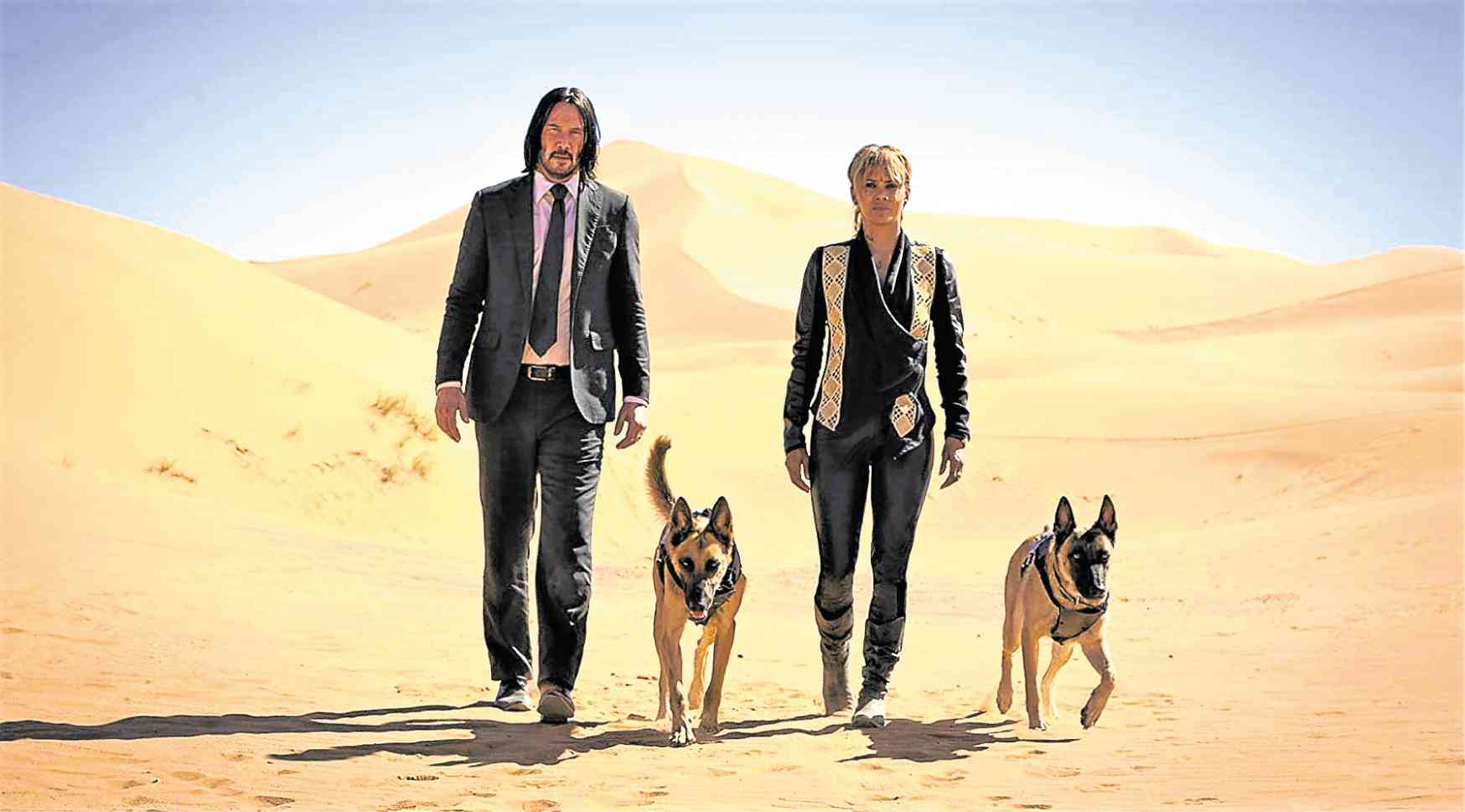 People who can see them, they will be like, oh my gosh, he just did that or what was that throw? So yeah, there is a lot in there.

Do you count how many John Wick has killed in all three movies? I don’t. They are trying to kill me, so I am not concerned. I guess I am concerned with how many are alive.

You are a man of few words. A lot of your movies are dominated by physical activity. What is your relationship with verbal versus physical expression in terms of your project preferences? I don’t have a preference. I just play roles that I get to play the best I can.

I have been described as being known for performances that don’t speak a lot. John Wick doesn’t need a soliloquy, but he certainly has some moments.

So you don’t seek out these kinds of roles then? Yeah. I guess I must be good at it then.  Did you see “Destination Wedding?” I did some talking in that (laughs).

Were you nervous about those dogs in this movie? By the time I walked in to do scenes with the dogs, Halle Berry had been with them for three to four months.

The first note I got was, “Don’t look them in the eye (laughs).” I asked [the dog trainers], “What do you mean?” Like, “Don’t look at them. Halle’s got it. You don’t. When Halle walks, you walk too, but don’t look at the dogs in the eye. Get to where you are going, stand there until we get the dogs, then walk again.”

I was like, cool, this is serious, alright. Then, we did it. By the end, when the animals would go in, they had been trained for over eight months to do the kind of attacking and training that they had. So there were times where they had to go in, and I had to go in.

There was that one sequence where we would go with Jerome Flynn, who plays Berrada. After the mayhem, I come over and shoot a guy in the head and the guy is still pulling a gun, and you see Halle and I just standing there where the dog is like, grrrr (laughs)!

In one scene, when Halle screams for help, you come running to her. In real life, when you scream for help, who comes running? Whether you are a believer in it or not, you generally have to help yourself.

It’s also great if you can have help. I have yelled for help only once in my life. I had a motorcycle accident in Topanga Canyon (California). It was at night, and I yelled for help.

Out of the darkness, someone basically yelled, “Help is on the way!” Then, I saw the flashing lights of an ambulance coming down a hill. So, thank you for that. I never met them (the people who called for the ambulance).

With so much of the mythology of this “John Wick” series rooted in the fictional Continental Hotel, in your own life can you look back at the first luxury hotel that you remember staying in? The Chateau Marmont in Los Angeles. I arrived in Los Angeles in 1985. I had been there before, but the Chateau Marmont has mystery, rock and roll [history] and a really amazing vibe. I still love going there to this day.

Can you share an anecdote about a memorable experience at the Chateau Marmont? This was about the kindness of the Chateau and why I regard it with such fondness.

There was a moment in time when I didn’t have a place to live. I ended up staying at the Chateau for quite a while. I would go work and leave my belongings there. They’d keep them, then I would come back.

When I came back once, they had done the Chateau Marmont letterhead, and they put “Keanu Reeves in residence.” I was like, thank you! It was wonderful to have such a place to be safe and to come back to.

Did you get invited? I didn’t receive an invitation (laughs).

Does music still play a part in your life? The band (Dogstar) broke up a while ago. We have gotten together a couple of times to play. I have a bass at home and once in a while, I play it. I haven’t jammed with anyone else, except for the people I played in the band with. The drummer has a rehearsal room, so we get together and play some of the old songs (laughs).

Are you able to lead a pretty normal life in LA? In Los Angeles, my days are pretty normal. There are the tourists who ride in (Movie Star Home Tour) vans and trucks, visit everybody’s homes and stuff.

I will come out in the morning and get my newspaper. Sometimes you feel like an animal in a cage. They are looking, like, “There’s one (laughs)!” I get it.

But my days are pretty normal. No one cares. There is definitely paparazzi in LA, but I don’t go out much. I don’t really do anything. I’m pretty boring.

Would you like to do “John Wick 4”? Yeah, I do. I love the character, and I would love to continue the story. I think there is another story to tell. I don’t know if Chad would be the director.

It will not be “John Wick” without Chad. I know. But we will see.