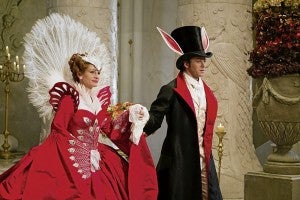 JULIA Roberts and Armie Hammer in “Mirror Mirror.” On their first shooting day, he had to lick her face.

LOS ANGELES—He gets to lick Julia Roberts’ face and keep his chest hair in “Mirror, Mirror.” He has the title role in a movie with Johnny Depp, “The Lone Ranger.” He is married to the woman he knew he wanted to spend the rest of his life with, the first time he saw her.

These are good times to be Armie Hammer. And he knows how to give a reporter lots of fun in an interview. That’s because Armie is, like George Clooney, a genuinely nice guy with a great sense of humor.

He arrived at the interview in Santa Monica’s Casa del Mar sporting longish hair. “Not my choice,” he said, flashing that Prince Charming—well, Prince Alcott—smile. “I would like to shave it all off.” It’s for his Lone Ranger character (a.k.a. John Reid), which he has begun filming with director Gore Verbinski. Standing at 6’ 5”, Armie makes us look like one of the dwarfs in the film.

The interview started on a funny note about Armie licking Julia’s face. The humorous tone prevailed throughout the interview, thanks to the actor’s candid, down-to-earth, joking manner. In “Mirror, Mirror,” directed by Tarsem Singh, Armie’s Prince is given a “puppy love” potion by accident by Julia’s evil queen (Lily Collins is Snow White with Sean Bean as the King and Nathan Lane as the Queen’s bungling servant).

“It definitely felt surreal,” Armie said, chuckling about acting like a puppy and slobbering all over the actress’ face. “That was our first day of working together, our first scene. So it was like, ‘Well, nice to see you. Ready? Okay?’ (He stuck his tongue out and demonstrated a big wet lick.) It was just like a nice-to-meet-you kind of thing.”

Playing the puppy love scene, Armie said, was made easier because he actually had a baby dog, Archie, at the time. “The night before I filmed that scene, I thought, I’m going to give Archie a bath and just see what happens. I did and he ran all over. When he sat, he shook and he was so excited. I thought, oh, okay, I’ll take a little bit of that. I kind of acted like my dog.”

He admitted being intimidated, acting with Julia. “But what surprised me the most was how well she knows every single aspect of this business. Like she would say, ‘What lens are you putting on there?’ When she hears the answer, she would go, ‘Oh, okay, so it would look better if I do this.’ Or she’d ask, ‘What light are you putting up there?’ ‘Oh, okay, so it’s better if I’m in this angle.’ Everything she does, she’s in control of. It was great to watch a true professional do that.”

The conversation turned to his hairy chest as he hung upside down in one scene. “It’s funny but there was actually a period on the set when it turned into a big debate because the original line was something like ‘smooth and hairless,’” he said. “They were like, ‘You have to shave your chest.’ I was like, ‘Wait a second, I spent 25 years growing this chest hair. I am not shaving. I refuse.’ They said, ‘You have to. The line says, ‘Hairless.’ I said, ‘Change the line.’ Fortunately, they changed it.”

Armie stressed that he didn’t want to be known as the guy who liked to take his shirt off. He said, “I remember in the beginning of the filming when Tarsem was like, ‘Hey, do you want more shirtless scenes?’ I was like, ‘What?’ The idea was, this guy is a prince, not a guy who goes to the gym. He sword-fights, maybe goes hunting and horseback riding and stuff like that. It doesn’t make sense for that character to like, have these pecs and abs. Back then, they had no concept of nutrition and exercise. It was a chance for me to get a little bit lazy. I got a little bigger and built like a modern guy for ‘The Social Network.’”

About the upside-down scene, he explained: “There’s no easy way to do that. It’s the worst. That was the longest day of filming for the whole movie. In ‘The Lone Ranger,’ I have another scene where I have to hang upside down. As soon as I read that in the script, I was like, ‘Oh, no!’ They tie you upside down and your feet are attached to this crane. Then they pull you up. You can only be upside down for about two minutes before your face turns purple and all the blood goes to your head. Your eyes start to swell and your cheeks get really big. They go, ‘Okay, bring him down.’ It looks too weird. I must have been hauled up and down over 30 times.”

We asked him for details on “The Lone Ranger” shoot and he gamely obliged. “Johnny and I have not done any scenes together,” Armie began. “We’ve done a couple of camera tests together. We’ve finished the first week of principal photography. It’s going so well, I’m so relieved. If it’s like that for the next seven months, I’ll be the luckiest and happiest dude in the entire universe. It has all been great—being in a Jerry Bruckheimer production, seeing how everything just flows so smoothly and watching how Gore is in such capable control of everything he’s doing. And watching Johnny do his stuff… he’s a genius.”

Armie said he had looked forward to shooting with Johnny, who plays an American Indian named Tonto. “Next week, we start doing the stuff between Johnny and me which is really

HAMMER with longish hair: “Not my choice.” photo by RUBEN NEPALES

what this movie is about,” he said. “It takes place in a frontier town in the 1800s. More than anything, it will be a great, funny adventure, buddy comedy driven by the relationship between the Lone Ranger and Tonto. It’s about how they get along over some things and then quibble about other things. They’re like an old married couple.”

On filling his forebears’ shoes, Armie, whose father Michael Armand Hammer owned several businesses, including a film and TV company, said: “If you come from successful parents, grandparents or great grandparents, those are big shoes to fill. Fortunately, I just decided to try on a different pair. I tried to become an actor instead of going into business so I really did get to do it for myself. I guess I’m blazing my own trail. Nobody in the family was an actor so I’m experimenting. There are no shoes to fill. I get to go on my own adventure, which is exciting.”

Armie admitted that his family was initially disappointed with his decision to pursue acting: “I decided that I was going to quit school and start studying acting. They weren’t prepared for that. It wasn’t until I had proven that I was passionate about it and that I was willing to work harder at it than anything else in my life … that’s when they approved of my decision.”

So far, he has been on a winning streak—from playing the Winklevoss twins in David Fincher’s “The Social Network,” the rumored gay lover of the FBI director in Clint Eastwood’s “J. Edgar” to Gore’s “The Lone Ranger.”

“I am just lucky,” Armie said.  “I’ve been very fortunate to work with amazing directors. Part of being a great director is surrounding yourself with a team of people who are all fantastic at what they do and love what they do. So I’ve been lucky to go from one great team to another. Starting with David Fincher, it was like, where do you go from that one? He is one of the best directors. Then going to Clint Eastwood, a legend, and then Tarsem who is a visual genius, and Gore Verbinski, who just won an Academy Award.”

The most remarkable anecdote that Armie recounted was how, when he saw TV personality Elizabeth Chambers, he was certain that he had found his lifetime partner. “I can tell you exactly what she was wearing the first time I saw her,” he said, beaming. “She was wearing gladiator sandals, blue jeans, a Free City sweatshirt and golden hoop earrings. She had wavy hair because it was raining. She got out of her car and I was like, yeah, that is the perfect woman.”

“I don’t know if you can call it love at first sight,” he clarified. “She had a boyfriend at the time so, respectfully, nothing happened. We became friends, which was a great way to know each other under no pretenses. I was still enamored with her, amazed that someone like her could exist.”

He related: “It was after the presidential debates in 2008… I had a lot of people in my house to watch the debates. As everybody was leaving, I was like, ‘Would you stick around? We need to talk.’ I called her Elizabeth Chambers at the time because she was too much woman for one name. I said to her, ‘Elizabeth Chambers, you have to sit down. We’re going to talk. I’m going to be really blunt.’ She was like, ‘Okay.’ I said, ‘I’m going to tell you what you have to do.’

“She had this look on her face like, you’re going to what? I go, ‘You’re going to break up with your boyfriend because we’re going to start dating.’ Her mouth just kind of… what? I said, ‘Look, I’m not saying you don’t care about him. But there’s obviously chemistry between the two of us. This is something we can’t ignore. Do you want us to do this now so we end up at 80 years old, rocking chairs together, going, ‘What an amazing trip the whole time!’”