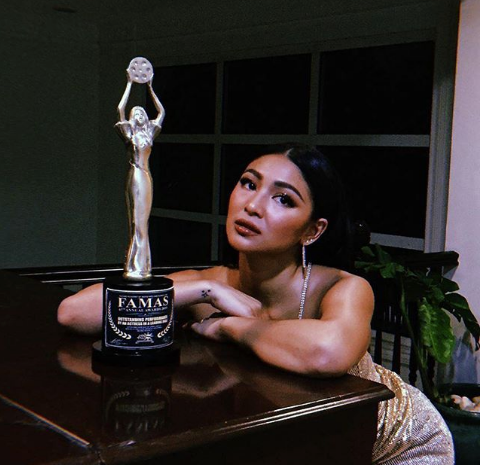 Lustre bested actresses Judy Ann Santos, Anne Curtis, Sarah Geronimo and Glaiza de Castro, among others, for the coveted award in her role as “Joanne” in Jadaone’s romantic drama “Never Not Love You.”

Prior to “Never Not Love You,” Jadaone first worked with Lustre and actor James Reid in the television series ”On the Wings of Love” and “Till I Met You” in 2015 and 2016, respectively.

“Hindi sinasabing ako ang nanalo pero parang ganun na nga (I’m not saying I won, but it feels as if I did),” she added. “(PS. @james! Gio!!! Ikaw rin naman (You too)!!! (PSS. Hahaha I keep editing my caption! Nakaka-proud ka atiiiiiiiiiiiiiiiiiii [I’m proud of you, girl]).”

“Never Not Love You” tells the story of a young couple, graphic designer Gio Smith (Reid) and ambitious career woman Joanne Candelaria (Lustre), who prioritizes Gio’s London-bound career. Beyond mere “kilig,” the film shows the many sacrifices and pains that come with romance, such as the challenges of long-distance relationships and the realities of migration, among others.  /ra