Iconic props from “The Shining” and “2001: A Space Odyssey” that detail the single-minded perfectionism of US filmmaker Stanley Kubrick are among the highlights of a new London show dedicated to the late artist. 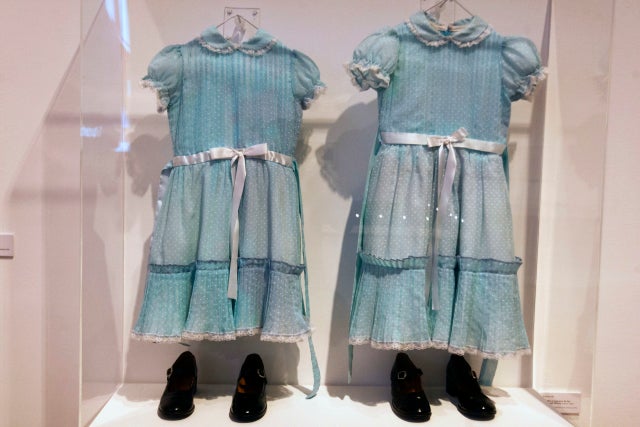 Part of the more than a thousand pieces of films, photographs, documents, booklets and posters from the movies of filmmaker Stanley Kubrick on exhibit at the Museum of Contemporary Art ( MARCO) in Monterrey, Nuevo Leon State, Mexico, on March 5, 2015. Image: AFP PHOTO/Julio Cesar Aguilar

Visitors can discover Kubrick’s universe and special relationship with Britain through some 700 objects, film clips and interviews, which are arranged according to the 13 films he made over a 50-year career.

The exhibition’s most famous items include Jack Nicholson’s axe from “The Shining”, the disturbing costumes from “A Clockwork Orange” (1971), the “Born to Kill” helmet worn by character “Joker” in “Full Metal Jacket” and Tom Cruise’s Venetian cape and mask from “Eyes Wide Shut” (1999).

Other exhibits detail his obsessive attention to detail, including a photograph of the snow-covered hotel in Oregon that would eventually be used for the outside shots of The Shining.

Labels stuck on the image include instructions for how the path should appear in the shot, adding “THERE IS NO OTHER WAY TO DO IT, REPEAT NO OTHER WAY.”

The “2001: Space Odyssey” section includes a model of the 12-meter “hamster wheel” used by astronauts in the film to simulate gravity.

The story of the filming of Vietnam war epic “Full Metal Jacket” forms another part of the show, which will run at London’s Design Museum from Friday until September 15.

Others reveal the complicated, and often fractious relationship between Kubrick and his audience and the critics, starting with 1962 classic “Lolita”, which details a middle-aged man’s obsession with a 12-year-old girl.

“We believe that any such film must have a deleterious effect upon our society (…) and therefore ought not be made,” Reverend John Collins wrote in a 1961 letter to Kubrick.

The legendary director died on March 7, 1999, in his mansion in Childwickbury, north of London.

In addition to the exhibition, a hunt through the archives of “A Clockwork Orange” author Anthony Burgess have unearthed a never-before-seen unfinished “sequel” to the 1962 dystopian novel, it emerged Friday.

The manuscript was written by the British author, who died in 1993, in response to the moral panic surrounding Kubrick’s ultra-violent 1971 adaptation of the novel, which was blamed for copycat crimes.

“The Clockwork Condition” describes 1970s society in terms of humans being reduced to cogs in a machine, “no longer much like a natural growth, not humanly organic.” NVG

Bob Dylan’s paintings to be featured in Tulsa museum