Theron talks about her lessons in relationships, reveals her daughter is transgender 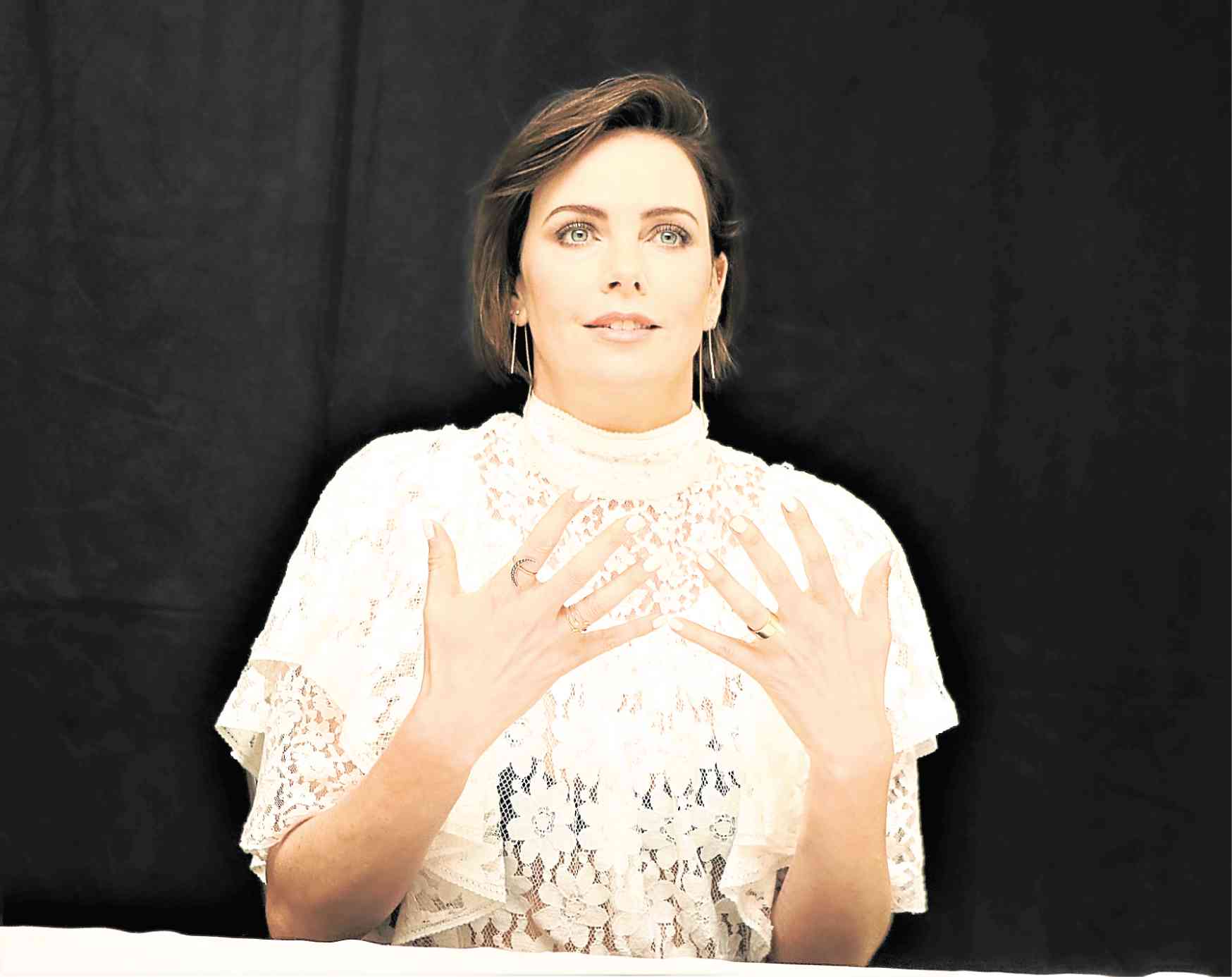 LOS ANGELES—“Not just recently but in my life, I have encountered a feeling of having to make myself a little less in order for my life to be comfortable within a relationship.”

That was Charlize Theron, candid as usual on a variety of topics, from her experience with men intimidated by her, dating, career updates and revelation that her older child is transgender.

The statuesque actress, speaking to reporters in Los Angeles, continued about some of her previous relationships where she had to “downplay” herself. “Then I grew up and I said, f**k that. I have experienced that where I realized my relationship will do so much better if I just make my life—me—a little smaller.

“Then, you realize you aren’t living your full potential, then you start resenting somebody. That is horrible. I’d rather be single than resent somebody for not letting me be who I know I am. You can guess who that is.”

The actress, whose last serious relationships were with actors Sean Penn and Stuart Townsend, wore a white lace blouse and black leather pants. She has gone from blonde to brunette.

In the romantic comedy “Long Shot,” Charlize plays Charlotte Field, a secretary of state who runs for the US presidency. Playing her leading man is Seth Rogen. He portrays Fred Flarsky, a nerdy journalist hired to be Charlotte’s speech writer. Guess what? The unlikely pairing works, and so does the movie, directed by Jonathan Levine. O’Shea Jackson Jr., June Diane Raphael and Ravi Patel are solid in supporting roles. 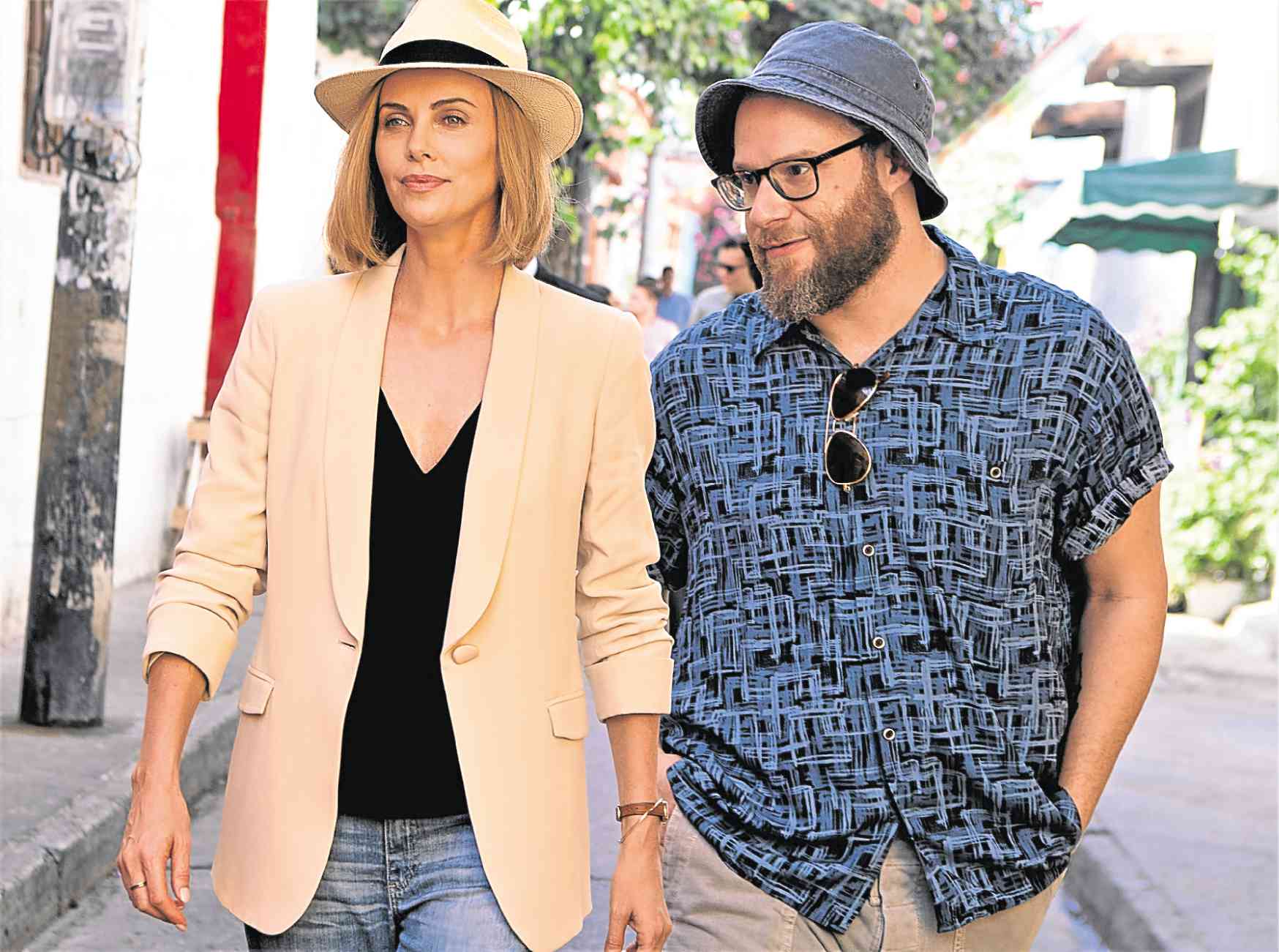 Since Charlize portrays America’s top diplomat who has to travel around the world, “Long Shot” is set in various countries, from Colombia, Argentina to the Philippines. A coup d’état in Manila forces Charlotte and Fred to flee to a beautiful island, still in the Philippines. Colombia—Cartagena, to be exact—subs for the Philippines and most of the other globe-trotting settings.

When we told Charlize to visit the Philippines and see the real deal, she was game for it. “You don’t need to twist my arm,” the South African enthused.

“Hey now!” Charlize happily exclaimed when we said that she and Seth had—surprise, surprise—good chemistry (even the sexual one) onscreen.

Asked if she ever thought that someday she and Seth would play romantic leads together since they actually have sexual chemistry in their scenes, the actress answered, “Wow, that’s a loaded question (laughs). I don’t think actors read scripts and go, yeah, I could have sex with him. I will also say that there’s a misconception that you have to be sexually attracted to your costar in order to have chemistry.”

Laughing, Charlize admitted, “Seth and I were very concerned, because we did like each other so much that we kept saying to each other, are we making a bad movie? Because that is usually a bad sign.”

In our separate interview with Seth, he confessed that he was, and still is, intimidated by Charlize. When told about this admission by Seth, Charlize immediately quipped with a smile, “Good!”

Then, the 2003 Oscar and Golden Globe best actress winner for “Monster” added, “Did he really say that? He is Canadian. He’s such a team player, so I think he’s just trying to be nice.” 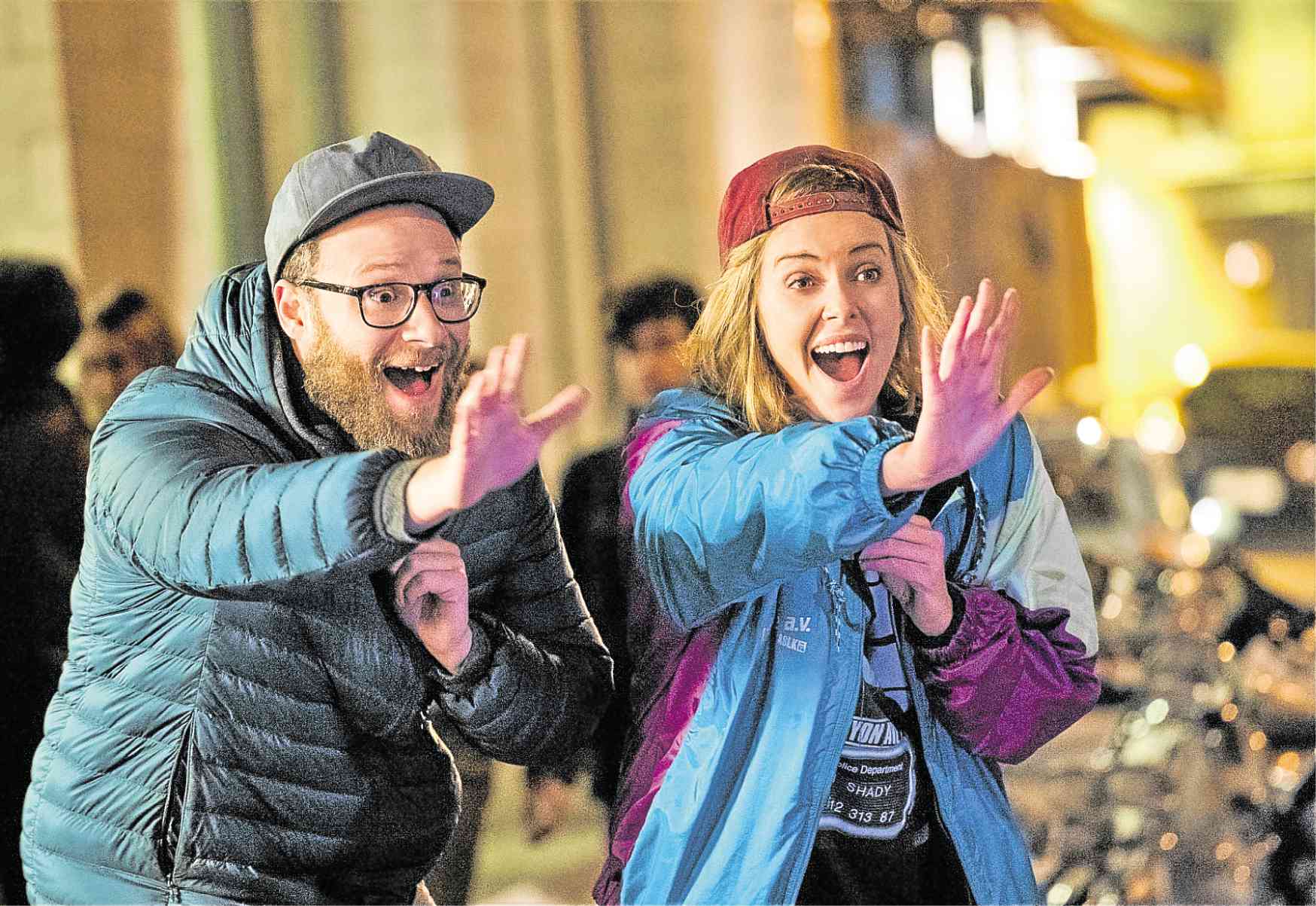 Since Seth’s Fred is a geek whose idea of formal wear is turning up the collars of his everyday Looise AV jacket, Charlize was asked about nerdy men. She replied, “I didn’t have boyfriends, but I was actually attracted to nerds when I was in high school.

“I had one crush on what you would consider a hot guy, and he never paid any attention to me. Once I started hanging out with the nerds, I got that attention.”

Charlize grew up on a farm outside Johannesburg, South Africa. Her volatile life as a teen has been widely written. At 12, the promising ballerina left home to study in an arts school in Johannesburg. It was also a move by her mom Gerda to keep Charlize away from a tough home life with her alcoholic dad, Charles. He was reportedly abusive toward Gerda.

In 1991, while Charlize was at home on a school break, her parents got into a domestic dispute. It escalated into Gerda firing at Charles in self-defense from her attacking husband, who was shooting a gun at her and Charlize. Gerda got her own handgun, shot back and killed Charles. Gerda wasn’t charged.

The emotionally shaken Charlize resumed her boarding school studies. A modeling contest win led Charlize to Italy and, consequently, New York, where she began training with the renowned Joffrey Ballet. But a serious knee injury ended her ballerina dreams.

When the 19-year-old moved to LA to pursue an acting career, a hissy fit in a bank when the teller refused to cash her out-of-town check (rent money from her mom) caught the attention of a talent manager. John Crosby was standing next to her in line.

The rest, as the cliché goes, is the proverbial out-of-town girl becomes a star Hollywood story. Charlize has become one of the most respected actresses today.

On saying that she was “shockingly” single for the past 10 years in a TV show, Charlize laughed as she said, “I have dated for sure and I’ve learned from Seth that good comedy lives and breathes in the extreme. So that’s where I went with it and now I have opened a giant can of worms (laughs).”

Asked what her worst date was, Charlize began, “It wasn’t actually a date, but a dinner with me was auctioned off with somebody for a charity event. He was obviously a wealthy man and made this generous donation. But he really thought he was going to have a date with me (laughs). And I wasn’t prepared for that.

“By the end of the night, I realized that I was actually on a date, whether I liked it or not. The whole night, he kept saying to me, ‘I don’t really like blondes, and you’re just too tall. I don’t know any of your movies.’ Everything was just so negative. He thought that was impressive.”

According to Charlize, she has been turned down by men “many times. Like, you go on a date with a guy, and he doesn’t call back. It happens to everybody.”

Since her character becomes the first female American president, Charlize was peppered with political questions. She graciously deflected such questions. After being lobbed yet another political query, she chuckled and said, “Oh God. Can I get a vodka?”

But she was asked yet another such question—how would she be different from Donald Trump if she became Potus?

“So I guess you aren’t going to help me,” she reacted with a laugh. Still chuckling, she buried her head on the table in mock frustration. Then she answered, “Oh gosh. I would be a woman. That’s my answer. That’s a huge difference.” 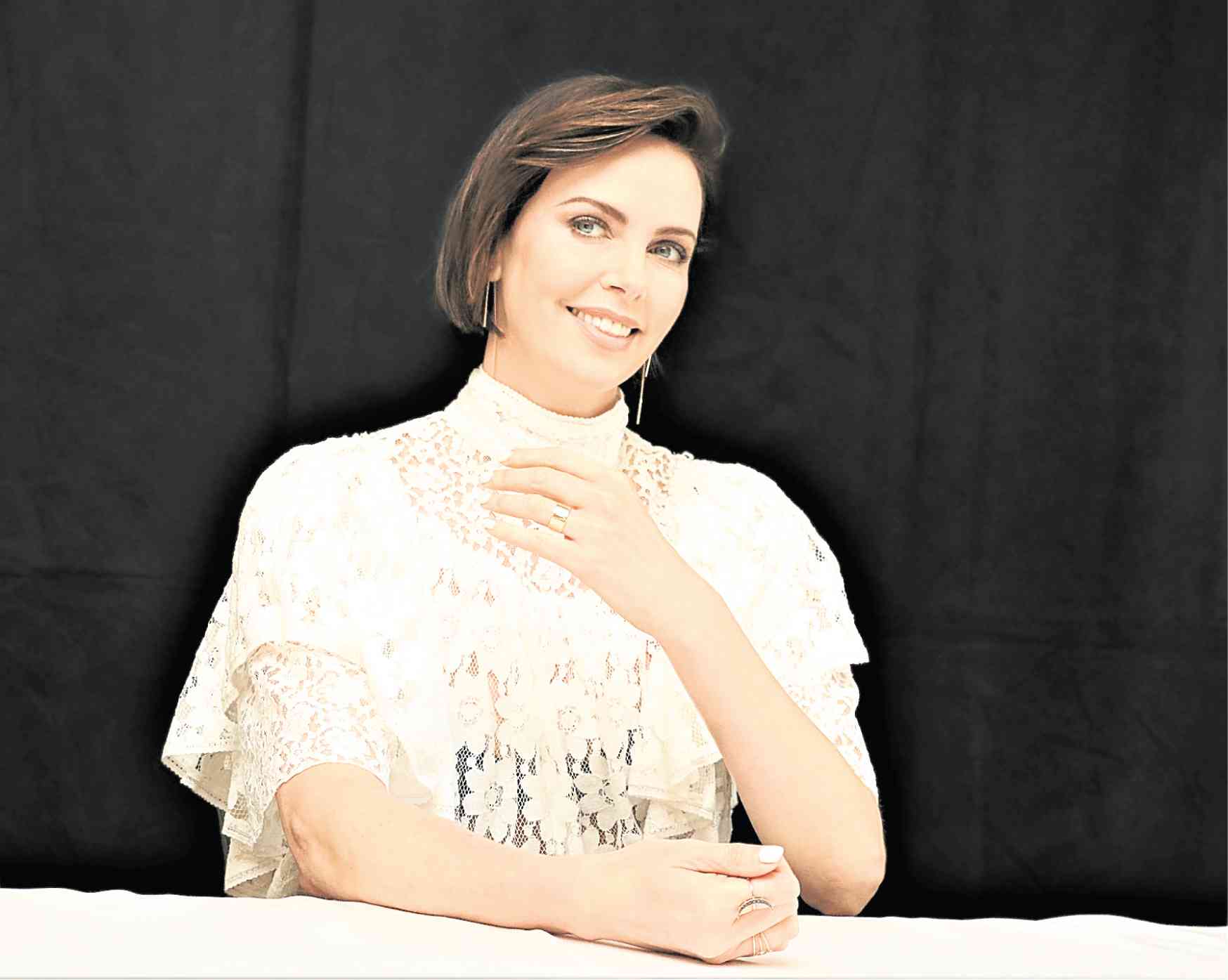 “I tried very hard when we were developing this film for Charlotte to want to be a real person women could see themselves in,” Charlize explained on how her character was a woman of our times. “For me, a modern woman isn’t a hard woman. She wants to be respected and appreciated for being feminine, but also doesn’t want to be made to feel like she isn’t capable.”

One of the most stunning actresses in cinema commented on the emphasis on attractiveness and yet beauty is often equated with superficiality: “I know it’s cliché. In many ways, my life was set up to be a narrative of beauty, getting into the modeling industry. I didn’t like that narrative.”

The actress added, “I have a complicated relationship with my beauty because it was almost everything that stood in the way of the thing that I really wanted.”

Speaking of her kids, when Charlize was asked how she was raising her adopted children—Jackson, 7, and August, 3—to bust gender stereotypes, she replied, “In answer to that, I actually have two daughters.”

Asked to clarify since Jackson was introduced as a boy when Charlize announced her adoption of a baby, she said, “I thought so, too, until she looked at me when she was 3 years old and said, ‘I’m not a boy.’ So, there you go. Obviously, I want to protect her privacy.”

On whether her mom Gerda still helps take care of the two kids, Charlize replied, “Yeah, very much. I couldn’t do it without her. I am so lucky to have her in my life.” Charlize and Gerda have remained very close, in a bond that intensified after that tragic home incident.

As she got emotional, Charlize laughed and quipped, “Let’s go back to politics!” It was the first time Charlize revealed that Jackson, who’s been seen wearing skirts and dresses, is a transgender.

On how the kids figure in her dating life, Charlize, now 43, explained, “With both of my kids, there was natural progression when they came into my life. I wanted to be a mom so badly that it was so all-consuming and I felt so satisfied. I wasn’t longing for anything else.

“Then, when your kids get a little older, your life opens up a little bit. I felt like, there’s all this other space now in my life where I can explore something else.

“I don’t think I ever enter any date, or dating situation, jumping that far ahead where I’m like, can I marry this guy, is he going to be with my kids and is my mom going to like him? I tend to treat it very much like, hey, let’s see if we get along and maybe you are a cool friend and, who knows, maybe this goes further.”