‘Hadestown’: Pleasurable trip to the Underworld 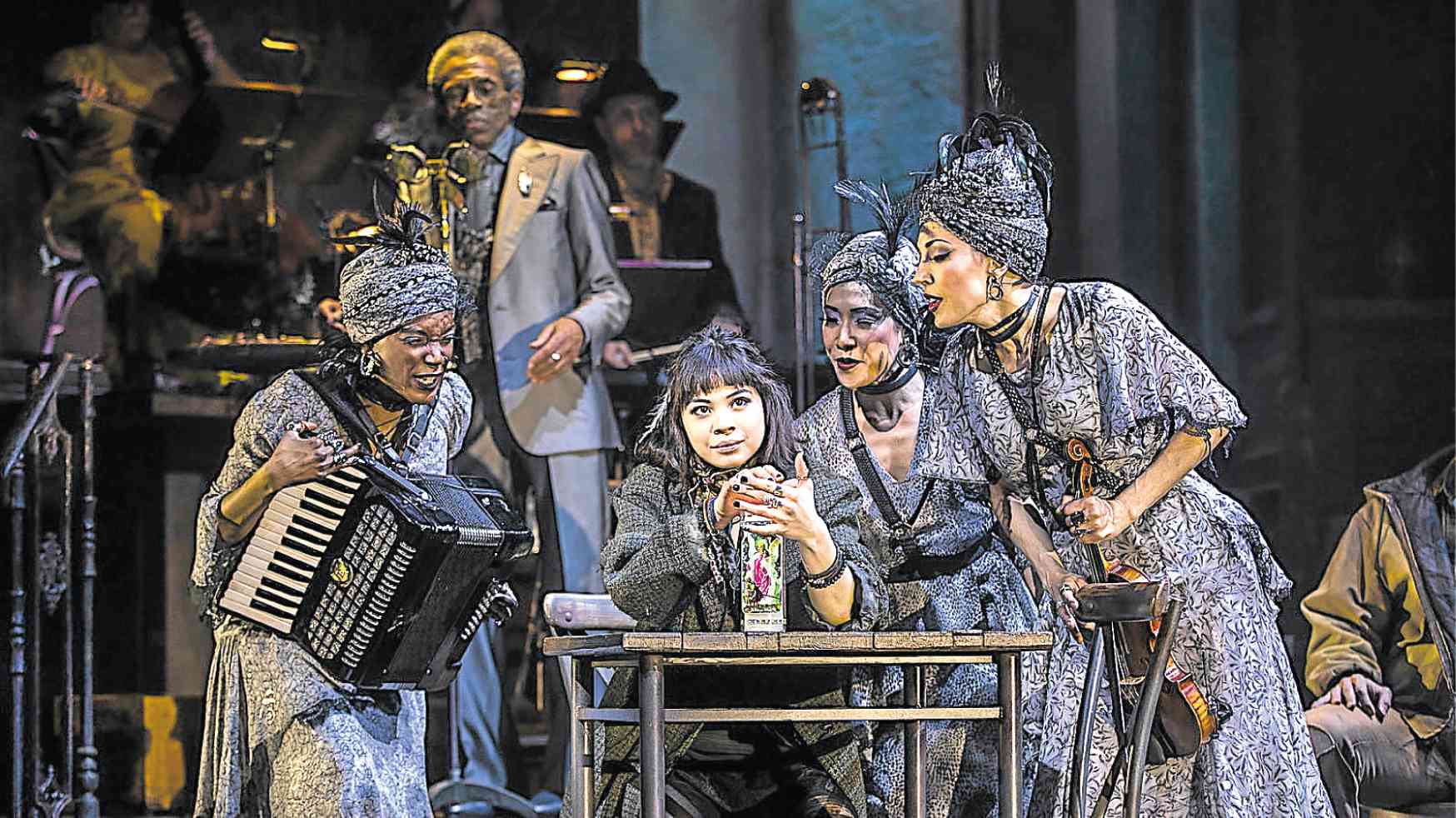 It is a story that kids in grade school know, whether taught via textbooks or oral tradition—the story of Orpheus and Eurydice. It is a Greek tragedy that has been told on text since 8 AD, and dramatized onstage and onscreen since the 1600s.

It has been the subject of paintings and sculptures, and was the basis for a 2010 concept folk album titled “Hadestown” by Anaïs Mitchell, which then became the basis for a brand-new Broadway show that just opened last Wednesday.

Set in what looks like postapocalyptic New Orleans, the musical is enjoying a critically acclaimed open-ended run at Walter Kerr Theatre. Starring Reeve Carney (“Spider-Man: Turn Off the Dark”) as Orpheus and Eva Noblezada (“Miss Saigon”) as Eurydice, the two lovers are now portrayed as a poor man and a starving woman.

With him unable to provide for her, she decides to descend to the depths of hell on the invitation of Hades (Patrick Page), who rules the Underworld with his wife, Persephone (Amber Gray).

Serving as our narrator is Greek god Hermes (Broadway legend André De Shields), guiding the action as it happens—and, as the Fates, those voices in the back of your mind, are Jewelle Blackman, Yvette Gonzalez-Nacer and Kay Trinidad.

The show begins with the actors and musicians entering the stage, breaking the fourth wall from the get-go. The playing space looks like a tavern, where we can all share in a drink. Once in position, the story begins, and we are then immersed in this unique world.

The story of Orpheus and Eurydice, as well as Hades and Persephone, stays true to the Greek originals, which means an audience member can arm oneself with the basic storyline (my daughter Nicole already knew how the lovers’ story would end).

There are no spoilers here, given that the tale is old and has been retold over the ages: Orpheus falls in love with Eurydice, she dies, and he follows her to hell to get her back. Hades allows them to leave, on the condition that Orpheus walks ahead, not once looking back to check on Eurydice until they are both in the light of the world above.

However, just as they’re about to reach the entrance, Orpheus, his initial bravado now replaced by very human doubt, turns to look back at Eurydice. She is then sucked back into the Underworld, never to be seen again.

The musical by Ms Mitchell, developed with and directed by Rachel Chavkin, with musical direction by Liam Robinson, choreography by David Neumann, scenic design by Rachel Hauck, costumes by Michael Krass, lighting by Bradley King and sound design by Nevin Steinberg and Jessica Paz, is a show unlike any other currently on Broadway.

It’s mostly sung through, with its few spoken lines reserved for poetry. The musicians are onstage (special mention to trombonist Brian Drye, who wails like nobody’s business), and are as much a part of the action as everyone and everything else, costumes included.

There is a pulse and an energy to all that takes place onstage, finding moments of quiet whenever it’s Orpheus’ time to sing, his voice and guitar casting a spell on every viewer who listens to him.

All five principals are reprising their roles from the pre-Broadway production at London’s National Theatre. Patrick makes for a deliciously menacing Hades, capable of evil, but possessing his own brand of mercy.

Amber’s Persephone is springtime steeped in alcohol, dancing and singing as if taken over by an otherworldly spirit. They are both mesmerizing and magnetic to watch, either by themselves or as a pair.

Reeve and Eva as the two young lovers have an electrifying chemistry when they’re together onstage (so much so that even my 12-year-old took notice, her jaw nearly hitting the ground), their voices blending together that, at times, one doesn’t know where he ends and she begins. His unique falsetto is also something to take note of.

On a side note, it is so satisfying watching Eva’s development from playing Kim in “Miss Saigon” to Eurydice in “Hadestown,” her prodigious talent and skill honed further by hard work, experience and life. There is a light that shines from within. She truly belongs on that stage.

As for André De Shields, the smallest gesture is enough to drive the entire theater crazy, his presence larger than life. And the three ladies who play the Fates are vocal powerhouses that are a pleasure to watch.

From the looks of this season, it already seems destined that “Hadestown” will run away with many awards. I am wishing this production only the greatest of successes, and will definitely make a return trip.

This is the only time a trip to the Underworld is a pleasure I cannot wait to take.