entertainment / Columns
Columns
Out there on her own 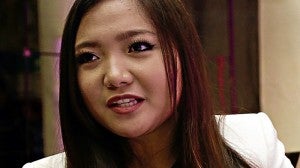 Living in the United States has taught Charice to be cautious about making professional decisions. Even with an international management team plotting out every career move, the 19-year-old Filipino pop star said she had to learn to speak up and express her own views.

“Lumawak ang pananaw ko [I have expanded my point of view],” Charice told the Inquirer in a recent interview.

She lives alone in West Los Angeles, in a house she purchased for herself. And she has bought a car, an Audi.

Being independent also means preparing her own meals: “I cook eggs and bacon [for breakfast] …  I search the Internet for Filipino food [recipes].”

But she often has to make do with coffee and soup, she admitted, especially when rushing to auditions three or four times a week.

She can heave a sigh of relief now, since her second album, “Infinity” (Warner), has been released. She recalled spending at least six hours in the studio regularly, sometimes longer (6 p.m. to 6 a.m.), which deprived her of sleep.

Her producer-mentor, David Foster, earlier told the Inquirer that he had allowed his ward to pursue her own musical direction without him. Even so, Charice said, “Lahat ng natutunan ko kay Sir David, ’yun pa rin ang in-apply ko sa second album (Everything I learned from Sir David, I still applied to my second album).”

The violent death of her estranged father, Ricky, has made her stronger, Charice said. She lightened up when asked what she remembered most about her dad: “We both hate black coffee … He takes a bath three times a day.  Mahilig siyang pumorma, like Carl [He loves to dress up, like my brother Carl].”

Charice is currently on an Asian tour to promote “Infinity” and is set to perform on March 9 at Smart Araneta Coliseum and on March 11 at Waterfront Cebu Hotel.

She will have her own live backup band. Her guest singers include British Virgin Islands R&B star Iyaz (who was featured on her hit single, “Pyramid”), the Madrigal siblings, and her colleagues from the “Little Big Star” talent search, Kyle, Gian, Makisig, Rhap Salazar and Sam Concepcion.

The Bloomfields will have two free shows: March 11, 7 p.m. at Venice Piazza, McKinley Hill in Taguig  and March 14, 7 p.m. at the Central Plaza of Eastwood City, Libis, Quezon City. The gigs will coincide with the band’s launch of a music video for its song “It’s Complicated.”

British band Orchestral Manoeuvres in the Dark (OMD) performs on March 12 at Smart Araneta Coliseum. Known for the 1980s hits “Enola Gay” and “If You Leave,” among others, OMD has reunited with its original members and released an album, 2010’s “History of Modern,” also the name of its current world tour.

March 17, 18
“The Legends and the Classics” featuring Lea Salonga, Cecile Licad and Lisa Macuja at the CCP Main Theater. Call 891-9999.