Maisie, Nikolaj and Sophie on the plot twists and zingers in ‘GoT’ season 8 premiere | Inquirer Entertainment
Close
menu
search

Maisie, Nikolaj and Sophie on the plot twists and zingers in ‘GoT’ season 8 premiere 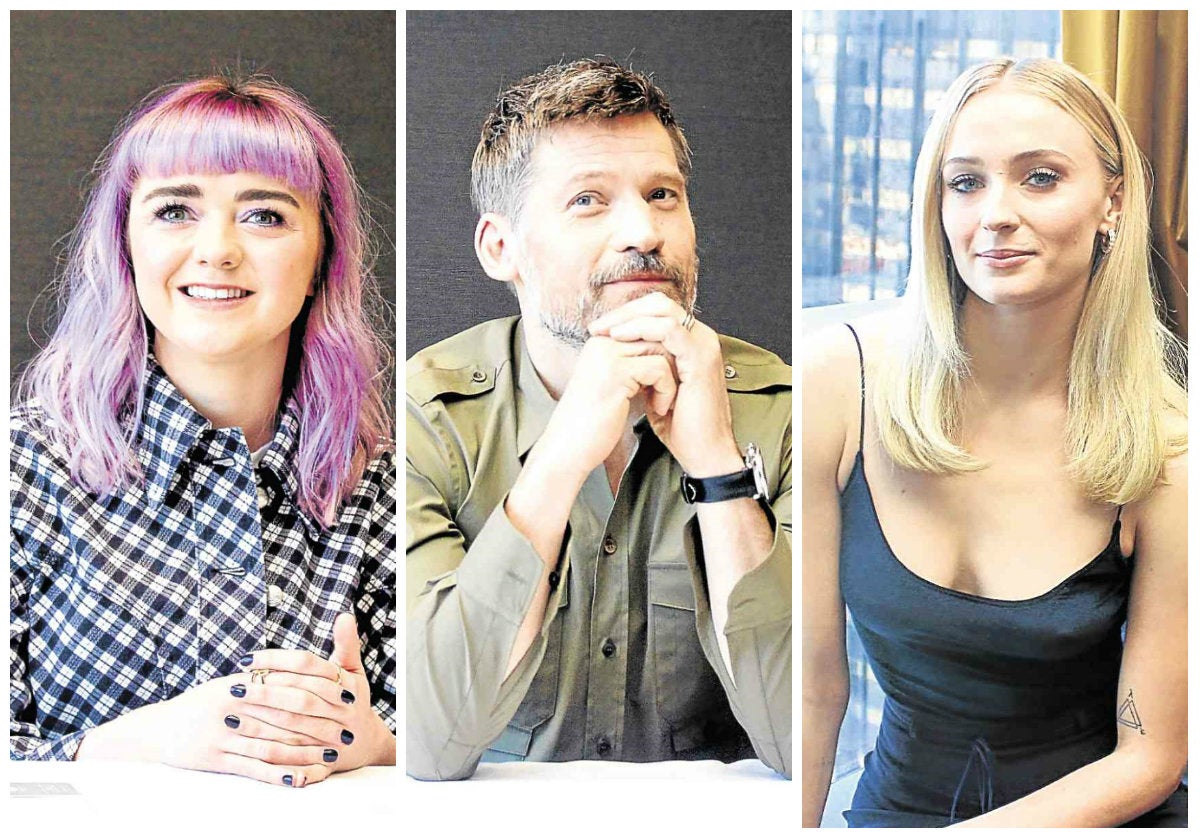 LOS ANGELES—Happy Easter! “Do not abandon yourselves to despair. We are the Easter people, and hallelujah is our song.”—Pope John Paul II

Spoiler alert! This entire column features spoilers about the first episode of the final season of “Game of Thrones.”

“How are you feeling? Did you stay out last night? So we’re in the same boat. That’s good,” said a grinning Nikolaj Coster-Waldau, aka Jaime Lannister in “Game of Thrones,” upon entering a room at the Mandarin Oriental New York.

Nikolaj was referring to the series’ premiere at the Radio City Music Hall and after-party at the Ziegfeld Ballroom the night before.

This morning, the Danish actor and the cast, including Maisie Williams and Sophie Turner, were up and about, ready to discuss the plot twists in the season opener.

“They’ve been very surprising,” admitted Nikolaj, who plays the knight with the golden hand, about the scripts when he sat down and read each of them for the first time every new season. “The thing about ‘Thrones’ is that you wrap up a season and I, like fans of the show, imagine what will happen next.

“So in my imagination, what happened at the end of Season 7, would have happened in the beginning. When Jaime comes back and his sister has done what she did, he’s going to say, ‘Enough is enough.’

“And the writers, because they’re cleverer than me, clearly stretched that out, so the payoff was so great at the end of Season 7. I think Jaime meeting Brienne is a surprise, but it’s one of those wonderful surprises that’s kind of expected. It’s a nice payoff.”

Added the actor who is married to former Miss Greenland Nukaka Motzfeldt, with whom he has two daughters: “It is why I’m proud of being part of the show and of (creators) Dan (Weiss) and David (Benioff) and writers Bryan (Cogman) and Dave (Hill). We have more of that in the show. That’s so cool because it’s one story; it just takes a long time to tell it.”

Asked about his character’s fate, the 48-year-old answered, “I don’t know if he’s doomed. I forgot the moment earlier in the episode when Bran is sitting there. I can’t remember who (it’s Sam) comes up to him and asks, ‘What are you doing here?’ And he says, ‘I’m waiting for an old friend.’ I thought, oh, sh*t.

“Clearly, Bran knows (Jaime is coming). What will happen? Is he going to spill the beans? This could very well be scene one of Episode 2, and you see Jon Snow swing the sword. I’m enjoying it.”

On that final scene in the premiere episode and its significance on Jaime going from villain (he pushed Bran, then a child, from a tower) to hero through the seasons, Nikolaj replied, “Not just that scene, but the whole thing. Hopefully, it will make the audience reflect.

“You look at those two characters and you can see that time has taken its toll, both on Jamie and Bran, who is no longer this innocent little kid. That does give you pause for reflection. I’ve always liked that character (Jaime), and I’ve always thought he was interesting because he’s very human.

“If you have kids and family, you can relate to Jaime insisting on doing whatever he can to protect the people he loves,” Nikolaj commented. “Obviously, he goes to extremes, but I never saw him as a villain. I just saw him as an honorable guy caught up in extreme circumstances, then caught up in this insane relationship with his sister. That has defined his life in many ways.”

On Jaime’s longevity in the phenomenal series, Nikolaj smiled as he answered, “It went from years where I just expected to not survive. I didn’t really worry about who’s going to end up on the throne. It was more like, I guess next year, I’ll find another job.”

Was he surprised by everything about the ending of the series finale, to be aired on May 19, which is an hour and 20 minutes long, directed by showrunners Benioff and Weiss?

“Some of it, but not all of it,” the actor replied. “I was really surprised, but it’s one of those nice surprises where it’s surprising but it makes sense. You go, oh, it’s clever. But it’s a good ending, I think (laughs). It’s easy to go to the spoilers.” 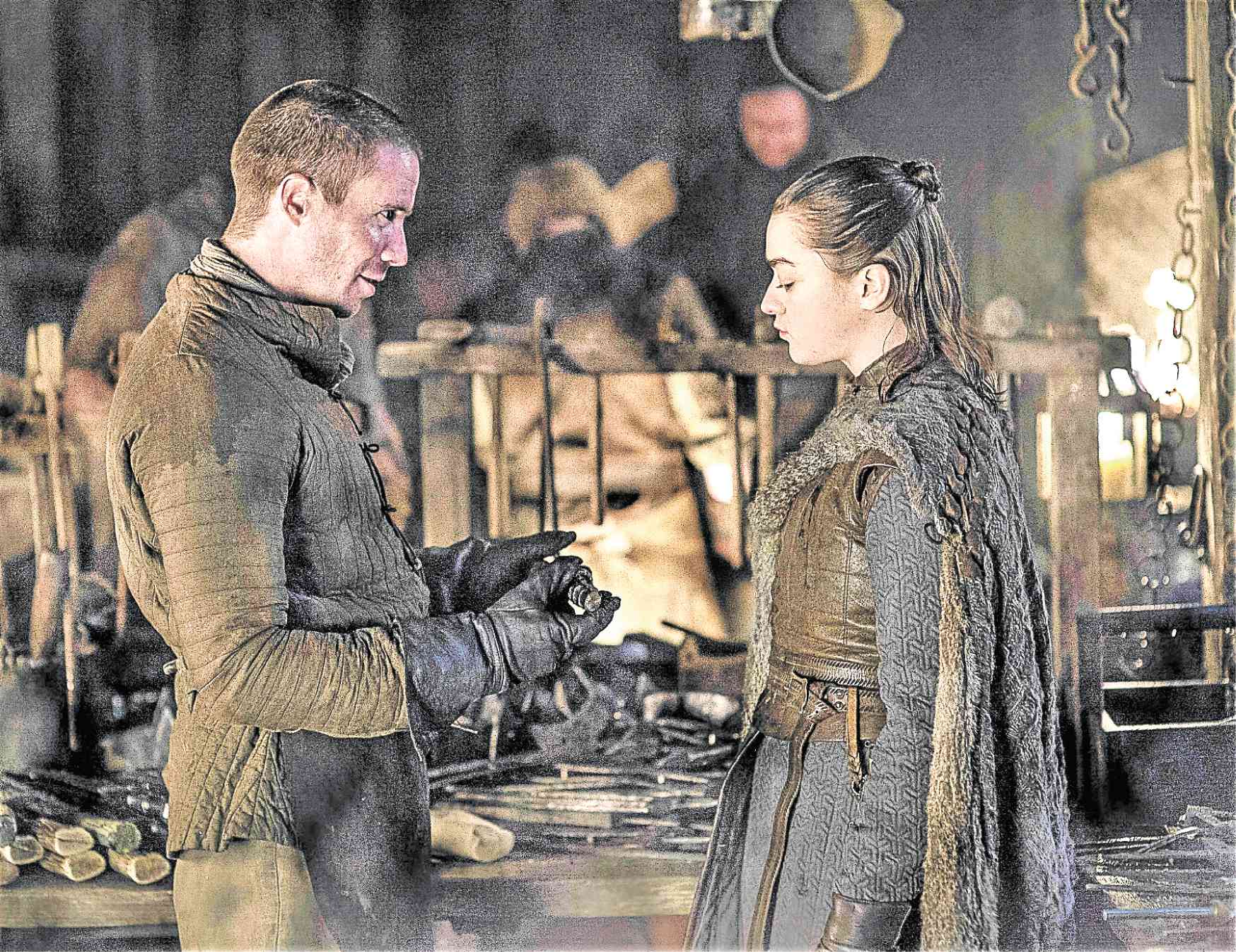 Sporting the purple hair that she debuted on the premiere’s red carpet, Maisie chatted about the feistiness of her Arya Stark, the younger daughter and third child of Lord Eddard “Ned” Stark and Lady Catelyn Stark.

The Bristol, UK-born actress said she relished playing the left-handed, headstrong woman who wields the Needle, a smallsword gift from Jon Snow, her half-brother. On her growth into a feisty Stark, who has a confrontation in the premiere episode with the Hound, whom she tried to kill, Maisie shared, “For what I have been doing with Arya in the most recent seasons up until this one, in terms of showing her having lost a sense of herself, it’s something that we saw a lot of when she was back with Sansa and in the cold.

“Moving into this season, I try to keep that up. But she is now being reminded so vividly of these previous relationships that she had before and the girl she was before. And it’s slowly bringing back the cheekiness, because I guess it was very cold. Arya has always made very cutting comments and that’s what I have always loved about her.”

The 22-year-old added, “Arya lost a lot of hope and spark. It was actually from a place of real sadness and pain. This season, with that particular interaction and with a few others, it’s still playing that line of being quite cheeky. But now, she’s having a lot more fun with it and just remembering the life she used to have and how important that was, too.” 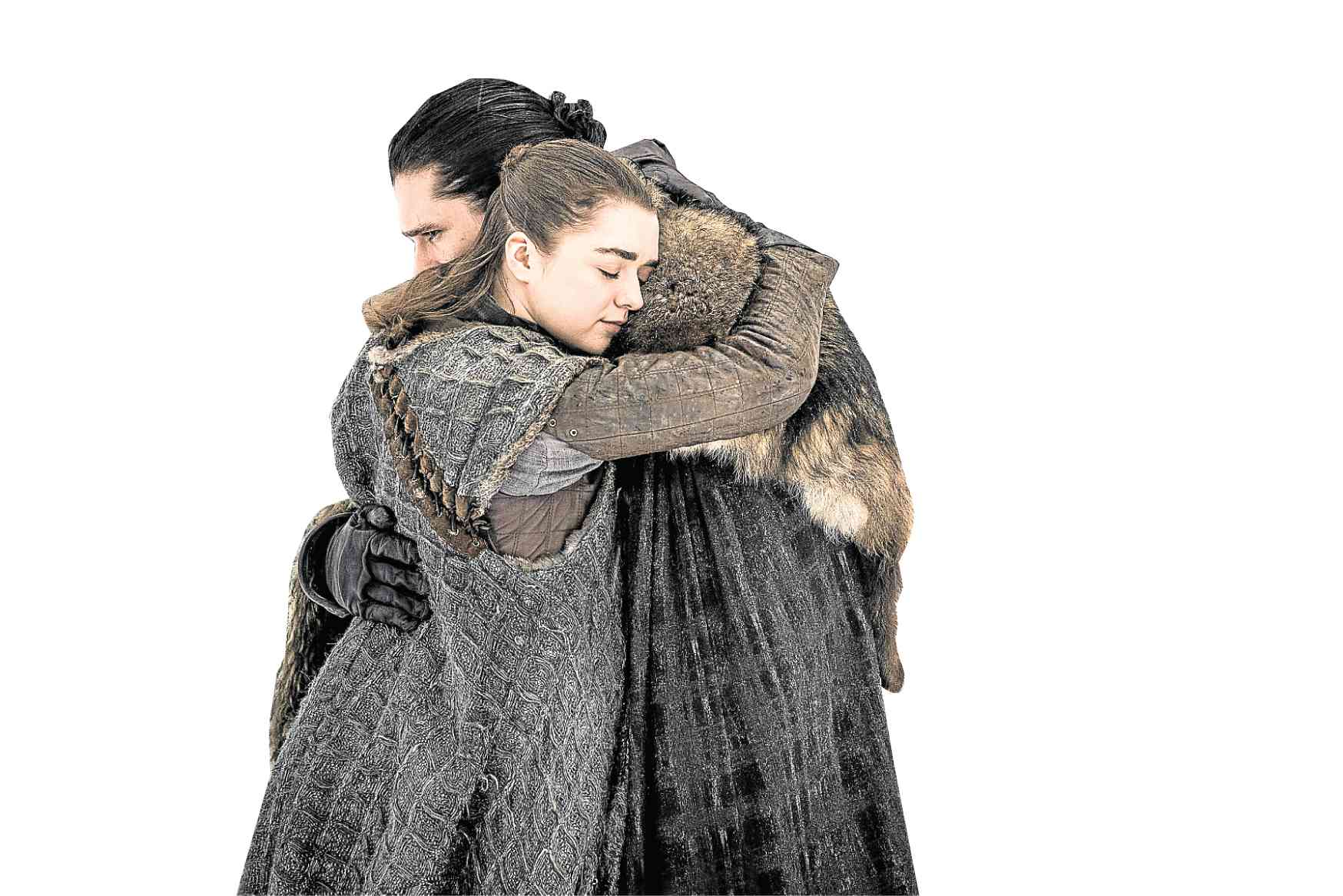 Williams (left) and Kit Harington in “Game of Thrones”

Portraying Arya’s sister, Sansa, Sophie Turner talked about her relationship to trust, especially surviving a series where one of the most shocking scenes, the beheading of her onscreen father, Ned Stark, was one she did not see coming.

“It’s interesting,” began the British actress who is engaged to Joe Jonas. “In my own life, I trust very few people. Not because I don’t warm up to people immediately, but I suppose if you’re in the public eye, you have to protect yourself a bit more. And so, all the people I trust are pretty much family and friends I’ve had since I was young.

Indeed. The cynic Sansa had some of the best moments and lines in the Season 8 premiere: “Winterfell is yours, your Grace” (delivered cold to Daenerys); (“What do dragons eat, anyway?” (also to Daenerys, who had a good reply, though: “Whatever they want”); and “Did you bend the knee to save the North, or because you love her (Daenerys)?” (to Jon, who was shaken).

“In the beginning, our stories were somewhat parallel in the way that we trusted when we were younger,” Sophie continued on the subject of trust in the show. “We trusted almost everyone we came into contact with. Sansa trusted Cersei, Joffrey and everyone. Now, she trusts only herself. And as I have grown up, I have learned to trust people less and less (laughs). Yeah, I think she is really the only one she can trust.”