Gina Rodriguez stars in Netflix’s ‘Someone Great’ — a review 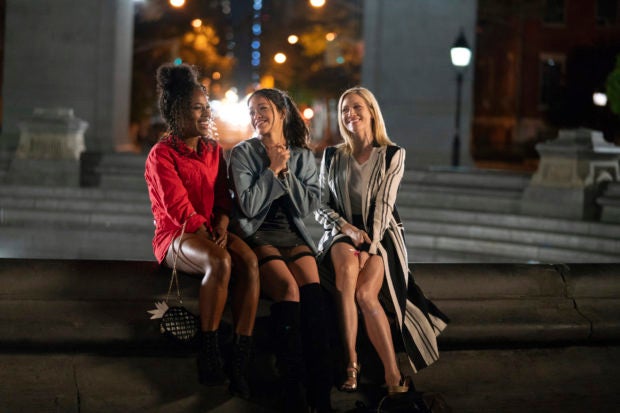 This image released by Netflix shows DeWanda Wise, from left, Gina Rodriguez and Brittany Snow in a scene from “Someone Great”. Image: Netflix/Sarah Shatz via AP

The romantic comedy, left for dead by most of the major studios, has been reborn on Netflix. Streaming algorithms have swooped in to resurrect an old genre formula.

The results so far — “To All the Boys I’ve Ever Loved Before”, ”The Incredible Jessica James”, ”Set It Up” — haven’t been the stuff of rom-com revolution, but they’ve been good reminders to the durability of the genre and, especially, the liberating room they afford actors.

Stale as they may have grown in the post-Nora Ephron period, romantic comedies were arguably the most natural vehicle for the likes of Katharine Hepburn and Cary Grant, not to mention Julia Roberts, Shirley MacLaine, Hugh Grant and Claudette Colbert. And in today’s movie era, the opportunities for performers to express their natural charisma, without the filter of a superhero costume, aren’t so many. These are much-needed star-making factories.

Enter the spirited and starry “Someone Great”, Netflix’s latest addition to the genre. Written and directed by Jennifer Kaytin Robinson (MTV’s “Sweet/Vicious”) and produced by Paul Feig, it stars Gina Rodriguez. A big part of its pleasure is the verve that Rodriguez and her co-stars — particularly DeWanda Wise and Brittany Snow, who play her best friends — bring to the film.

On the telenovela-based CW series “Jane the Virgin”, Rodriguez has already taken a rom-com set-up and expanded it in dynamic ways. “Someone Great” is easily the best big-screen view yet of Rodriguez, a forceful and vibrant actress of proud Puerto Rican heritage.

She plays Jenny, a New York aspiring music writer whose nine year relationship with her boyfriend Nate (an excellent Lakeith Stanfield) is ending. The impetus is a new job with Rolling Stone that will take Jenny to San Francisco, a move that Nate doesn’t want to make. Their entire relationship, from meeting to breakup, passes in a two-minute montage of texts, emails and Instagram posts. It’s a concise if dispiriting way to sum up a life together: a relationship as lived on social media.

Taking place in the acutely emotional days after their split, “Someone Great” is about passing through that anguished crucible of heartbreak. Everywhere prompts a flashback: a Vampire Weekend song, a meaningful spot in Washington Square Park. Erin (Wise) and Blair (Snow) come to Jenny’s rescue, joining her for an odyssey around New York (RuPaul, Rosario Dawson, Questlove and Jaboukie Young-White make cameos) that concludes with a concert that Nate is believed to be attending, too.

As you can tell, “Someone Great” has not exactly rewritten the rom-com rule book. Where it distinguishes itself is in the fresh faces of it cast (the rom-com is not known as the most diverse of genres) and in focusing on the hard realities of breakup rather than the fairytale of falling in love. While Blair (recklessly breaking free of a staid relationship) and Erin (battling her reluctance to commit to her girlfriend) bear plenty of the usual hallmarks of the usual gal-pal supporting players, they’re given a bit more story in “Someone Great”, a movie ultimately about three women growing into their 30s by leaning on each other.

What “Someone Great” is missing is anything that punctures its rom-com bubble. At no point is there any doubt that the power of friendship will triumph. Neither Erin, Blair nor Jenny (whose occupation is invisible despite its prominence in the story line) have any real questions to ask themselves. They are all urged along supportively by Robinson. “Someone Great” may be too self-satisfied to test itself.

The few times the film does dare satire, it’s better. As their sketchy ticket hookup with a dog named Barbra Streisand, Young-White uses the language of #MeToo to hit on the three women. “I truly believe time is up,” he says, brightly. “As a matter of fact, time been up. I loved ‘Lady Bird.'”

“Someone Great”, a Netflix release, is rated R by the Motion Picture Association of America for drug content, drinking, sexual material and language throughout. Running time: 92 minutes. Two stars out of four. CC