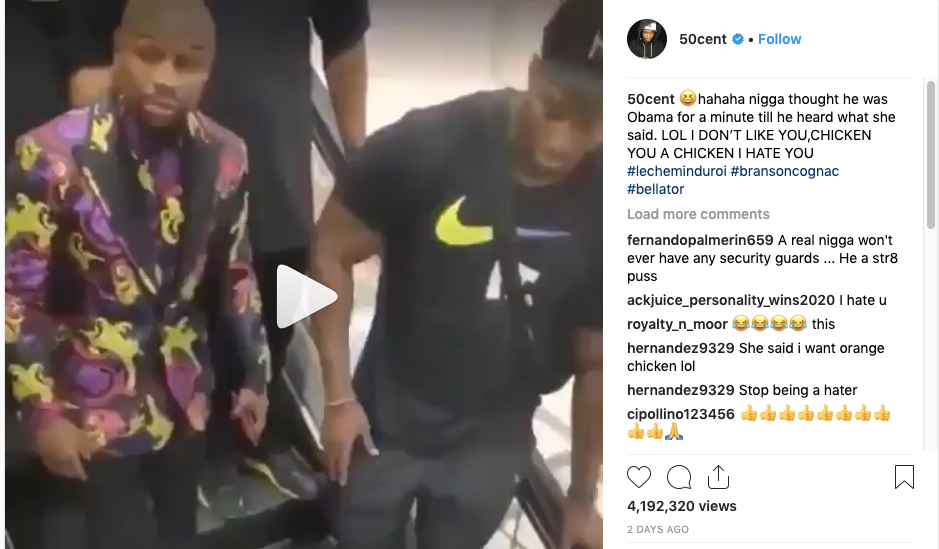 50 Cent took to Instagram where he re-posted a video of Mayweather waving at his fans when a lady shouted “I don’t like you! Chicken! You are chicken! I hate you.”

“Hahaha nigga thought he was Obama for a minute till he heard what she said. LOL I DON’T LIKE YOU,CHICKEN YOU A CHICKEN I HATE YOU #lecheminduroi #bransoncognac #bellator,” 50 cent said in his Instagram post.

😆hahaha nigga thought he was Obama for a minute till he heard what she said. LOL I DON’T LIKE YOU,CHICKEN YOU A CHICKEN I HATE YOU #lecheminduroi #bransoncognac #bellator

The video re-posted by the American rap artist now has more than 4.1 million views and more than 43,100 comments.

It was not clear, however, where and when the incident happened but it could be recalled that Mayweather Jr. arrived in the Philippines on March 31, at 3:30 a.m. This same video had been making the rounds on social media during the time when Mayweather Jr. was visiting the country.

He stayed in Manila for less than five hours before he flew straight to Boracay at 7 a.m. /jpv

READ: Floyd Mayweather Jr. is living it up in the Philippines