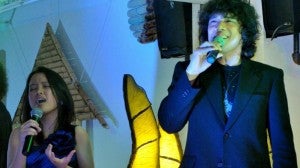 When the wrong instrumental for her tribute to the legendary Etta James was played, the 14-year-old put on her trouper hat and offered to sing “At Last” a cappella to a captivated crowd that included
Joseph Francia, vice president of GMA Network in the Philippines.

“She’s determined and focused and as long as she persists in her ambition to make it, she’ll go a long way,” Francia said.

She engaged the crowd of nearly a hundred with her powerful and soulful voice with songs from various genres. Songs such as Adelle’s “Chasing Pavements” and Martin Nievera’s “Ikaw Ang Aking Pangarap”
have one way or another “spoken to me,” she said. “I chose to sing them not because they’re good or popular. They have special meanings to me.”

“Kirby’s confidence in herself as a talent has soared higher and there is no stopping her,” observed Myrna Gutierrez, producer of Queens Asian Fest.

Partnering with Kirby for this appearance was the Philippines’ Prince of Pop-Opera Jonathan Badon.

From Bocelli’s “Torna a Surriento” to West Side Story’s “Tonight” and Freddie Aguilar’s “Anak,” Badon was a force of nature. His precise pitch, warmth and clarity in his voice couldn’t begin to describe his
flawless performance whether at Carnegie Hall or Payag Restaurant, the evening’s show venue.

Jonathan’s the “Phantom” medley cast a hypnotic spell on the audience, as did his interpretation of the “The Prayer.” Everyone was quiet, you could hear a table napkin drop on the floor.

Organized by Dr. Luis Guillen in cooperation with Tofa, Queens Asian Fest and MP Productions of Marisse Panlilio, the show was meant to welcome back Badon in the Big Apple and celebrate Asunto’s road to stardom as she signed a singing contract with “world’s greatest boxer.” Kirby was personally handpicked by Congressman Manny Pacquiao to sing the Philippine national anthem on June 9 in Las Vegas before his fight with Timothy Bradley.

For those who missed the show, Kirby and Jonathan will be back March 10 at the Philippine Center where they will be joined by other artists.