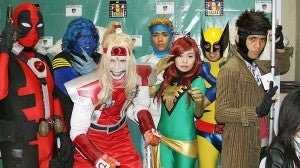 MANILA, Philippines – They started out as a group of 40 vendors occupying a small space in a mall 10 years ago doing what they loved the most – exhibiting and, at times, swapping or selling collectible toy memorabilia gathered from movies and games.

And now, 10 years after, this group of toy hobbyists who call themselves the Collectible Unlimited has grown. From the Toy Convention it began in 2002, the group will now play host to the Asia Cosplay Meet Philippines (ACMP) competition to be held on June 18 and 19 at the SM Megatrade halls 1, 2 and 3 from 10 a.m. to 9 p.m.

The winner of the ACMP contest will go to Singapore for the Asia Cosplay Meet Finals, said Cholo Malilin, one of the Toycon founders.

“We started with only 40 vendors,” said Malilin.

“Now, we have a much bigger event because we’re using all the three 250-square meter trade halls,” Malilin said, referring to the SM Mega trade halls which he said they have been using for the last six years.

“A lot people attend the convention every year, so we decided to use all the three halls this year,” he added.

Aside from the Cosplay competition, Vic Yap, another Toycon founder, said the event would also be one of the backdrops for the Chinese feature film, “Cosplay Nation,” to star Linda Le, Cheng Yi, and Filipina Aloida Gosiengfiao and would be about identity and cultural differences.

“Toycon celebrates the best of all worlds as cosplay goes cinematic,” said Malilin.

“Only 20 foreign films are shown in China each year, so we are very proud about this,” Yap said.

Among the toys, memorabilia, costumes on display are those from the movies, “The Green Lantern,” “Transformers,” “Captain America,” and “Harry Potter.”