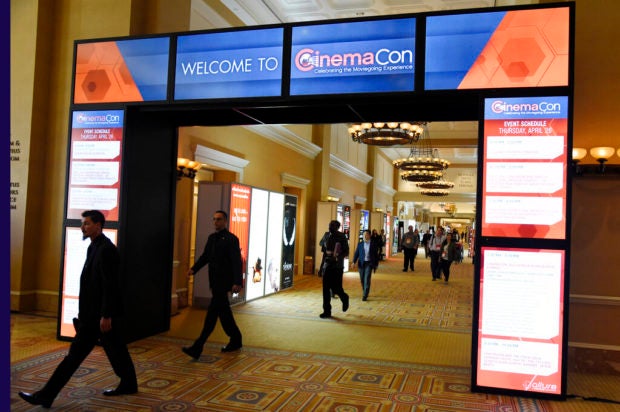 FILE – This April 26, 2018, file photo shows CinemaCon attendees walking through the lobby during CinemaCon 2018 in Las Vegas, the official convention of the National Association of Theatre Owners. The movie industry, everyone from the Hollywood studios that produce the films to the companies that make the screens, speakers and seats in theaters, are descending on Las Vegas this week for CinemaCon. Image: Chris Pizzello/Invision/AP, File

LAS VEGAS — The movie industry — everyone from the Hollywood studios that produce the films to the companies that make the screens, speakers and seats in theaters — are descending on Las Vegas this week for CinemaCon. The future of film going will be in the spotlight as the annual trade show kicks off Monday at Caesar’s Palace.

There will surely be much celebration and self-congratulation for the record 2018 box office year, which exceeded $11.8 billion in ticket sales in North America, and recent successes like “Us” and “Captain Marvel.” Yet this year’s CinemaCon is coming at a time of great change in Hollywood. Streaming and how long movies play in theaters have been a conversation staple at CinemaCon in recent years, but Walt Disney Co.’s just-completed acquisition of 20th Century Fox will be the elephant in the room.

“People are really wondering what this consolidation is going to look like for the entire business,” said Kevin Grayson, the president of domestic distribution for STX Films.

On a practical level, it means there won’t be a separate presentation from Fox, which always staged an elaborate production, usually involving its former distribution chief in some kind of costume.

“We will absolutely miss the Fox presence, but we also need to support and embrace Disney for what they bring to our industry and what they’re going to look to do to further bolster the distribution line of great product,” said Mitch Neuhauser, the managing director of CinemaCon. “It’s going to be a very bittersweet convention. But we will change with the times and move forward in a productive way.”

In other words, the show must go on. Disney, which has been the market-leader for three years running, along with three of the other major studios, Universal, Warner Bros. and Paramount (Sony is sitting this year out), will come armed with splashy new footage, trailers and some of their biggest stars to hype their slates for the summer movie season and beyond to an audience of theater owners, from the biggest chains to the smallest mom and pop shops.

It’s not just the biggest studios: Lionsgate, Amazon, Neon and STX Entertainment will also be present, with some showing sneak peeks of upcoming films like “Wild Rose,” ”Late Night” and “Long Shot.”

STX will kick off the main studio presentations Tuesday morning after a few remarks on the state of the industry.
“It really gives us that opportunity to shine a light on STX and show that we are not here for the short term, we are here for the long term,” said STX’s Grayson.

STX specializes in mid-range and mid-budgeted commercial films like “The Upside” and “Second Act,” and CinemaCon is an essential space to interact with not only the big players in exhibition but the people who own “twins and triples” in the middle of the country that are just as essential to their business.

“We’re releasing 10 to 12 films this year and 12 to 15 next year, “Grayson said. “So when the other studios are making the tentpoles, it allows us to fill that gap. ”

Outside of the main theater, there will also be a whole world on the trade exhibition floor showing the latest and greatest in everything from theater technologies to concession snacks.

“There has been a non-stop momentum of new technology that is driving the industry,” said Neuhauser.

Ray Nutt, the CEO of Fathom Events, which specializes in event cinema, from classic movies to the Metropolitan Opera and even sporting events, agrees.

“That box office record doesn’t just happen because there’s good content out there,” Nutt said. “It happens because the amenities in the theaters are awesome these days, whether it’s luxury seating or enhanced food and beverage. These are all things that make going to the movie theater special and one of a kind.”

Julien Marcel, the CEO of Webedia Movies Pro, a tech and data company for the theatrical industry, predicts that there will also be much discussion over the “second digital revolution” in movie going.

Marcel’s company recently published a study that said there was 18.7 percent growth in online ticket sales in 2018.

Movie tickets purchased online currently makeup about a quarter of all ticket sales.

He also expects there to be a lot of focus on the “subscription economy.” MoviePass might be struggling, but AMC and Cinemark have found successes with their own models and more companies are gearing up to do the same.
And even with all the changes afoot, the mood as ever going into CinemaCon is optimism.

“I’ve been around this business for 30 years now and it was always something that was coming along whether it was cable television or the VCR that was going to kill the industry,” said Nutt. “But people in this industry keep innovating in different ways to keep people coming back out to the theater to have that communal experience. It’s pretty gratifying to see the resiliency of the industry.”

Disney and Warner Bros. go head to head at CinemaCon