Backstreet Boys to return to Manila in October 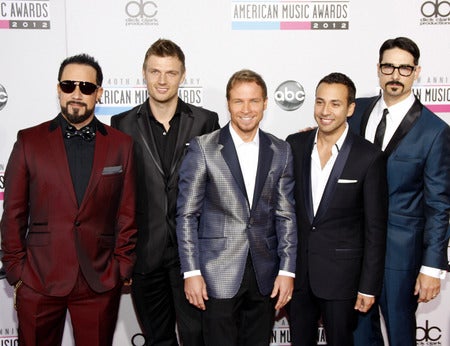 The Backstreet Boys at the 40th anniversary of the American Music awards held at the Nokia Theatre, Los Angeles. INQUIRER STOCK PHOTO

The boy band announced the news in a Twitter post on Tuesday: “Asia! We heard you. We are so excited to bring the#DNAWorldTour to you this October! Visit http://BackstreetBoys.com  for more info.”

Asia! We heard you ✌🏻We are so excited to bring the #DNAWorldTour to you this October! Visit https://t.co/4zEQvQJWRv for more info 🧬 pic.twitter.com/9DKbAtHFM7

The venue and ticketing details of the concert have yet to be announced.

The Backstreet Boys last performed for their Filipino fans at the Mall of Asia (MOA) Arena in May 2015.

The group consisting of Brian Littrell, Nick Carter, AJ McLean, Kevin Richardson, and Howie Dorough rose to fame with their hits “Quit Playing Games,” “As Long As You Love Me,” “I Want It That Way,” among others. /jpv