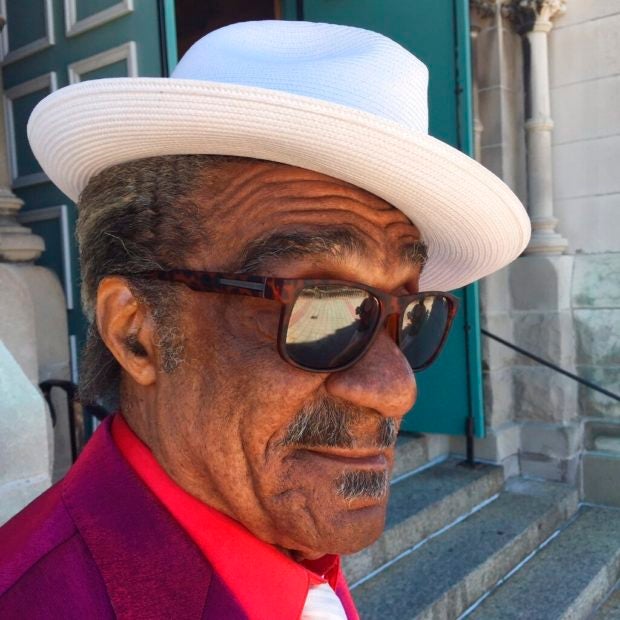 R&B singer and songwriter Andre Williams died Sunday at age 82. Williams co-wrote “Shake A Tail Feather.” He moved as a young man from Alabama to Detroit, where he signed with Fortune Records and, later, with Motown Records. His early hits also included “Bacon Fat” and ”Jail Bait.” Williams’ manager and musical director, Kenn Goodman, said Monday, March 18, 2019, that Williams was recently diagnosed with colon cancer and that he was receiving hospice care at a Chicago nursing home. Image: Kenn Goodman/Pravda Records Archive via AP

DETROIT  — Andre Williams, an R&B singer and songwriter who co-wrote “Shake A Tail Feather” and performed across musical genres, died. He was 82.

Williams’ manager and musical director, Kenn Goodman, said that Williams was recently diagnosed with colon cancer and that he was receiving hospice care at a Chicago nursing home when he died Sunday.

Williams moved as a young man from Alabama to Detroit, where he signed with Fortune Records and, later, with Motown Records. His early hits included “Bacon Fat,” ”Jail Bait” and “Shake a Tail Feather,” which Ray Charles sang in “The Blues Brothers.” Williams also produced the recording of “Mustang Sally” by its composer, “Sir” Mack Rice.

Goodman said Williams worked off and on for Motown, depending on how he and company founder Berry Gordy Jr. were getting along. Williams was a producer, songwriter and talent scout, collaborating early on with Stevie Wonder.
Goodman, who owns Chicago label Pravda Records and who played music and had business dealings with Williams over nearly two decades, said Williams’ musical contributions were “massive” and spanned soul, punk, rap, garage rock and country.

“There wasn’t anything he wouldn’t tackle and be 100 percent into — endlessly in the studio, endlessly on the road, endlessly performing,” said Goodman, who in years past would play with Williams on many tours across Europe — “his biggest fan base.”

Goodman said Williams had his demons, describing him as a longtime alcoholic who ultimately got sober. Williams suffered a series of strokes that kept him from touring after 2013, but Goodman said he could still be counted on for guest spots during gigs in his adopted hometown of Chicago.

“He was a survivor, he was a hustler,” Goodman said, recalling his friend’s penchant for wearing three-piece suits everywhere, including fast-food joints. “He knew how to get onstage every night, no matter what condition he was in every day. He was magic.”

Goodman said Williams will be the subject of a documentary that will explore his later years. A tribute concert also is planned for next month in Chicago. MKH