Sam Smith has revealed that he is non-binary, identifying as neither male or female.

He came out on actress Jameela Jamil’s Instagram show “I Weigh” where he discussed his body image and his sexuality.

The Grammy Award-winning artist said he had long been conflicted by his body and mind.

He stated that he has felt insecure about his body for looking feminine and that this sent him on the path to learn more about his sexuality.

“I am feminine in many ways and I’ve always resented that,” he said. “I put on weight in places women put on weight.”

He said this led him to get liposuction at 12 because he was gaining weight on his chest and was bullied for having “man boobs.”

The aha moment of his gender identity came when he encountered discussions about being non-binary, which are used to indicate one who does not identify as a man or woman.

“I’m not male or female, I think I flow somewhere in between. It’s all on the spectrum,” he said, referring to the SOGIE (sexual orientation, gender identity and expression) spectrum.

Previously, Smith said of his sexuality on The Sunday Times in 2017, “I don’t know what the title would be, but I feel just as much woman as I am man.”

Gender is fluid, with some explaining that it falls into a spectrum. Gender identity refers to how one feels on the inside, as seen in this infographic from a United States LGBTQ suicide prevention organization, The Trevor Project. 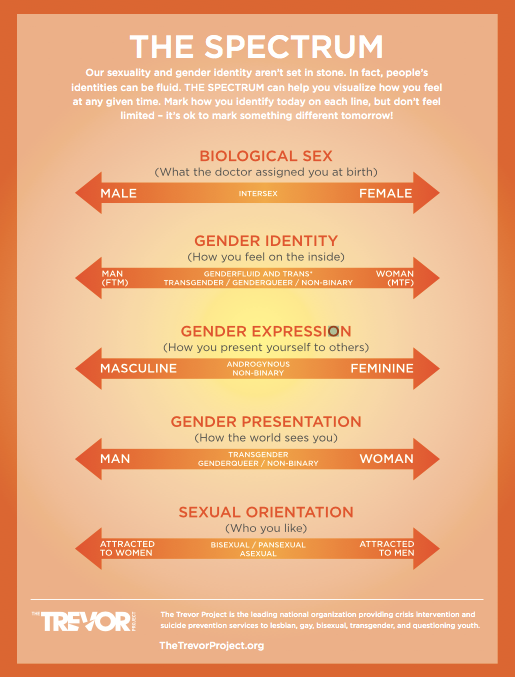 On the opposite ends of the gender identity spectrum are man and woman. Those who feel they are not exclusively masculine or feminine identify as non-binary or the catch-all term genderqueer.

Sexual orientation refers to the sex/es one is attracted to, while gender expression is how one presents themselves, which could be masculine, feminine, or neither.

Smith has not said much of his sexual orientation or people that he is attracted to, though he has dated men, some who said even identify as heterosexuals. He said in “I Weigh” that he falls in love with “people, not genitals.” Niña V. Guno/JB

Sam Smith goes shirtless as he opens up about ‘starving’ before photo shoots, fighting body issues