NEW YORK — This season of “The Bachelor” may have begun with 30 women competing for Colton Underwood’s heart but the season was turned upside down when front-runner Cassie Randolph bowed out of the competition as it was nearing its end. 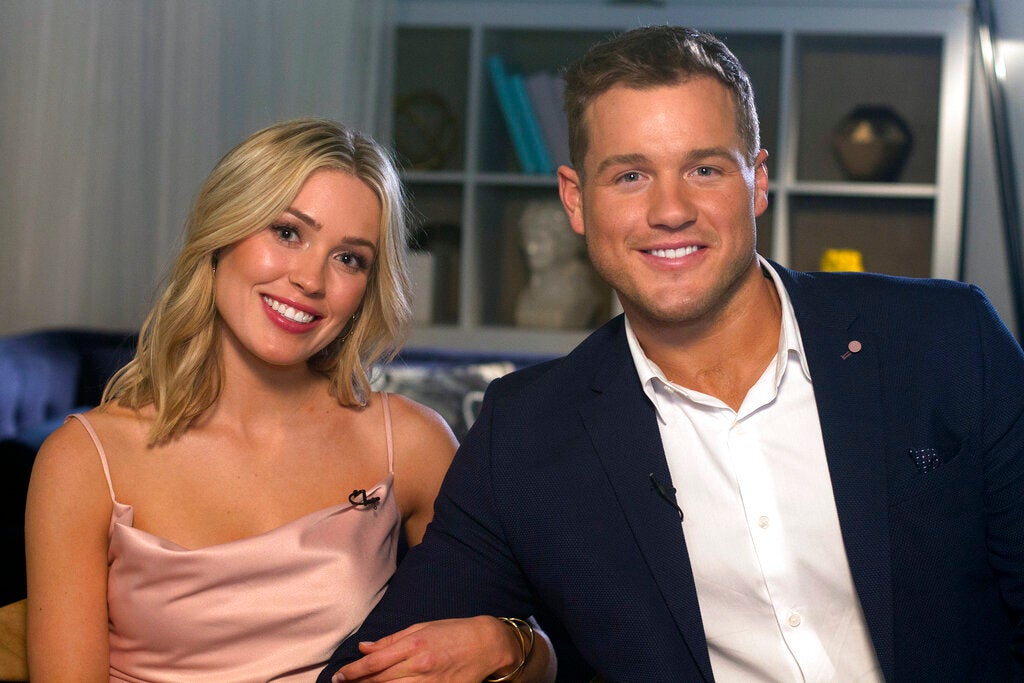 Suddenly the hunted became the hunter, with Underwood telling the other two remaining women they were out, and he was going to try to change Randolph’s mind.

“It was her ‘Bachelorette’ moment when I had to go and ask for her back,” said Underwood.

His efforts worked out, Randolph took him back in the show’s dramatic finale this week, though there was no proposal, atypical of “Bachelor” endings.

The two are now just enjoying their time as a couple. They spoke to The Associated Press about the show, intimacy and that infamous fence jump.

AP: This season, the premise of the show was inadvertently flipped. Generally, the contestants don’t know how “The Bachelor” feels about them but this time you didn’t know how Cassie felt about you.

Underwood: I always said with Cassie, that was the most I ever felt loved. Although I wasn’t hearing it, which was a challenge of mine because, you know, you always want to hear it.

Randolph: I didn’t realize that I was being so awful at articulating how I felt. When I was watching it back, I was like I want to jump in the screen right now and like, “Just say this, Cassie. This makes more sense or he’ll get this.” … I think it kind of scared me a little bit to verbalize things but I knew how I felt and I felt like I was showing it, which obviously he said he felt.

AP: There was the theme of you (Colton) being a virgin that the show and ABC really promoted that angle. (Host) Chris Harrison asked you about it in the finale, but can you clear up if you’re still a virgin?

Underwood: No, I didn’t mean it like that. (laughs) I’m saying “No, I’m not going to clear it up.” I’m gonna leave it to everybody to make up their own opinions and whatever, but I’m going to remain sort of quiet on that now. It’s between us and one of those things I’m taking a step back and I feel like I have been very open in regards to my virginity. Now that there’s two people in it, I feel like it’s best for us to keep that part of our relationship private.

AP: What would you say to fans who might say they’ve been following this “virgin” storyline the entire season and don’t think it’s fair you’re being quiet about it now?

Randolph: That’s not why he really came into this thing. It wasn’t to lose his virginity, so it’s a little unfair for fans to say that, I think. I think it’s something that he shared openly with everyone and now it’s just—it was a little bit taken advantage of, so we’re closing that door.

AP: Cassie, on the show, you said you weren’t sure if you were ready for the type of commitment Colton wanted. When did you know? Was it during filming or possibly after the cameras went away?

Randolph: I think during filming and in the end right there, it was just really overwhelming and there were a lot things going on. I mean, essentially the entire show took a turn that no one’s ever really done before. I didn’t really know how to navigate that. But I was conflicted because I really genuinely loved and cared about him. But I just haven’t had enough time to get to making a lifelong commitment yet. And I think after the show, when all the pressure went away … I was really able to listen to my feelings and know that they were real because I was still feeling them. And that’s kind of when I realized that this is good. This is real.

AP: The much-hyped jump over the tall white fence may go down as one of the top moments in reality TV.

Underwood: That was my first fence jump. I will say adrenaline played a huge factor into that. I actually joke about it. I was like, “Man, I’ve trained 17 years for the NFL—forget that. I trained 17 years to jump that fence!” That was my shining moment, I guess. It was just one of those things were emotions were running high and I would do whatever to jump that fence. I’m just very glad I did it and didn’t fall on my (expletive).

AP: What would’ve happened if you didn’t make it?

Underwood: Well, you know they would’ve played it over and over again. I probably would’ve just tried to find the button to open the gate. That would’ve been the smarter thing to do in the first place.

AP: If I go to the gym are there any exercises that can get me ready to jump a fence?

Underwood: Some pull-ups, some pushups—probably some squats to get a little lower body strength. And you got to do some yoga too, because you gotta get those hips and legs over that fence. NVG

The new Bachelor is a virgin, so what?