MANILA, Philippines — Andi Eigenmann did not mince words at those who made assumptions about Ellie over her short hair.

Eigenmann, in an Instagram post on Wednesday, clapped back at people who assumed that Ellie’s short hair has something to do with her gender identity.

“Been receiving so much comments from strangers asking me what happened to Ellie’s hair, assuming that it has something to do with her gender identity, or simply telling me how much of a waste it was to cut her hair of because ‘she was so beautiful,’” Eigenmann wrote.

Eigenmann’s post was accompanied with Ellie’s photo sporting short hair and a baseball cap, sharing how her daughter “discovered a new fashion staple for herself.”

The actress emphasized that Ellie was still beautiful regardless of the length of her hair.

“My daughter STILL IS beautiful, and no matter how much she will change through time, she always will be. Because it was never her long hair that made her look good,” Eigenmann said.

While she recognizes that everyone is entitled to their own opinion, Eigenmann said she was saddened by “how people (specially other women) are making me feel like Ellie cannot feel or be beautiful just because of her hair.”

As a mother, Eigenmann said she was scared about raising Ellie around people who think this way.

“I am trying to raise a child that is comfortable in her own skin. That is confident in being true to who she is, regardless of what others may think. As a mother though, it gets scary for me to raise my child around people who think this way,” Eigenmann said.

She ended her post saying, “Why can’t we just learn to support and encourage other women to be confident, and strong, and to stay true to who they are, rather than bringing them down for being this way? Whoever said that there is a hair length requirement for beauty? They’re bonkers.”

In an Instagram story also posted on Wednesday, Eigenmann further lamented those who give comments about Ellie. 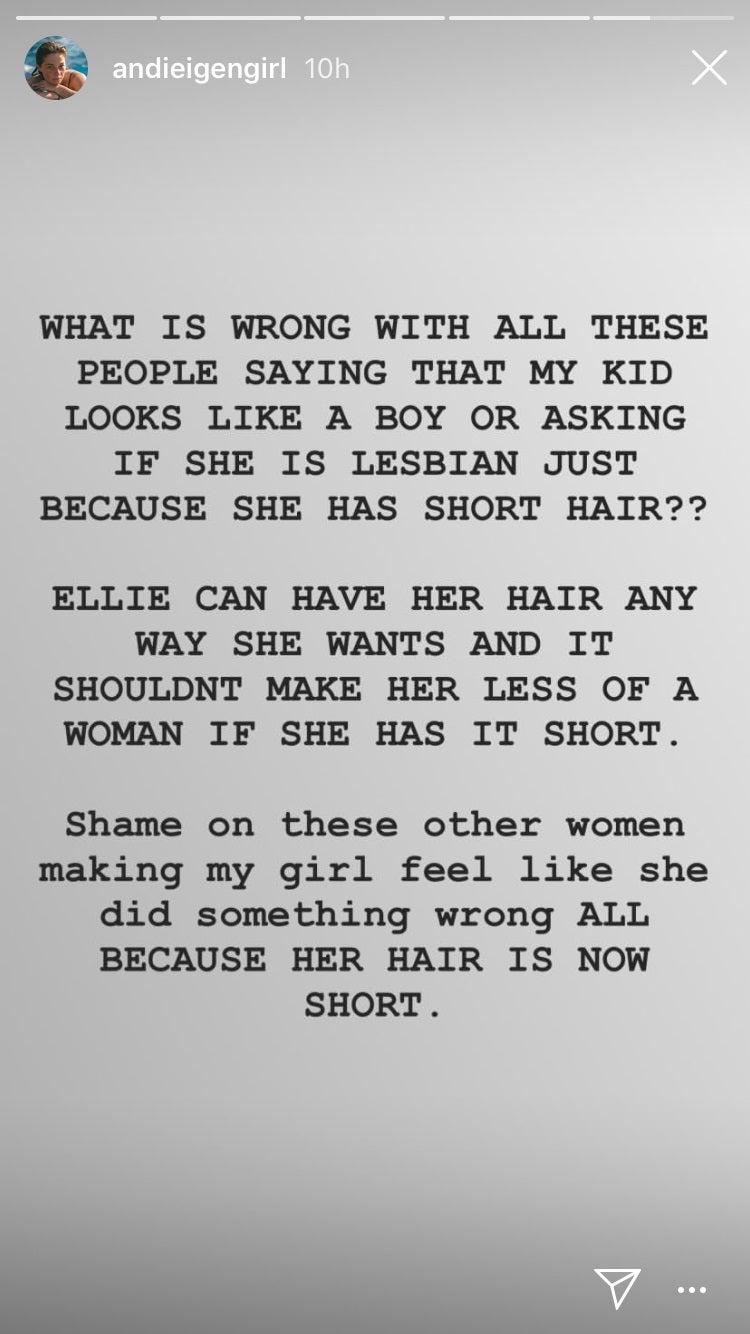 “What is wrong with all these people saying that my kid looks like a boy or asking if she is a lesbian just because she has short hair??” the caption read.

“Ellie can have her hair anyway she wants and it wouldn’t make her less of a woman if she has it short. Shame on these other women making my girl feel like she did something wrong all because her hair is now short,” it added.  /cbb