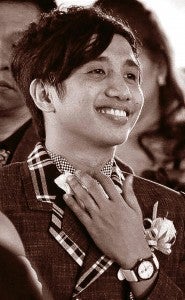 People have turned to social networking sites Facebook and Twitter to air their reactions to the controversial disqualification of a finalist in this year’s Cinemalaya Philippine Independent Film Festival.

The festival organizing committee has barred Emerson Reyes’ “MNL 143” from competing due to casting disagreements with its director and producer.

In a letter dated February 23,  competition committee chair Laurice Guillen-Feleo told “MNL 143” producer Nestor Abrogena that the committee “collegially decided on February 8 to exercise its prerogative and disqualify your entry from competition.”

The disqualification, Feleo explained in the letter, stemmed from Reyes’ insistence to cast actors Allan Paule and Joy Viado to play the lead roles in the film, which the committee had deemed “not suitable to the material.”

According to a source close to the “MNL 143” production team, Cinemalaya monitoring head Robbie Tan wanted Victor Neri and Francine Prieto to star in the film instead.

“MNL 143” is a black comedy about an overseas Filipino worker who, upon returning home, works as an FX cab driver. He meets interesting characters while trying to find his lost love, Mila.

Feleo’s letter further stated: “As you know, there is never any directive given to the finalists on who to cast—only our guideline as to how to cast. The basis of our interest in casting is that we want competence, suitability to the role, and greater audience acceptability.”

Reyes was to compete in the New Breed category,  whose finalists each receive a seed grant of P500,000 from the Cinemalaya Foundation.

Feleo insisted that the committee had always treated finalists “as partners [who] mutually look out for what is best for each project,” but that “MNL 143” did not heed Cinemalaya’s advice. She said this showed “a one-sided effort—only on our part—to achieve our objectives.”

On the other hand, Reyes, in a statement, pointed out that he joined the festival thinking he would be given the freedom to create a film not usually seen in cinemas. His experience with Cinemalaya, he said, was that filmmakers were not free to choose their actors and that everything had to conform to the tastes of the people running the festival.

Film critic Oggs Cruz, a member of the competition committee, said he was “disappointed and disgusted with Cinemalaya” and posted this comment on his Facebook wall: “May I remind Cinemalaya that … one of the reasons [that] you have a MOA (memorandum of agreement) with the filmmakers is because you want to ‘discover, encourage and honor their cinematic works.’”

Cruz said that, “under the MOA, a Cinemalaya film ‘is strictly an independent work,’ that the only duty of the committee is to monitor ‘all the stages of the production until the completion of the film.’ … Disqualification is not a part of monitoring.”

Cruz added that Reyes had not done anything that could be regarded as a breach of the MOA, but that (the committee’s) “act of disqualification is the breach itself, which will make it liable to damages.”

In his own Facebook account, Abrogena greeted Cinemalaya festival director Nestor Jardin, who incidentally celebrated his birthday on February 28, before saying, “Make sure you read it”—referring to Cruz’s comment. “(It’s) my birthday greeting to you!”

Abrogena urged Cinemalaya Foundation chair Tonyboy Cojuangco to “hear the filmmakers’ cry.” He then posted photos of Feleo, Tan and Jardin with their faces crossed out and with the headline “Reform Now: Cinemalaya needs to be free.”

Kicked out
Former Cinemalaya festival programmer Ed Cabagnot responded to Cruz’s comment by saying: “I wrote about a certain opening film last July and they kicked me out last November.” 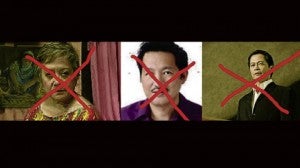 POSTED on Facebook, these crossed-out photos of (from L) Feleo, Tan and Jardin, with the exhortation: “Cinemalaya needs to be free!”

He was referring to his Facebook commentary titled “Filmmaking as a Public Self-Abuse” about Feleo’s film “Masskara,” which opened Cinemalaya 2011.

The festival runs from July 20 to 29 at the Cultural Center of the Philippines in Pasay City.