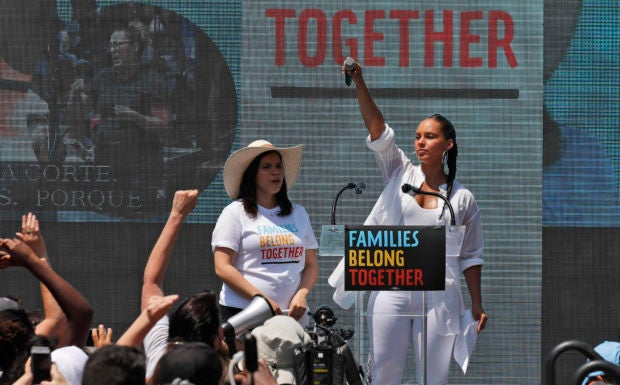 In this June 30, 2018 file photo, America Ferrera, left, with Alicia Keys, attends a protest against the Trump administration’s approach to illegal border crossings and separation of children from immigrant parents in Lafayette Square across from the White House in Washington. After paying a weekend visit to Central Americans stuck on the Mexican side of the border with the United States, Ferrera said Sunday, March 10, 2019, that she was enjoying first-time motherhood last June when images of migrant children being separated from their parents by U.S. officials began to emerge. She has led a small group of like-minded artists on a visit to migrants waiting in the Mexican border city of Tijuana for a chance to apply for asylum in the U.S. Image: AP/Alex Brandon

Actress America Ferrera led a small group of artists on a migrant shelter tour in the Mexican border city of Tijuana, across from San Diego, over the weekend. They dressed in casual clothes, with little to no makeup. They talked with immigration lawyers and shelter managers. They colored pictures with children. And they listened to harrowing tales of long treks through Mexico and beyond in hopes of starting a new life in the United States.

Those aspirations have become tougher in recent months as U.S. border agents process only a handful of asylum requests a day, creating backlogs and limited space at shelters in Mexican border towns. Most shelters can accommodate only a few dozen migrants at a time, while thousands of Central Americans have made the arduous journey north, fleeing violence and poverty.

Apprehensions by U.S. Customs and Border Patrol are higher than they have been in a decade.

Many of these migrants are from Honduras, like Ferrera’s parents.

“It is easy for me to look at these human beings and see myself,” the actress, who became a household name after her title role in the TV show “Ugly Betty”, said in a telephone interview Sunday. “This could very easily have been my reality in this lifetime.”

Ferrera has spoken out for migrants for years. But she said the urge to speak louder intensified after images of migrant children being separated from their parents by U.S. officials emerged last year.

She remembers holding her newborn at the time and trying to imagine the plight of the migrants: “How dire would my situation have to be to grab this brand new child and walk for a month, with no access to clean water and food, not knowing what I would meet along the way, to try and seek asylum and safety and refuge because my situation was so bad?”

Jessica Morales Rocketto, who heads the nonprofit advocacy group Families Belong Together, which organized the weekend trip, said one of the migrants the delegation spoke with has been waiting with her 1-year-old to apply for asylum since November. Another, a mother of a 4-month-old, gave birth while traveling in one of the migrant caravans, she said.

“People get to the border and think that’s the end of the journey, but it’s only the beginning,” said Morales Rocketto, who grew up in California and made frequent trips to a family dentist in Tijuana.

The visit was meant to inspire and educate actresses, storytellers and other influencers so they can better engage on an issue that matters to them, Ferrera said. The way Ferrera sees it, she has a responsibility as a citizen of the world to seek and speak truth.

“It’s depressing and at the same time marvelous to see the strength of these female warriors who, against wind and tide, walk for months for the wellbeing of themselves and their children. I’d like to have this mind and body of a giant,” she wrote.

Actress Kerry Washington concluded on Instagram that Families Belong Together is doing “God’s” work and called for donations to the charity. CC

Migrants hide inside mattresses in desperate attempt to reach Europe