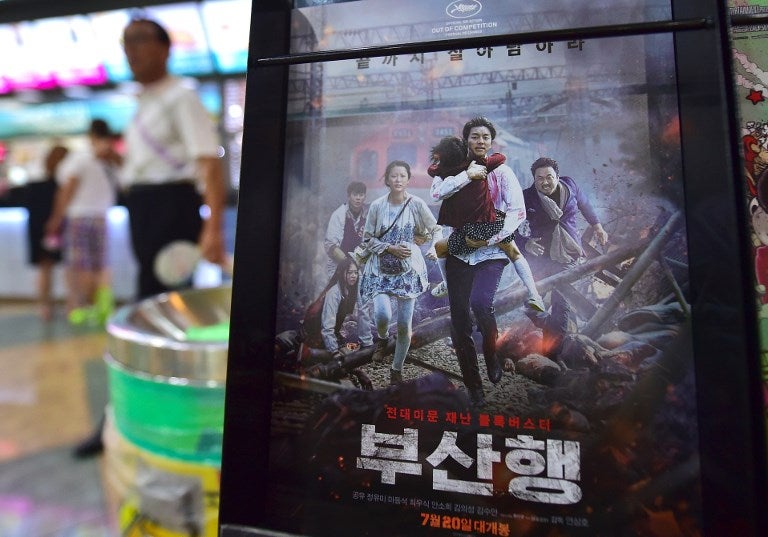 A man walks past a poster of the first South Korean zombie blockbuster, entitled “Train to Busan”, at a movie theater in Seoul on August 4, 2016. – The film depicts a group of people trying to survive a mysterious virus by boarding an express train bound for Busan, a southern port city that has fended off the nationwide viral outbreak. The accumulated number of ticket sales of the disaster film is expected to easily surpass 10 million by the weekend of August 6-7. (Photo by JUNG YEON-JE / AFP)

SEOUL — In recent years, the South Korean entertainment scene has been seeing a new trend of domestic supernatural thrillers stepping into the limelight like never before, ranging from dramas to films.

For instance, Korea had been mostly impregnable for local zombie stories, although foreign zombie productions, including the famed “Walking Dead” series, were popular here. But after the success of hit film “Train to Busan” in 2016, a zombie action thriller which sold more than 11 million tickets to become the 16th biggest hit here, home-grown zombie contents are becoming a profitable commodity.

In January, Netflix released a new original series “Kingdom,” a Korean zombie period drama. The streaming giant gave the green light for a second season, even before the first season aired.

But not all Korea-made zombie productions have enjoyed unprecedented success. In October, film “Rampant,” another zombie period story, failed, selling only 1.5 million tickets.

Other local films with the supernatural themes have also been making strides.

Film director Jang Jae-hyun set spark to the occult thriller film genre with “The Priests” in 2015. It portrayed the fight of two priests against a demon, and opened a new era for the genre, selling 5 million tickets.

This year, the director returned with the theme, with “Savaha: The Sixth Finger” in February. The film centers on the character of a Christian pastor, played by actor Lee Jung-jae, probing a mysterious religious group.

The small screen is not an exception to the occult theme, as shown by cable channel OCN, a major player in the occult thriller scene here.

The channel, under entertainment giant CJ ENM, has launched a string of original drama series since 2010. Since then, it has been creating action-packed series with dark humor — a quality unseen in the local drama scene.

The channel tasted success in 2017 with drama “Save Me” that deals with the crimes of a religious cult. The series’ lead actress Seo Ye-ji rose to stardom through the show. The 16-episode drama gained the highest viewership rating of 4.8 percent and is set to air its second season in May.

Fueled with success, last fall, the channel aired another occult thriller series “The Guest,” which presented a mix of exorcism and shamanism. The series featuring a psychic, a priest and a detective, marked the highest viewership rating of 4.1 percent. It will be adapted into a film.

Its successor “Priest” was a medical-exorcism drama, a collaboration of a doctor and an exorcist fighting supernatural crimes. But it received a lukewarm response from viewers, with its ratings peaking at just 2.5 percent, possibly due to the repetitiveness of the genre.

In March, OCN once again released a spooky supernatural thriller series “Possessed.” The Wednesday-Thursday series, however, takes a slight turn from the previous productions, adding the elements of a sweet romantic comedy. The series, featuring actress Go Joon-hee as a psychic, has already aired two episodes.